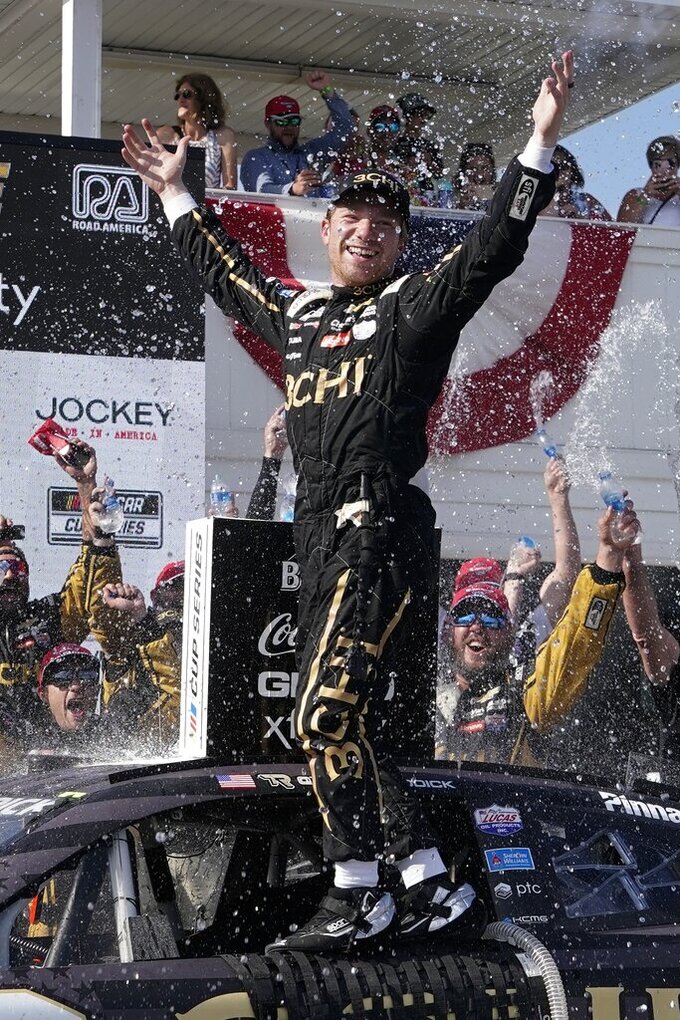 Fast facts: Reddick became the 13th different race-winner through 18 events and the fifth first-time winner this season. ... His victory made 2014 series champion Kevin Harvick, the fourth-ranked non-winner in the standings, the first driver who would not make the 16-driver playoffs if the standings remain the same through the final eight races of the regular season. ... Elliott expanded his points lead to 33 over Ryan Blaney and 35 over Ross Chastain. ... Blaney, Martin Truex Jr. and Christopher Bell are the non-winners in the top 16.

Last race: Ty Gibbs passed Kyle Larson on the last lap of overtime at Road America and won for the series-best fourth time this season.

Fast facts: Gibbs trimmed his deficit from 25 points to nine behind points leader AJ Allmendinger. Justin Allgaier is third, 34 points behind. ... Gibbs has won four times in 16 races this season and eight times in 34 races for his career; no other driver has won more than twice this season. ... Allmendinger registered his 14th top-10 finish of the season. Fourth-place Noah Gragson is next with 11.

Last race: Ryan Preece pulled away on a restart with 10 laps to go, then held off challenges from Zane Smith and Carson Hocevar to win at Nashville for the second year in a row.

Fast facts: Preece's two victories have come in just eight career starts. ... Zane Smith is the new points leader by 21 over John Hunter Nemechek and 30 over defending series champion Ben Rhodes. ... Smith also leads with eight top-five finishes, 12 top 10s and 339 laps led. ... The top five in the standings are the only series regulars to have won races this season.

Last race: Carlos Sainz Jr. won the British Grand Prix, his first career Formula One victory, when a late tire change allowed him to pull away.