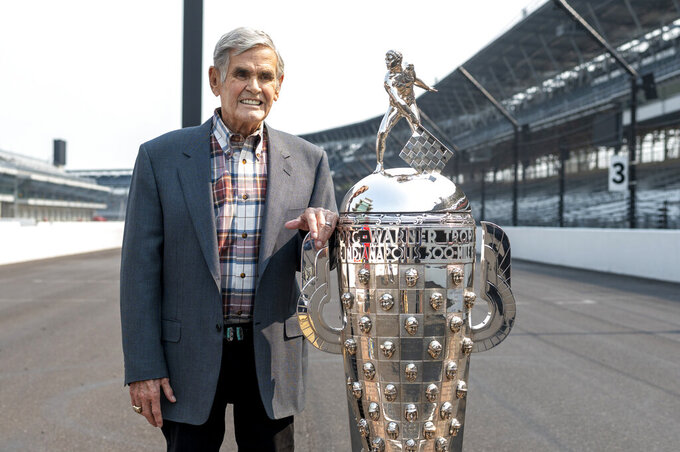 FILE - Four-time winner of the Indianapolis 500, Al Unser, poses with the Borg-Warner Trophy at the Indianapolis Motor Speedway in Indianapolis, Tuesday, July 20, 2021. Al Unser was the third member of one of America’s most-accomplished racing families to die in 2021, following his older brother Bobby, a three-time Indy champion, and Bobby Unser Jr. Al Unser was one of four drivers who won the Indy 500 a record four times, with victories in 1970, 1971, 1978 and 1987. (AP Photo/Doug McSchooler, File) 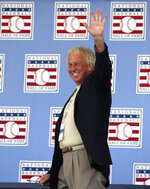 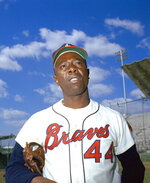 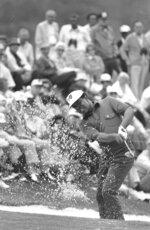 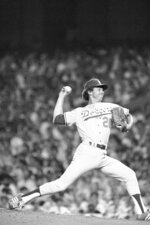 They both overcame racist threats to reach milestones that will always be part of sports lore. “Hammerin’ Hank” supplanted Babe Ruth at the top of baseball’s home run list and Elder became the first Black golfer to play in the Masters.

Their deaths in 2021 were mourned beyond the sports world and were reminders of the hate, hardships and obstacles they endured with dignity on their way to breaking records and barriers.

John Madden, the Hall of Fame coach turned broadcaster whose exuberant calls combined with simple explanations provided a weekly soundtrack to NFL games for three decades, died three days after Christmas. He coached the Raiders to the Super Bowl title following the 1976 season.

Aaron will always be remembered for hitting his 715th home run on April 8, 1974, at Atlanta Stadium to break Ruth’s record of 714. Aaron finished his Hall of Fame career with 755 homers, a record that was eclipsed by Barry Bonds in 2007. Some baseball fans consider Aaron the true home run king because of allegations that Bonds used performance-enhancing drugs.

Aaron received extensive hate mail as he closed in on Ruth’s cherished record, much of it because he was Black. Although he handled the threats with stoic dignity, Aaron kept the hateful letters and never forgot the abuse he faced.

“If I was white, all America would be proud of me,” Aaron said almost a year before he passed Ruth. “But I am Black.”

Aaron died in January and the Braves honored him all season, including painting his No. 44 on the center field grass at Truist Stadium for the World Series, which they won in six games over the Houston Astros.

One year after Aaron’s historic swing in Atlanta, Elder took a historic swing with his driver at Augusta National when he became the first Black golfer to play in the Masters, helping to open doors for Tiger Woods and others.

The Masters had been an all-white tournament until Elder received an invitation in 1975 after winning the Monsanto Open the previous year. He missed the cut at his first Masters but became a groundbreaking figure in a sport that had never been known for racial tolerance. Twenty-two years later, Woods became the first Black golfer to don a green jacket.

Elder developed his game during segregated times while caddying and hustling for rounds in his native Texas. He reportedly received death threats at the 1975 Masters that shook him so badly he rented two houses in Augusta so no one would be quite sure where he was staying for the week.

At this year’s Masters, Elder was invited to hit a ceremonial opening tee shot alongside greats Jack Nicklaus and Gary Player. Elder was not well enough to take a swing but he stood briefly and held up his driver while acknowledging the cheers of the gallery.

The football world recalled how Sam “Bam” Cunningham, an All-America fullback at Southern California, helped open doors for Black athletes in the South. A member of USC’s all-Black backfield, Cunningham was so dominating in his college debut in the Trojans’ rout at Alabama in 1970 that it influenced Crimson Tide coach Bear Bryant to widely recruit more Black players and accelerate the integration of the sport in the South. Cunningham went on to a successful NFL career with the New England Patriots.

Al Unser was the third member of one of America’s most-accomplished racing families to die in 2021, following his older brother Bobby, a three-time Indy champion, and Bobby Unser Jr. Known as “Big Al” after his son also became a racing star, Unser was one of four drivers who won the Indy 500 a record four times, with victories in 1970, 1971, 1978 and 1987. Unser was the only driver in history to have a brother and a son also win at Indy. Bobby Unser won at Indy in 1968, 1975 and 1981.

Lasorda was the fiery Hall of Fame manager who spent a total of 71 seasons in the Dodgers organization, in Brooklyn and Los Angeles, as a player, coach and then manager for 21 years. He led Los Angeles to World Series titles in 1981 and 1988, and was fond of saying, “I bleed Dodger blue.” At 93, he had been the oldest living Hall of Famer.

Baseball lost three notable former players, Hall of Famer Don Sutton, Ray Fosse and J.R. Richard. Sutton won 324 games with five teams. Fosse was the strong-armed catcher whose career was upended when he was bowled over by Pete Rose at the 1970 All-Star Game and later was a beloved broadcaster with the Oakland Athletics. Richard was an intimidating right-hander for the Houston Astros in the late 1970s before suffering a stroke during the 1980 season that ended his big league career.

At 100, Eddie Robinson had been the oldest living former major league player. His more than six decades in professional baseball included being general manager for Atlanta and Texas. Baltimore fans mourned the loss of Joe Altobelli, who managed the Orioles to the 1983 World Series title.

Baylor was remembered for bringing a trailblazing aerial style to the NBA and was the Lakers’ first superstar in Los Angeles. Although he never won a championship, his silky smooth jumper and fluid athleticism carried him to 11 All-Star games and the Hall of Fame and helped revolutionize the game with a style that set the tone for modern players. He teamed with Jerry West in one of the most potent tandems in hoops history.

West once called Baylor “one of the most spectacular shooters the world has ever seen.” The Lakers honored him with a statue outside Staples Center in 2018. He also spent 22½ years as GM of the Los Angeles Clippers.

The NBA also remembered Paul Westphal, a Hall of Fame player who won a championship with the Boston Celtics in 1974 and later coached in the league and in college, and Mark Eaton, who used his 7-foot-4 frame to block shots and win two Defensive Player of the Year awards. Bob “Slick” Leonard was remembered for his outstanding playing career in college and the pros, and his coaching accomplishments. Also gone was Hall of Famer Sam Jones, the Boston Celtics’ “Mr. Clutch” whose sharp shooting fueled the league’s longest dynasty and earned him 10 NBA titles — second only to teammate Bill Russell.

Bowden was the beloved, folksy Hall of Fame coach who took Florida State from an afterthought to one of the most prolific college football programs in history. Bowden had 377 wins during 40 years as a major college coach and his teams won a dozen Atlantic Coast Conference titles, and national championships in 1993 and 1999. The Seminoles finished the season ranked in the top five of The Associated Press college football poll an unmatched 14 straight seasons (1987-2000).

Alabama coach Nick Saban called Bowden “probably the greatest ambassador of all time ... He wasn’t always just about him; he was always about helping other people.”

The boxing world mourned the deaths of former heavyweight champion Leon Spinks and Marvelous Marvin Hagler, one of the greatest middleweights in history. Spinks, who had an easygoing personality and a big grin that often showed off his missing front teeth, won an Olympic gold medal and then shocked the boxing world by beating Muhammad Ali to win the heavyweight title in only his eighth pro fight in 1978. Spinks lost the rematch seven months later before 72,000 fans at the New Orleans Superdome and a national television audience estimated at 90 million people. Spinks fought for the title only once after that, when he was stopped in the third round in 1981 by Larry Holmes. He finished with a record of 26-17-3.

Hagler fought on boxing’s biggest stages against its biggest names, as he, Sugar Ray Leonard, Thomas Hearns and Roberto Duran dominated the middleweight classes during a golden time for boxing in the 1980s. Quiet with a brooding public persona, Hagler finished 62-3-2 with 52 knockouts.

Medina Spirit suffered a heart attack and died after completing a workout at Santa Anita in suburban Los Angeles on Dec. 7. The 3-year-old colt’s Kentucky Derby victory in May came under scrutiny because of a positive test for betamethasone, a legal medication that is not allowed on race day.

The hockey world mourned the loss of Hall of Famers Tony Esposito, the goalie who helped popularize the butterfly style, and Rod Gilbert. Also gone were Walter Gretzky, who built a backyard rink that helped turn his son, Wayne, into the Great One, and Mark Pavelich, a member of the “Miracle on Ice” team.

Jacques Rogge, a former Olympic sailor and orthopedic surgeon, was remembered for a bringing stability to the International Olympic Committee in his 12 years as president and for pursuing a hard line against doping.

The Pro Football Hall of Fame mourned the loss of four of its members, Sam Huff, Curly Culp, Floyd Little and Claude Humphrey. Marty Schottenheimer was remembered for coaching 200 NFL victories with his brand of smash-mouth football. Former NFL stars Demaryius Thomas, Vincent Jackson and Darrius Johnson were gone way too soon. Also gone were two-time Super Bowl winning defensive back Mike Davis of the Raiders and Ted Thompson, the Green Bay Packers GM who drafted Aaron Rodgers when they already had Brett Favre on the roster and won a Super Bowl.

Other notable sports figures who died in 2021 were Gerd Müller, who scored the winning goal for West Germany in the 1975 World Cup final against Holland; Tony Trabert, who won three of tennis’ four major singles titles in 1955 and five overall; former Olympic swimmer Clara Lamore Walker; and track star Milkha Singh of India.