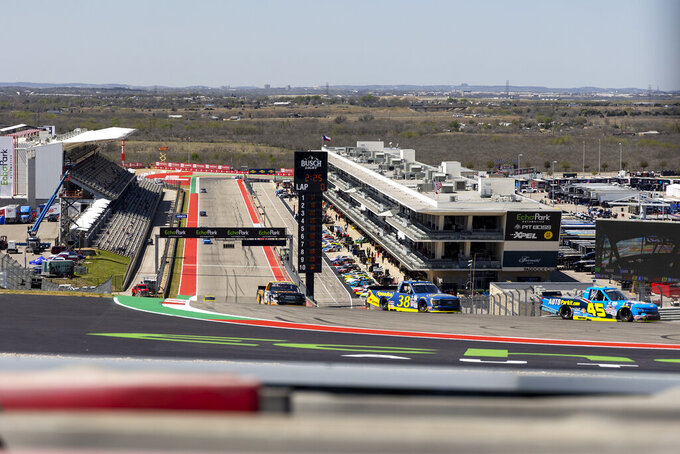 Zane Smith (38) and Lawless Alan (45) go through Turn 1 during practice for the NASCAR Truck Series auto race at Circuit of the Americas, Friday, March 25, 2022, in Austin, Texas. (AP Photo/Stephen Spillman)

AUSTIN, Texas (AP) — Zane Smith inherited the Truck Series win at Circuit of the Americas on Saturday when a three-wide move for the lead went awry and Smith sailed past his rivals for the victory in double overtime.

Kyle Busch led a race-high 31 of the 46 laps around the permanent road course and was desperately trying to stretch his fuel to the finish when the race went haywire. Alex Bowman moved from third alongside Stewart Friesen, who tried to defend the pass by diving inside of Busch.

All three trucks were side-by-side as the drivers dove into a turn. Unable to maneuver through, the trucks slid off course and Smith shot past the leaders to take over the top spot.

Smith was able to drive away from the challengers as Busch and Bowman both tried to regain position. He scored his fifth career victory and second through four races this season. Smith also won the season-opening race at Daytona in his Ford for Front Row Motorsports.

“Truck races are crazy, you are never out of it until it's over,” Smith said after collecting the checkered flag. He won all three stages and led 11 total laps.

John Hunter Nemechek finished second in a Toyota, followed by Busch, his boss. Kyle Busch Motorsports driver Chandler Smith was fifth to give KBM three trucks in the top five.

But it wasn't enough for Busch, the winningest driver in Truck Series history.

“Felt like we deserved that win, but it doesn't matter if you deserve it or not. It's all matter of ... you've got to be the first one to the checkered flag in these things,” Busch said. “We just weren't.”