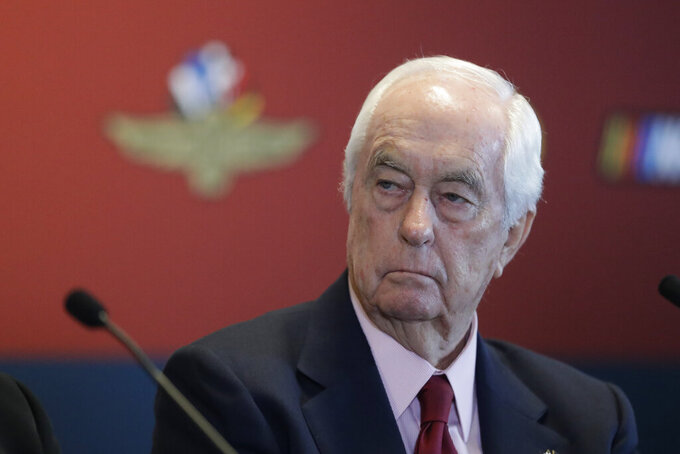 CHARLOTTE, N.C. (AP) — Roger Penske will watch the IndyCar season opener from a suite at Texas Motor Speedway — his first time off the pit stand and on the other side of the fence since his teams failed to qualify for the Indianapolis 500 in 1995.

His relocation is partly for safety. At 83, Penske is considered at high risk for the coronavirus and he will avoid large crowds by working inside the paddock from a transporter separate from the rest of his team. But as the new owner of the IndyCar Series, he has also relinquished his role as a strategist for Team Penske to avoid conflicts of interest.

“I don’t know if I will be able to stand it. We’ll have a conversation after the show. I guess it will be like a NASCAR race,” Penske, who watches NASCAR events from a suite, said in an interview with The Associated Press.

The pandemic has disrupted Penske's first year as owner of iconic Indianapolis Motor Speedway and the IndyCar Series, which suspended its season March 13 just 48 hours before its opening race in Florida. The schedule has been overhauled, his beloved Indianapolis 500 moved to August from the Memorial Day weekend date it held for 73 years, and Penske has spent nearly six months focused on improvements for his newest properties.

Penske said he is at IMS at least two days a week overseeing massive upgrades. He is involved in every detail, from freshening public bathrooms to paving parking lots, lowering television monitors and creating a lift to an elevated winner's circle.

Fans won't get a true sense of the changes to the national landmark built in 1911 until at least August. Its first event, a doubleheader between NASCAR and IndyCar Series, will run July 4 weekend without spectators. In making that decision earlier this week, Penske said it moves the speedway closer “to execute with full fans” for the Indy 500.

“We really wanted to go forward with fans but it wasn't realistic,” Penske said. “If we had fans and had any problems, that would absolutely close the door on for us for the 500.”

Penske said he travels from his Michigan home to Indianapolis twice a week and wears gloves and a mask while working. His Bloomfield Hills office is a three-minute drive from his home and he said a nurse is on site and “everybody has to go through a temperature check.” Penske, a cancer survivor who received a kidney transplant in 2017, said Penske Corp. practices social distancing at work and at its North Carolina race shop.

“I’ve been at home with my wife and have been careful on any interface,” he said. “All my transportation has been from Pontiac Airport to Indianapolis and back. I’ve not gone downtown. I haven’t gone anywhere. I’m not, you know, in trouble.”

He said most of his meetings are done over Zoom and are scheduled in shifts throughout the day so he can conduct business globally.

“We start early in the morning in the U.K., then we do our U.S. businesses and then we talk to Australia at night. It's been a good tool,” he said.

The coronavirus has given Penske additional time to raise the speedway to his standards. All work on the track was halted early in the pandemic under stay-at-home orders, but moving the 500 to August allowed time for capital improvements.

He often likens his visions for the speedway to pristine Augusta National.

“Every time I walk around I find something else to do,” he said. “I thought there were only so many chapters in the book. Every time I get to the last chapter, there’s one or two more to look at. Time is always beneficial.”

He said new video boards at the speedway would not have been in place for the 500 if had been run in May as scheduled.

START OF THE SEASON

Penske said he is proud of IndyCar's top two leaders, Mark Miles and Jay Frye, for getting the season on track. The series will practice and qualify before Saturday night's race, unlike NASCAR, which has cut both so far.

He said both worked to get the series' foreign drivers back into the United States in time for the opener, and, Penske believes IndyCar's teams have largely weathered the financial shutdown.

“They’re all ready to go racing ourselves. No question about it,” he said.

As for his own team of reigning champion Josef Newgarden, and back-to-back Indy 500 winners Simon Pagenaud and Will Power: “Texas at those speeds, I told them they are going to have to have their heads on."

Team Penske has four wins through nine races even after the boss swapped all three crews for drivers Ryan Blaney, Brad Keselowski and Joey Logano.

Logano won two before the shutdown and Blaney inked a contract extension. Keselowski, in a free agent year, won two Cup races last week and is fourth in the standings.

“I certainly am not saying he’s not going to run for us,” Penske said of Keselowski. “We have to talk to Brad and we have not done that during this pandemic. Quite honestly, we’re not negotiating something with a driver over Zoom. We’ll get together with him.”

He said Team Penske is working in split shifts at the shop for social distancing, and he's holding out for economic impact analysis before he gives an opinion on NASCAR's frantic current schedule. To make up its postponed events, the three national series raced nine times over 15 days. There have been two midweek races and all have been without spectators.

“We’re happy with the outcome of operations but I think the more important thing is what’s the impact on the sport? You know, what do our races look like in the future?" said Penske. “As competitors and for our sponsors there's a comfort level that we’re back racing. Now is a time to see what we can do moving forward for both NASCAR and IndyCar.”