Montoya gets rare chance to team with teen son at Sebring 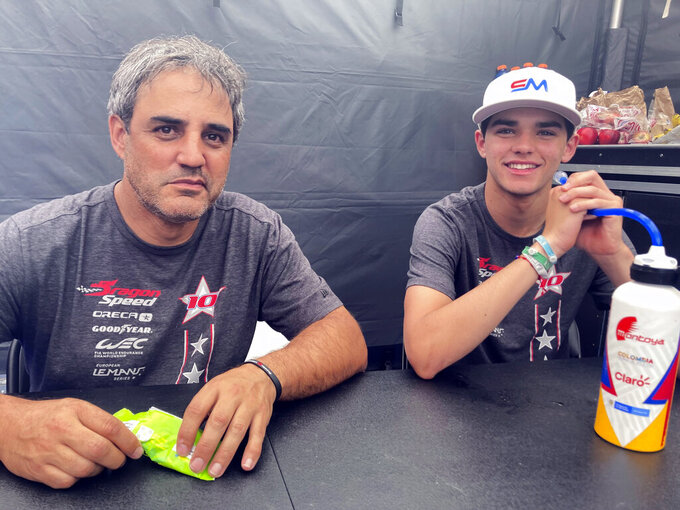 Juan Pablo Montoya, left, and his 16-year-old son, Sebastian Montoya, prepare for practice for the Twelve Hours of Sebring auto race, Thursday, March 17, 2022 at Sebring International Raceway in Sebring Fla.. The father and son will be teammates in Saturday’s race. (AP Photo/Jenna Fryer) 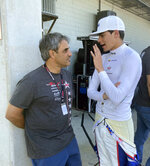 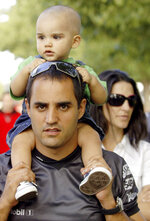 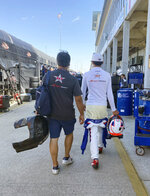 SEBRING, Fla. (AP) — Sebastian Montoya has been at race tracks since he was just a baby, propped on his father’s shoulders in the Formula One paddock.

He is now a month away from his 17th birthday and building his own racing career, a journey that brought him to Sebring International Raceway this weekend for the biggest race of his life: Juan Pablo Montoya will team with his son -- “Montoyita” -- in the Twelve Hours of Sebring.

The father and son are sharing the car that won the LMP2 class at the 24 Hours of Daytona with a different lineup. The DragonSpeed USA entry qualified second in class Friday with Henrick Hedman, the third driver in the lineup.

This opportunity to race alongside his father will be a stark difference from their current relationship in which Montoya coaches and mentors Sebas as he climbs through the European junior ranks. He has spent his entire life following his father through F1, IndyCar and NASCAR paddocks, where Montoya has won at every level in building a resume that includes a pair of Indianapolis 500 victories and the 1999 CART championship.

“It's different because when he's a dad at the racetrack, he's my coach. Now he's my teammate,” Montoyita told The Associated Press. “I don't have to beat him. I actually have to work with him and I like it quite a lot. He knows his way around many cars so his experience has made my life a lot easier.”

Montoya is still a typical racing dad with high expectations for his son. He always said he'd let his children decide if they wanted to race — he and wife, Connie, have Sebastian and two younger daughters — and as his son moved up into bigger cars and began to enjoy competing, they decided to pursue his career.

The entire family left their longtime home in Miami, with the racers now based in Monaco and Connie and the girls in Madrid. They all come together on race weekends and watch with amazement as Sebastian impresses a father not easily impressed by anything.

“Even when he does good, he hates it because I will criticize something,” Montoya told AP. “I tell him ‘You did great, but...' and he hates the ‘buts’ but he learns where the but comes from. We have a really good working relationship. In a way you can say we've created a monster because he's really switched on."

Montoya drove for DragonSpeed last year and the team asked to test his son at the end of 2021. When Montoyita was faster than his father, he landed the Sebring deal and an opportunity to not only compete in the same race with Montoya but as his teammate.

The 12-hour race will be a test for Montoyita, who runs 30-minute races in Europe: A single stint at Sebring is 38 minutes and most drivers double and triple stint each time in the car. But should Montoyita do well, there's an opportunity for him to become DragonSpeed's additional driver in the remaining endurance races on the IMSA schedule.

His son is partly why Montoya continues to race as he approaches his 47th birthday in September. His job with DragonSpeed and a deal to run at Indianapolis for a second consecutive year with Arrow McLaren SP keeps Montoya in the paddock, where his son can tag along and soak up everything he needs to know for his own career.

At Sebring, where the steamy temperatures have been in the mid-90s all week, Montoya's main concern is that his son hydrates. At 130 pounds, he's a string bean next to his father and has been warned not to follow his father's example. “I'm a camel. I'm fine,” Montoya said.

They have different temperaments, Montoya said, and both Colombians have tremendous tempers. But Montoya insists he is able to calm down after a few minutes, where his son, while mostly mellow, hangs on to his anger longer.

The main difference is in their confidence. Montoyita is not yet like his father, who famously raced wheel-to-wheel and refused to lift against the likes of Michael Schumacher and Michael Andretti.

“I can tell you his biggest weakness; he doesn't know how good he is,” Montoya said. "But he's starting to figure it out. When you know you are good, you don't need to work so hard. You've still got to drive the (expletive) out of it, but your mindset is very different. Your mindset is, ‘I got this, I am just going to go out there and do it.'

“When I was young and driving for Chip Ganassi in IndyCar, the car was very easy to drive and very good, and I knew if I just drove the (expletive) out of it, I would be quicker than everyone,” Montoya said. “So I never cared and I just went out and did it and if I screwed up, then I ended up second. He needs to start thinking like that.”

Montoya wants to take his son to F1 but the path is not so easy. Montoyita, who lists “Dad, (Ayrton) Senna and (George) Russell” as his favorite drivers and says he's “all-in on Mercedes this year in F1,” is open to racing anything.

“I love racing so wherever it will be, I will do my best, whether it is Formula One, endurance racing, IndyCar, even NASCAR,” Montoyita said. “I'm open for anything and just want to do as good as I can.”

A record-breaking lap by Sebastien Bourdais put Chip Ganassi Racing on the pole for the Saturday morning start of the Twelve Hours of Sebring and Cadillac locked out the front row.

Bourdais in the No. 01 Cadillac turned a lap at 1:45:166 to win the pole for teammates Renger van der Zande and Ryan Hunter-Reay, who is making his Ganassi debut at Sebring. The Ganassi car edged rival Cadillac team Action Express Racing, the defending IMSA champions, with Pipo Derani qualifying second.

Bourdais won the race last year racing in a Cadillac for JDC-Miller and this year broke the DPi record by over two-tenths of a second. The top four cars in qualifying all went under the existing class record.

The No. 48 Cadillac that is a partnership between Action Express and Hendrick Motorsports qualified fifth with Mike Rockenfeller.