Keselowski looks to heat up market with 2nd Charlotte win 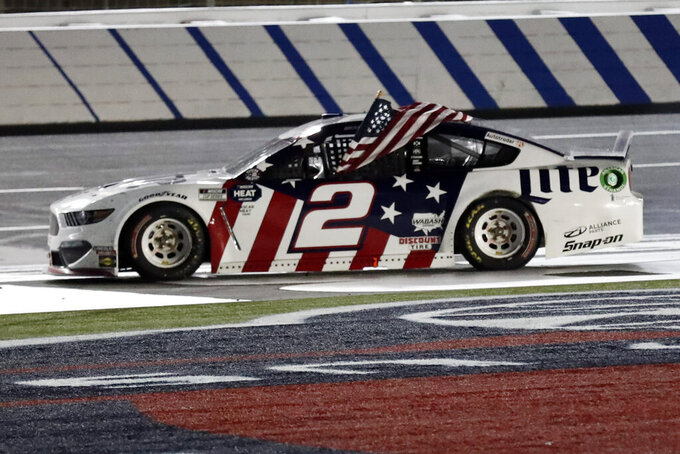 Keselowski is in a contract year during a season disrupted by the coronavirus pandemic. Business was closed for 10 weeks, meaning zero movement between Keselowski and Team Penske.

The first driver to give Roger Penske a NASCAR championship — first in the Xfinity Series and then, finally, in 2012, a Cup title — has been idling all year year. Then a caution with two laps remaining at Charlotte Motor Speedway cluttered Elliott's clear path to the win and gave Keselowski an opening.

Elliott pitted and Keselowski's new crew chief Jeremy Bullins called for his driver to stay on track, cycle into the lead and try to out-muscle seven-time champion Jimmie Johnson in a two-lap overtime sprint to the finish.

“We just committed to taking the front row and take a shot at the restart,” Bullins said. “Not many people I’d rather have in that situation than Brad.”

Keselowski got a terrific launch, cleared Johnson and pulled away for the Memorial Day victory. Indianapolis 500 victories by Will Power and Simon Pagenaud in 2018 and 2019, paired with Keselowski's steal in the 600, gave Penske three consecutive Memorial Day weekend wins.

Now Keselowski returns to Charlotte Motor Speedway for a Wednesday night race and a shot at consecutive victories. Kevin Harvick, Denny Hamlin and then Keselowski have won the three Cup races since the season resumed.

Bullins is bringing a new Ford built by Team Penske. This is a big stretch for the No. 2 team to prove it should remain intact beyond this season. The financial losses during the pandemic will likely cause yet another driver salary reset and Keselowski, the only Cup champion available, is probably at the highest end of free agent salaries.

Roger Penske said the pandemic has prevented any meetings with Keselowski.

Keselowski believes he and Bullins are settling in well after four races to start the season, the shutdown, and now four races in 11 days. Bullins previously worked with Keselowski in the Xfinity Series and said the foundation is strong.

“There’s always been a good trust and good relationship with him,” Bullins said. "I know where he’s coming from. I feel like we understand each other well. We’ve always worked together well. It was kind of like we hit the ground running again.

“It took a couple races to figure out the feel that he needed in the cars, what we needed to do better for him. I feel like we’ve been getting a lot closer with that every week.”

A look at other hot topics headed into Wednesday night at Charlotte:

ANOTHER CHANCE FOR ELLIOTT

Sooner or later, Elliott is going to get a break based solely on the way his Hendrick Motorsports team is performing.

Elliott was crashed by Kyle Busch on the final lap of last Wednesday night's rain-shortened race at Darlington Raceway as he tried to seize the lead. Then he had the Coca-Cola 600 wrapped up until teammate William Byron brought out a caution with two laps remaining.

Even though the leader all night clearly benefited from clean air, Elliott not only pitted from the lead but took four tires for a lengthier pit stop. It dropped him to 11th on the restart with just two laps remaining and he worked his way to third. He was later scored second when teammate Johnson was disqualified because his car failed post-race inspection.

Elliott was terse after his second defeat in four days.

“You just make the best decision you can based on the information you have,” Elliott said. “When you are leading the race like that, people behind you are going to do the exact opposite of what you do. That was the situation we were put in.”

Both Keselowski and Busch could empathize with Elliott's heartbreak at Charlotte. Keselowski spoke with Elliott as the two switched spots in front of a laptop during the post-race Zoom media availability. Busch went to Elliott's car on pit road immediately after the race.

“I felt bad for him,” Busch said. "He’s taken it a heck of a lot better than I ever have. I certainly was never very good at disappointing races. He’s doing good and (I) just told him to keep going forward and go get the next one.”

Elliott and his Hendrick Motorsports team have been very strong through the first three races back. Elliott finished fourth at the first Darlington race, then was in position to win the next two races. Teammates Byron, Johnson and Alex Bowman have also fared well, showing the organization was well-prepared after the shutdown.

But Elliott's team has been the most consistent late in races and Wednesday brings another chance for the driver to finally get his first win of the season.

Hamlin, winner last Wednesday night at Darlington, returns to Charlotte with three new crew members after a costly penalty to the Joe Gibbs Racing team. Tungsten fell off Hamlin's car on a pace lap before the Coca-Cola 600, an infraction that draws an automatic four-race suspension for the crew chief, car chief and engineer.

The replacement crew will be thrown into the fire. These return races are done in one-day shows without practice and qualifying was only held for the Coca-Cola 600. Wednesday night's race is just 310 miles, a breeze compared to Sunday night when overtime pushed the race to 607.5 miles, the longest in NASCAR history.

“Obviously, you’ve got a shorter distance to accomplish what you need,” Hamlin said. "Tire and fuel mileage strategy will be different, and we’ll have shorter stages to work within. This one will be more of a sprint than a marathon.”