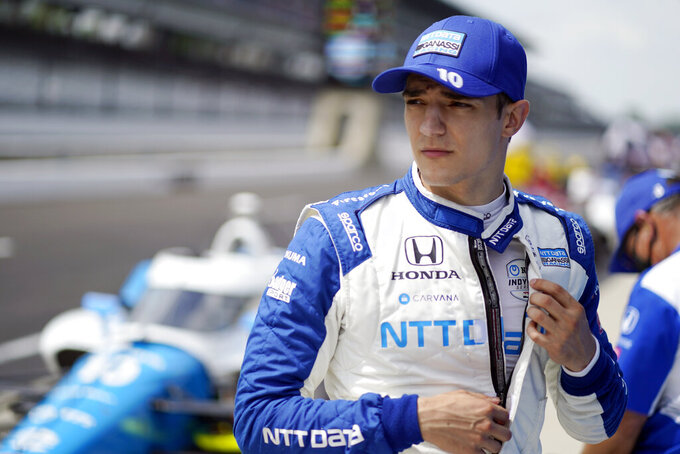 MONTEREY, Calif. (AP) — Nearly two dozen fans stood in the California morning chill waiting patiently for their chance to take a selfie with The Phoenix.

There's always a steady line around Romain Grosjean, who patiently works his way through the crowd accommodating as many fans as possible because this outpouring of appreciation was such a pleasant surprise in his transition from Formula One to IndyCar.

They come waving his merchandise, and supplies are hard to keep in stock. It's next to impossible to get the hat branded “The Phoenix” — the acknowledgement to Grosjean's F1 crash last November in which he walked out of a ball of fire. The fans often bring him shirts representing the local fire company because firefighting is forever linked to the Frenchman, who still has offseason surgery scheduled on his badly burnt left hand.

Grosjean estimates he's been gifted at least 15 shirts — Sunday's race at Laguna Seca is the 15th of the season — and the one handed to him Saturday shot to the top of his list of favorites.

Grosjean, along with seven-time NASCAR champion Jimmie Johnson, Australian supercars great Scott McLaughlin, and newcomers Alex Palou and Pato O'Ward have completely changed the face of IndyCar this season. As the season speeds to its close next Sunday in Long Beach, IndyCar has a lineup of superstars who run nose-to-tail on the track as competition has never been tighter.

The series takes great pride in that the Indianapolis 500, run in May with about 150,000 in attendance, unofficially re-opened America, and its rules in the pandemic for garage access has led to a 100% vaccination rate for its drivers and nearly 95% of the rest of the garage. No IndyCar driver has missed a race during the pandemic due to illness.

So the mood under second-year owner Roger Penske is bullish as significant shifts are being made to continue to grow IndyCar.

Palou is in his second season in IndyCar but first driving for Chip Ganassi Racing as the teammate to six-time and reigning champion Scott Dixon. Nobody had heard of the 24-year-old Spaniard when he fulfilled his childhood dream by turning two seasons of racing in Japan into a shot in the IndyCar Series.

Now he takes a 25-point lead over O'Ward into Saturday's race at Laguna Seca with a mathematical chance to win his first major racing championship with one race remaining. Although he's never before raced the 11-turn, 2.258-mile permanent road course, his temperament seems suited for the precision required on the winding circuit.

O'Ward, a 22-year-old hoping to eventually advance to F1, hasn't been as consistent this season and his aggressive style might be a challenge for O'Ward during the race. He wobbled in Saturday practice, right before a hard crash by Dalton Kellett stopped the session for a cleanup of more than 12 minutes.

It robbed Johnson of critical practice time for the IndyCar rookie who turned 46 on Friday — he was gifted a T-shirt that read “Girl Dad” in reference to the two daughters who knocked about 20 years off his appearance by convincing him to shave his longtime beard. Johnson is making steady gains in the series and although his best finish is 19th, twice, he's yet to finish last in either practice or qualifying and last week's race at Portland was his most complete of the year.

Now his midlife career change is in the homestretch with races at two tracks the California native always hoped to someday drive. When the series closes next week at Long Beach, Johnson will have come full circle on an event he attended with his parents and two brothers, proudly hanging off a fence watching Indy cars sail past.

“I always wanted to come here and drive something, and that quickly became an Indy car in my dream. To finally be here is really cool,” said Johnson, who had never even before visited the track that overlooks the Pacific Ocean before he tested on it last November.

The race Sunday will start the winding down on a 2121 season that could be the last of this era. Ryan Hunter-Reay is out after 12 seasons, an Indianapolis 500 and IndyCar championship with Andretti Autosport. He's expected to be replaced by Grosjean in the first of sweeping changes across the grid.

Two-time Indy 500 winner Takuma Sato is looking for a seat and Dale Coyne says he's talked to Sato about the vacancy at Coyne after Grosjean leaves. But as driver/owner Ed Carpenter noted, everybody is talking to everybody right now and drivers are searching for every sponsorship dollar possible.

The payoff for 2022 is a schedule that will have a record number of races on NBC when its announced, expected to happen ahead of Sunday's race. Johnson and Grosjean both seem committed to entering the Indy 500, and the two have been the best IndyCar marketing tools in years.

At Portland, a crowd stood outside O'Ward's truck all three days singing in Spanish, trying to coax the Mexican out for a meet and greet. He generally obliged.

The passion has surprised Grosjean, who said he can't quite figure out why so many are drawn to him. He suspects its because people are moved by his story from near-death experience in Bahrain last year to this road-trip across America that has completely changed his life and love for racing.

“We race for us, but also for the fans and we wouldn't be able to do our jobs without them,” Grosjean said. “Their support has just made this year so special. They love to see that I am happy and I love this and I love IndyCar, and I see they love it, it's just a gift for both sides.”