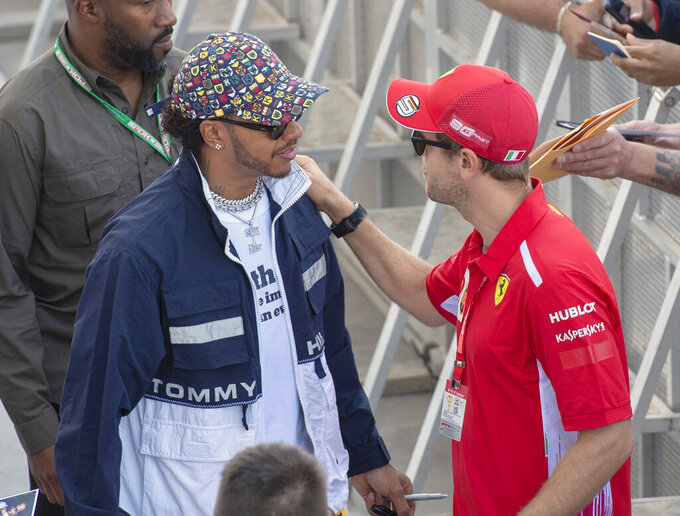 The four-time world champ and current leader in the standings said Thursday the vast separation between the top teams and the lower teams is hurting the sport. Mercedes has won all six races this season and will look to make it seven in a row at the Canadian Grand Prix on Sunday.

"You should be so physically exhausted after a race," he added. "It should be so exhausting, like a marathon. I could probably do two or three races in a row, and Formula One should not be like that."

A win for Hamilton this weekend would tie Michael Schumacher's record for most victories at Montreal's Circuit Gilles Villeneuve with seven.

The 34-year-old has already taken four checkered flags this year. Teammate Valterri Bottas won the other two races. Mercedes leads the constructor standings with 257 points, nearly twice as many as second-place team Ferrari, which has 139 points.

Only six drivers from three teams have finished in the top five this season: Mercedes' Hamilton and Bottas, Ferrari's Sebastian Vettel and Charles Leclerc and Red Bull's Max Verstappen and Pierre Gasly. No other team has come close to the podium.

The disparity between teams goes well beyond this year. Mercedes has won the last five F1 championships while Red Bull won the previous four.

"Look at the NHL, the NFL, the NBA, the teams are so close," the 20-year-old Stroll told The Canadian Press. "That's because it's capped properly, it's managed properly. That allows for exciting competitions. It would be great to see the same thing in Formula One. Instead of 2 seconds between the field, it comes down to tenths. That would really spice things up."

Stroll is one of the drivers usually stuck in the middle of the pack, well behind Mercedes, Ferrari and Red Bull. Stroll ranks 16th in the standings with four points from his first six races. He finished ninth in Australia and Azerbaijan. Stroll's last two races were challenging though. He collided with Lando Norris in Barcelona and was forced to retire after 44 laps. Two weeks ago in Monaco, he finished 16th.

"The last couple of events haven't suited our car," said Stroll, the first Canadian on the grid since Jacques Villeneuve. "There are things I need to work on too. It's a new car for me. We want to be more consistently in the points and fighting in the front."

A year ago, Stroll crashed out of Canadian Grand Prix on the very first lap after colliding with Brendon Hartley of Toro Rosso.

"It's got a lot of character," said Stroll of the track. "You're riding the curves. There's not a lot of room for error. Long straights that allow for good overtaking. As a driver, that makes the weekend very exciting. It's a proper race. It's great for the fans."