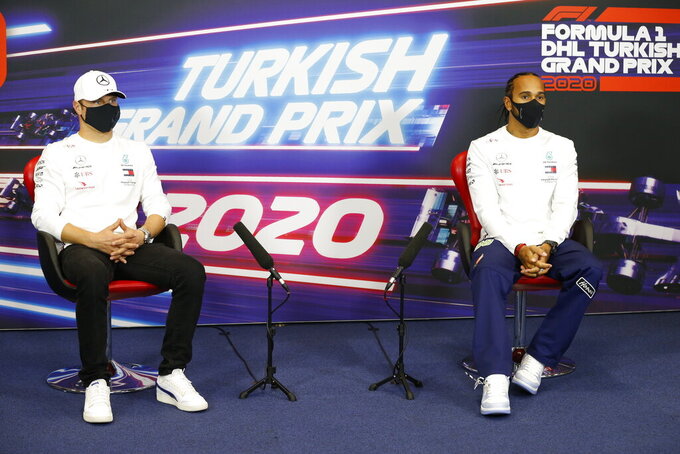 Having already broken the record for Formula One race wins, Lewis Hamilton can equal the mark for championship titles this weekend at the Turkish Grand Prix.

“It was far beyond my wildest dreams thinking that we’d get to seven,” said Hamilton, who won his first world title with McLaren in 2008 but only added his second in 2014 after leaving to join Mercedes. “Getting one world championship was great and then it was very tough obviously to get the second."

Hamilton has dominated the sport since that move to Mercedes and this season the British driver broke Schumacher’s record of 92 race wins. He is looking for his 94th on Sunday, and enters the race with an 85-point lead over Bottas in the championship standings.

The Finnish driver needs to score eight points more than Hamilton in Istanbul to keep his challenge alive. Hamilton could even clinch the title in some scenarios even if he finishes behind his teammate, for instance if Bottas is third (15 points) and Hamilton places sixth (eight points) or better. If both fail to finish Sunday's race the title will be Hamilton's, with only 78 points available in the three races to follow.

Regardless of whether he clinches this weekend, a seventh title seems inevitable for Hamilton, who has nine victories from 13 races this season, including the past three GPs.

The only doubt surrounding him these days is whether he will sign a new contract with Mercedes, or if he'll quit F1 at the age of 35 and pursue other interests like fashion and music.

“Believe it or not, I haven't got it set in stone. I haven't got all the answers to what I want to do yet,” Hamilton said. “I believe I have the best contract that there is, in terms of how it’s structured and time management. ... (But) there's a lot to discuss and a lot to go through."

Hamilton, who says he wants to help further Mercedes' drive on environmental and racial diversity issues, suggested discussions will take place at the end of the year. The season ends with the Abu Dhabi GP on Dec. 13.

“At the moment I don't feel like I've finished," Hamilton said. "There's always areas to improve. I love racing, I love the challenge.”

When the first Turkish GP was held in 2005 it was won by a 25-year-old Kimi Raikkonen. He is still driving at the age of 41 and has shown of his old flair in recent races with the Alfa Romeo team.

Vettel's star has fallen and the four-time F1 champion has not even finished in the top five places for struggling Ferrari this season. In fact, sixth and seventh are the best performances in a dismal year for the driver once tipped to topple his idol Schumacher.

But he has not given up on turning his fortunes around next year, when he will join Aston Martin.

“In the bigger picture I'm still swimming, I'm happy to keep swimming despite the tide facing the opposite way,” Vettel said. “I'm pretty sure that there's something left for me and I'm looking forward to that.”