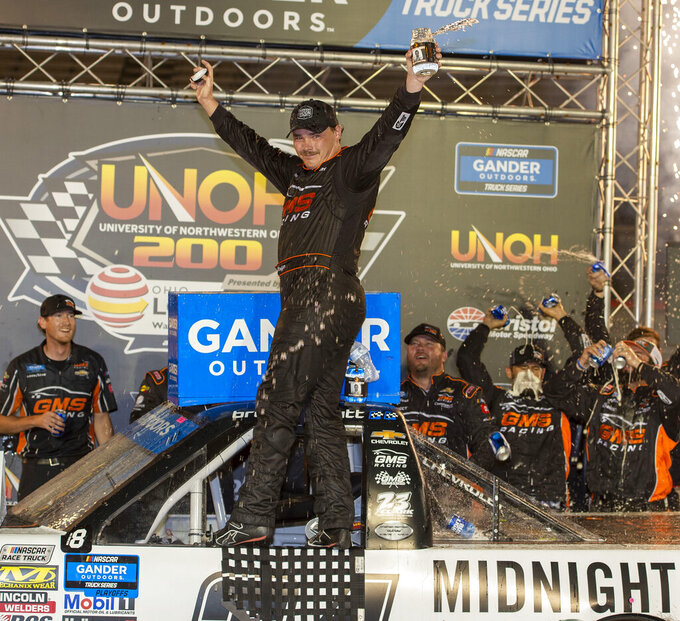 FILE - In this Aug. 15, 2019, file photo, Brett Moffitt celebrates in Victory Lane after winning the NASCAR Truck Series auto race at Bristol Motor Speedway in Bristol, Tenn. The NASCAR Truck Series has its championship race Friday, Nov. 15, 2019, at Homestead-Miami Speedway. Brett Moffitt, Matt Crafton and Stewart Friesen join Ross Chastain in the championship field. Moffitt is the defending series champion and will try to become the first repeat winner since Crafton in 2013 and 2014. (David Crigger/Bristol Herald Courier via AP, File)

HOMESTEAD, Fla. (AP) — Ross Chastain had the talent to compete for a NASCAR championship. The path he took to race for the Truck Series title reads almost as a work of fiction.

"I bet y’all didn't expect to see me here," Chastain said. "Man, this is crazy."

His year started with an FBI raid of his Xfinity Series sponsor that cost him his ride. Chastain had only weeks to put together a schedule over multiple NASCAR series. He had a win disqualified by NASCAR. Oh, and Chastain didn't even declare for the Truck championship until June. The eighth-generation Florida watermelon farmer started the ninth race of the Truck season with no points.

Chastain survived all the chaos, thrived down the stretch, smashed a few watermelons in victory lane and has arrived at Homestead ready to deliver a championship trophy to the family farm.

The 26-year-old Chastain had a tumultuous year. Chip Ganassi Racing shuttered its Xfinity Series team in January because of a sponsorship issue that arose after the FBI raided DC Solar's headquarters and the home of the company owner. That left Chastain out of work until he landed a ride in the No. 45 Chevrolet for Niece Motorsports. Chastain took a pit stop in the Cup Series and finished 10th in the Daytona 500. He started the season competing for the Xfinity title before he changed his mind in June and went after the Truck championship. The swap to race for the championship in NASCAR's third-tier national series has turned out to be the best decision — even with a bump in the road.

He was disqualified after a Truck win under NASCAR's zero tolerance policy on failing post-race inspection but rebounded to win at Gateway to crack the top 20 in points. He won at Pocono and soon secured a spot in the playoffs.

Chastain has five top-10 finishes in the last six races. He competed in 75 races across the three national series in all and earned a Xfinity Series win at Daytona in July for Kaulig Racing, the team he will race for full-time in 2020.

Chastain lost his voice after he clinched a title race berth at Phoenix but plans to cap a crazy year by winning it all at Homestead.

Crafton is back in the championship hunt, racing for the title a year after he missed the championship field for the first time since the elimination-style postseason was introduced to the Truck Series.

Crafton made it to the finale without a victory: He hasn't won since a July 2017 race at Eldora Speedway, a string of 57 races. No matter, the 43-year-old Crafton methodically delivered 17 top-10 finishes in 22 races and finished on the lead lap in all but one race. He drives the No. 45 Ford for ThorSport Racing and has an average finish of 9.1 this season.

Crafton is the only driver in Truck Series history to win consecutive championships (2013, 2014) but they were before the current format. He won his 2013 title simply by starting the race. He'll have to post the best finish among the four championship drivers to earn this year's championship.

"I've won a race at Homestead before, I've won a couple of championships there," Crafton said. "I know we can do what we need to do to win."

The 36-year-old Friesen won at Phoenix to earn the automatic berth in the championship field. He also won at Eldora driving the No. 52 Chevrolet for Halmar Friesen Racing. It could be his one shot at a title. Friesen hasn't ruled out making the jump to the Xfinity Series in 2020.

The former hockey player and current dirt track racer had a bit of a wild ride to the checkered flag at Phoenix. He started second behind the pole winner and was penalized for beating Austin Hill to the start line and was dropped to the rear of the field. Friesen got hot the rest of the race and has a championship in sight. Friesen has 12 top fives and 16 top 10s in just his second full season in the series. Friesen was eliminated after the opening round last year and finished fourth last season at Homestead.

Moffitt is back to defend his Truck Series championship, only with a new ride and new team. Moffitt was an underdog driver for an underfunded team when he pulled out the 2018 title for Hattori Racing, a tiny team stretched so thin financially there were times the organization wasn't sure it could complete the season. Even with a championship, the 27-year-old Moffitt was out at Hattori and landed at GMS Racing in the No. 24 Chevrolet.

He won four times on a variety of tracks — the 7/8-mile oval in Iowa, the 1.5-mile speedway in Chicago, the half-mile concrete short track of Bristol, and then the 2.459-mile, 10-turn road course at Canadian Tire Motorsport Park.

Moffitt won at Homestead last season to clinch the title and is trying to join Crafton as the only back-to-back champs in Truck history.