Elliott aiming to be among drivers always with shot to win 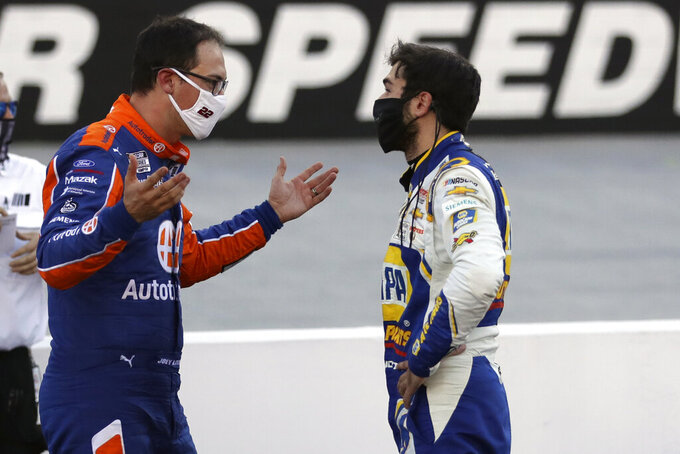 Chase Elliott has been tantalizingly close to winning NASCAR races so many times it’s hard for him not to be disappointed.

Sure, Elliott understands he can't win them all, but he has flirted with victory in four of the five Cup races since NASCAR resumed competition May 17 following a 10-week shutdown for the coronavirus pandemic.

His return has been a roller-coaster ride that saw him drive off with just one victory, a Thursday night race at Charlotte Motor Speedway last week, to break up the string of close calls.

“There’s a handful of drivers and teams who we know have a shot to win every single week,” Elliott said Tuesday in a Zoom call with reporters. “And there’s no reason why we can’t be among that group. That’s our goal and I think if you’re in that position enough, it’ll go your way plenty and you’ll get your fair share.”

Elliott's Hendrick Motorsports team expects to be in contention every race and believes that shouldn't change Sunday at Atlanta Motor Speedway.

He was pushing for the lead at Darlington Raceway when Kyle Busch wrecked him. He was about to win the Coca-Cola 600 until a caution with two laps remaining jumbled the finish. Elliott pitted from the lead, took four tires and couldn’t get back to the front in the two-lap overtime sprint. He did win a $100,000 bounty by beating Kyle Busch in a Truck Series race at Charlotte and followed it with a win in the Cup race.

The near-misses haven't shaken the confidence for Elliott or crew chief Alan Gustafson.

Elliott took the momentum from his Charlotte win to Bristol Motor Speedway on Sunday and was again in contention for a victory. But he and Joey Logano tangled on the track with just over a lap remaining that caused both to crash. Logano gave Elliott a long stare on pit road that lacked some of the drama with no fans on scene to react.

“I talked to Joey after the race face-to-face like it should be,” Elliott said..

Regardless of the missed opportunities or bad breaks, he's third in the Cup series standings with four top-five finishes through nine races. Elliott is keeping that fast start in perspective, but still feels like he can contend for a series championship.

“This is a 38-race season, and we have to keep that up to really be a contender," he said. I think we can do it, but until you go out there and achieve that it really doesn’t matter.”

It's been anything but a normal season so far amid the pandemic. Races have been held without fans and with condensed one-day schedules. Elliott likes the new itinerary, saying “over time we've over complicated weekend schedules and practiced entirely too much.

“I know a lot of that’s money driven, and I get it,” he said. “As our popularity grew over a period of time, tracks and things tried to get all they could get. I understand that, but I think a lot of us we’ve got to get back to our roots."

He's not alone in that sentiment. Brad Keselowski, winner of two of the races Elliott lost, said this schedule cuts costs and benefits the more experienced drivers.

Racing without fans, Elliott had the strange experience of climbing out of his car following the victory only to find nobody with whom to celebrate.

He gets the restlessness of fans who want to resume attending races.

“I think that NASCAR deserves some credit, and I think they’ve done a really good job to this point of getting back racing in a safe manner," Elliott said. “I think they’re just taking this next step cautiously. We’re back racing, we’re on TV. You can watch the race. Let’s not take too many steps forward and get a slap on the wrist for something that maybe we shouldn’t be doing right now.”