Column: Dillon out to bust brackets with fast playoffs start 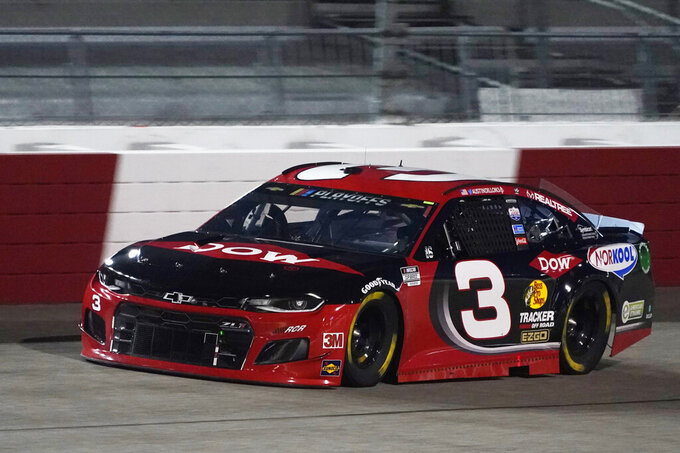 CHARLOTTE, N.C. (AP) — Austin Dillon was written off as a championship contender before NASCAR's playoffs even began and he knew no one expected him to go far. Undeterred, he vowed to show he has taken a huge step in his career.

Dillon raced his way into the playoffs with a win at Texas, just his third in seven full Cup Series seasons, and he has never been considered a threat for the title. A first-round elimination would surprise no one.

He still may not make it to the final four, but Dillon is making good on his promise to “mess up a lot of brackets.” He opened the postseason with finishes of second and fourth — the first back-to-back top-fives of his career — and should easily move into the second round.

NASCAR goes to Bristol Motor Speedway on Saturday for the first elimination race and William Byron, Cole Custer, Matt DiBenedetto and Ryan Blaney are all below the cutline. Dillon, ranked 10th at the start of the playoffs, has climbed to sixth in the standings.

“I think we’ve just steadily gotten our stuff better and we’ve got a really good group working hard,” Dillon said. “I’ve had confidence in myself my entire career. I've been through some ups and downs and kind of weathered the storm to this point. I always felt like when I’m given something to work with I can perform with it and and make it happen.”

The fast start is a surprise because it has been a long time since Richard Childress Racing has been able to keep up with the big boys in NASCAR. Mind you, RCR was once among NASCAR's elite, but the organization slipped to the second tier after Kevin Harvick left following the 2013 season.

RCR posted just three wins over six season; one was Dillon's victory in the 2018 Daytona 500, the same year the team downsized from three cars to two. Ryan Newman was replaced by rookie Daniel Hemric in 2019, and Hemrick was then replaced this season by Tyler Reddick, another first-year Cup driver.

Dillon, the grandson of team owner Childress, is expected to be the team leader. Now 30 and a new father, the responsibility suits him.

“My family’s doing well and it’s cool have a son at home I and feel like I’ve matured as a driver,” Dillon said. "I'm in that age zone where things start clicking a little bit, you know? You notice a bunch of these guys when they start getting a little older in age is when stuff starts coming to them really well?

“Some people do it faster than others, but it’s a good time right now for me and the (No.) 3 team.”

Dillon opened the playoffs as runner-up to Harvick at Darlington and then rebounded from a pit road speeding penalty at Richmond to finish fourth. He and Joey Logano are the only two drivers to open the playoffs with consecutive top-five finishes.

It's allowed Dillon to capitalize during a free fall by Blaney, a driver most expected to advance further than Dillon. Blaney was ranked second in the standings in July at Texas, where Dillon earned his playoff spot, but a slide that started the final two months of the regular season has him on the verge of elimination.

He was penalized in the opener when his car failed pre-race inspection and he finished 24th, then was 19th at Richmond. His collapse has been as surprising as Dillon's rise.

Blaney is last on the playoff grid, in a 27-point hole and determined to win this weekend to extend his postseason.

“We probably need to go out there and win Bristol,” Blaney said. “It’s our goal every week to win the race, but now it’s our season on the line.”

Dillon, on the other hand, is at ease headed to Bristol and already breaking down his chances in the second and third rounds. The second round includes Talladega, a superspeedway where RCR should be competitive, and the third round includes a return to Texas.

The biggest challenge will be keeping the No. 3 team steady at the same time everyone is finally noticing its potential.