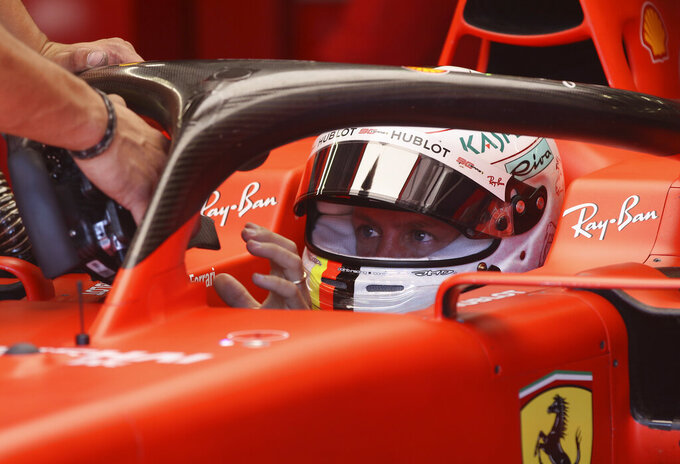 Ferrari driver Sebastian Vettel of Germany is handed the car's steering wheel in the team box during the first free practice session for the Austrian Formula One Grand Prix at the Red Bull Ring racetrack in Spielberg, southern Austria, Friday, June 28, 2019. The race will be held on Sunday. (AP Photo/Ronald Zak)

SPIELBERG, Austria (AP) — Valtteri Bottas and Max Verstappen both crashed and seriously damaged their cars during the second practice ahead of the Austrian Grand Prix as the high-altitude track in the Alps showed its perilous side on Friday.

Mercedes and Red Bull blamed gusty winds in the montane surroundings for the incidents, which caused the 90-minute session to be red-flagged twice.

A third big-name driver narrowly avoided a similar crash as Sebastian Vettel also spun off the track but his Ferrari came to a standstill just before the barriers, limiting damage to his tires only.

Before his crash, Bottas posted the second fastest time of the session, trailing Ferrari driver Charles Leclerc by 0.331 seconds.

Championship leader Lewis Hamilton, who led the first session in his Mercedes, had the fourth best time, 0.443 behind Leclerc.

Bottas slammed his Mercedes into the barriers after he lost control of the rear and spun off the track at Turn 6, leaving the front of his car heavily damaged.

The mishap came less than 15 minutes after Verstappen slid off the track backward in Turn 10, badly damaging the right rear of his Red Bull.

"Hard to say what happened, maybe it was the wind," Verstappen said. "It's still only Friday so we have time to repair everything for tomorrow."

Bottas and Verstappen are the last two winners of the race, in 2017 and 2018, respectively. Neither was hurt in the crashes.

"Suddenly you have three, four kph more and you are beyond the limit," Wolff said about the strong wind affecting the drivers.

Red Bull motorsport adviser Helmut Marko added that Verstappen "wasn't driving faster as before in that turn but the gust just swept away the rear."

The incidents made for probably the most eventful practice of the season, hours after Hamilton posted the fastest time in the first practice. The British five-time world champion led Vettel by 0.144 seconds, with Mercedes teammate Bottas 0.161 slower in third.

Bottas, who earned his first career podium on this track in 2014 and started the last two years from pole, had missed the first half hour as his power unit had to be replaced to fix an oil leak.

Leclerc and Verstappen were ranked fourth and fifth, respectively.

Practice was cut short after Niko Hulkenberg lost the left front wing of his Renault on the curb. Many racers, including Hamilton, damaged their front wing on the high edges of the track, called "yellow sausages" by many.

While the opening practice showed Mercedes' unbeaten streak might continue this weekend, an attempt from various teams to create a more level playing field failed earlier in the day.

At the center of the discussion was the new type of tires introduced by supplier Pirelli this season. They have a reduced tread gauge which should cut down on blistering.

While most teams have found them unpredictable and have struggled to adapt to them, the new tires seem to perfectly fit the strategy of Mercedes, which has won all eight races this season, including six 1-2 finishes.

To open up the battle for victories and make the races more appealing again, various teams, led by Red Bull, have been suggesting a midseason return to last year's rubber.

But in a meeting with all team principals, Pirelli, and governing body FIA, the proposal failed to get the mandatory support of at least seven of the 10 teams. Apart from Mercedes, the idea was also rejected by Williams, Racing Point, McLaren and Renault.

One of the reasons for the dismissal was the lack of data, as teams could only guess how the 2018 tires would work under the 2019 cars.

Hamilton initially had been critical of the new tires during preseason testing, but has meanwhile slammed the idea of switching back to the old ones.

"Last year you had to manage the tires to a temperature, which means you had to do more lifting and coasting. It was a lot worse," said Hamilton, who attended Friday's meeting. "That's an example again of different teams pushing for different things for their own personal goals rather than for the sport's."

Tire management will become a key factor during Sunday's race with temperatures expected to rise up to 33 degrees Celsius (91 F) in thin air.