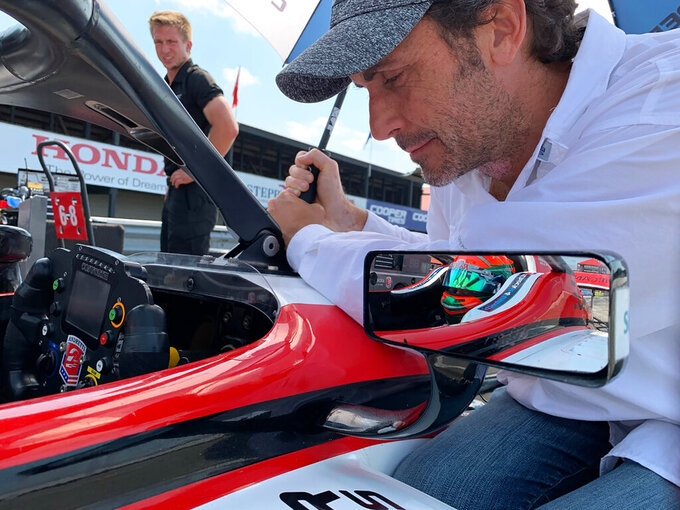 Former IndyCar and NASCAR driver Michel Jourdain Jr. speaks with Salvador de Alba Jr., of Guadalajara, shown in mirror, during Indy Lights testing at the Mid-Ohio Sports Car Course in Lexington, Ohio. Just driving the Lights car for Andretti would have been enough to call his trip to Ohio a success. But de Alba had a fully immersive experience that went beyond his wildest dreams. (AP Photo/Jenna Fryer) 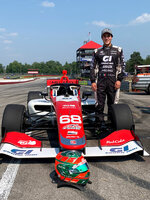 His journey started this week at Mid-Ohio Sports Car Course, where de Alba tested an Indy Lights car for Andretti Autosport. He had never before been in an Indy car and estimated he ran “at least 6,000 laps” around the 2.258-mile road course online on iRacing to prepare.

Just driving the Lights car for Andretti would have been enough to call his trip to Ohio a success. But de Alba had a fully immersive experience that went beyond his wildest dreams. The 21-year-old got tips ahead of the test from fellow Mexican driver O'Ward, watched his first live IndyCar race and then traveled to Indianapolis to visit the Andretti shop and take a private tour of Indianapolis Motor Speedway.

“It was better than going to Disney,” de Alba told The Associated Press. “Everything was new for me, it was my first experience with an IndyCar race weekend. It was ‘Wow’ for me to meet all the drivers. Then to race that cool of a car, visit a shop and see Indianapolis Motor Speedway — I think I had a very complete experience."

De Alba was accompanied by his father and Michel Jourdain Jr., who raced nine seasons in CART and won a pair of races and finished third in the 2003 series standings. Jourdain has twice raced in the Indianapolis 500, dabbled in NASCAR's Xfinity and Truck Series, and is still active today in Mexico in the Super Copa Championship.

Jourdain won the Super Copa title last season but for 2021 aligned with Michael Andretti to form Andretti Jourdain Autosport for that series. Jourdain is determined to help young Mexican drivers advance, an initiative backed by Andretti, and after racing against de Alba the past five years he highlighted the second-generation racer from Guadalajara as a budding prospect.

De Alba is the current points leader in both NASCAR Peak Mexico and Super Copa, series that both use full-bodied cars. He holds a five point advantage over three-time NASCAR Mexico series champion Ruben Garcia, who has three career Xfinity Series starts, headed into this weekend's race in Puebla.

“One of the main goals of the Andretti Jourdain partnership is to bring young Mexican and Latin drivers into the IndyCar world,” Jourdain told AP. “That includes crew members and finding ways to expand racing talent outside of Mexico.”

The Mexican market is hot right now with Perez in his first season driving for Red Bull in Formula One, 22-year-old O'Ward in the thick of IndyCar's championship race and Suarez a key building block of Trackhouse Racing in NASCAR. Justin Marks, owner of Trackhouse, has partnered with entertainer Pitbull on the team and along with Suarez is building a program designed to tap into the lucrative U.S. Latin market.

Perez and Suarez both have financial backing from Mexican companies and now de Alba wants to capitalize on the moment his fellow countrymen are enjoying: Canelo Alvarez is the unified super middleweight world champion, Brandon Moreno is the first Mexican to win a UFC championship, Karina Rodriguez is the first Mexican to win an Invicta MMA title and Andrea Meza was crowned 2021 Miss Universe in May.

“I feel very proud to be part of the group that is getting recognized,” O'Ward said recently. “I think it’s been great that we’ve seen very different athletes doing really well in their certain sport, whether it is UFC, boxing, Checo in Formula One, me in IndyCar, the lady that won the Miss Universe, it's really cool.”

De Alba already has some backing from three companies that helped him get his test with Andretti. He has returned to Mexico to talk with primary backers Grupo Indi, Mecano and Sidral AGA/Red Cola about his next moves.

He said he wants to join the Road to Indy system, the feeder program that Andretti heavily invests in to develop future IndyCar drivers. It will take financial backing from his own sponsors for de Alba to make it to the U.S., but Jourdain believes the success of Perez, O'Ward and Suarez have reignited an interest in Mexican racers.

The last Mexican driver to win an IndyCar race was Adrian Fernandez at California in 2004.

“It's a lot cheaper to race in Mexico and you have very, very good drivers and I think if you are competitive in Mexico, I believe you can be competitive in the U.S.,” Jourdain said. “It is a good moment for Mexico and there are opportunities right now for Mexican companies to support young talents internationally.”

After six days immersed in IndyCar, de Alba is certain he wants to find his way into a U.S.-based series. He sometimes sees Perez at local karting tracks and the F1 star is always willing to help young racers, and he knows both O'Ward and Suarez.

His time was so fulfilling that de Alba's mother complained he wasn't calling home with updates.

“I was like ‘Hey, Mom, I have lots of things to process and when I come back I will tell you everything,’” de Alba said. “It was a dream, and it gives me all the motivation to come back and do more, to do more tests, run races and race here in the United States.”