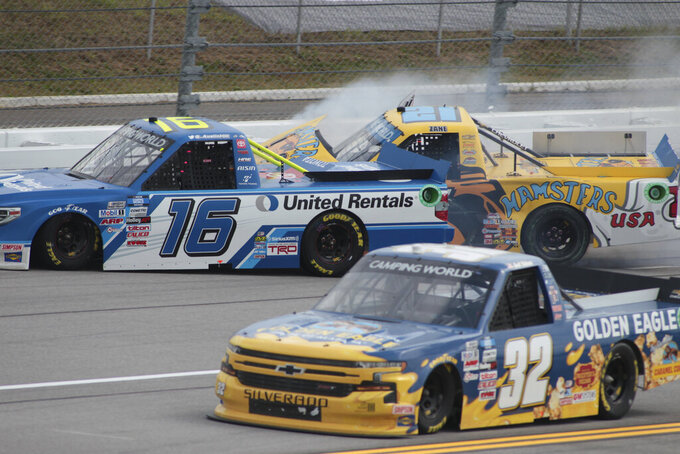 CHARLOTTE, N.C. (AP) — Tensions are high at every level of NASCAR as its grueling, 11-month season enters the homestretch with three weeks remaining to crown three series champions.

All eyes had been on feuding drivers Chase Elliott and Kevin Harvick, but NASCAR last week demanded the they knock it off — a directive that sucked all the drama out of what could have been a nail-biting rivalry capable of derailing Elliott's shot at a second consecutive Cup Series title.

Still, there's been enough bumping and banging through the field in all three series that “driver code” and “etiquette” hang heavy over the championship races.

Should non-playoff drivers literally move out of the way of title contenders? Are drivers taking too many risks trying to make it to the championship round? Both are viable questions based on the racing of late.

Denny Hamlin and Chase Briscoe have twice tangled on tracks this season and last Sunday's contact in Texas led to a heated back and forth between the two on Instagram.

Tyler Reddick apologized to William Byron earlier this month at Charlotte, where they had an on-track incident and Byron was ultimately eliminated from the playoffs. Byron admitted he was “at a full rage” and Reddick assured him he understood the stakes for Byron that day.

“I did not see it that way, I saw him hit the apron and turn right,” Busch said. “It's pathetic what we're doing these days. Nobody has any self-respect, respect for equipment, nothing. Cup (drivers) are guilty of it, too.”

How does that get fixed?

“Unlearn everything you've learned about safety and get people hurt,” said Busch, who said “there's no question” the problem is generational and younger drivers drive as if they are invincible.

“I wouldn't say I'm scared but it's like you're kind of leery going into all these (superspeedway) races, just being able to walk out afterwards,” added Busch, who broke both his legs in a 2015 crash at Daytona.

Hamlin, his teammate at Joe Gibbs Racing, has basically had enough and made that clear in his testy online exchange with Briscoe. Hamlin scolded Briscoe for racing championship contenders too hard, to which Briscoe replied: “I get paid to race, just because you guys are racing in the playoffs doesn’t mean I’m just gonna wave you by.”

“Risk management is how you optimize your finish each week,” he wrote. “Maybe putting yourself in others shoes for 1 min would help. You had 25 races to get a chance to race for the post season. Respect is a underrated trait in today’s world it appears.”

Now both the Xfinity and Cup series head to Kansas Speedway this weekend for the middle race of the third round of the playoffs and the stakes couldn't be higher. Kyle Larson is the only driver in all three series with a spot locked up in the title-deciding finale. All four slots in the Xfinity championship are still open, same for the Truck Series, which doesn't race until next week at Martinsville Speedway.

Hamlin isn't expecting much on-track courtesy from drivers who are out the title chase.

“I think we have seen in our sport that there is no code,” Hamlin said. “I just don’t understand the mentality of some of these guys.”

Elliott, who goes to Kansas below the cutline, believes NASCAR's playoff format “certainly extracts some desperation at times.”

His own spat with Harvick quietly began in September at Darlington, where Elliott said Harvick gave him a flat tire. When it happened again two weeks later at Bristol, Elliott deliberately held Harvick up to cost him the win. Then Harvick intentionally wrecked Elliott at Charlotte, only to wreck himself out of the playoffs later in the same race when he crashed into a wall as Elliott closed in.

Elliott noted drivers have to be aggressive to advance through the playoffs, but also said personal feelings come into play.

“When two drivers mutually respect one another, I feel like you get along and you race each other with respect, and if you have a run-in, typically you have a conversation about it and go on down the road," Elliott said Thursday. "When there might be a lack of respect, or people don't see eye-to-eye, that to me is probably where your problems come from more so than the quote-unquote code.

“It's just more of a respect thing and understanding where the other person's coming from.”