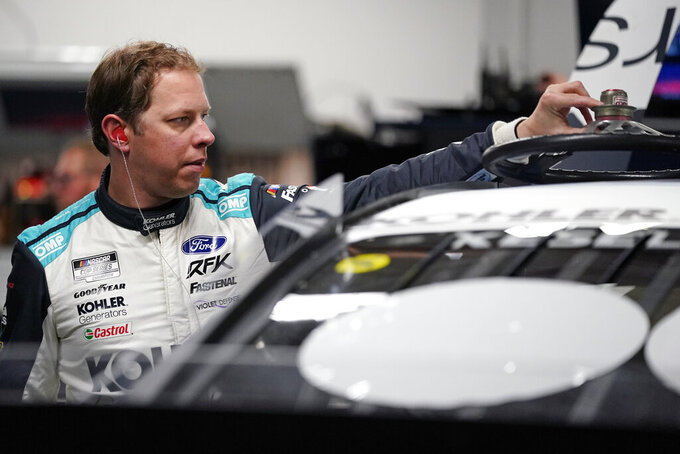 The Duel at Daytona scheduled for Thursday night — a qualifying event that splits 42 cars into two races and sets much of the starting grid for the season-opening Daytona 500 — could be a watered-down version because of a parts shortage involving the new Next Gen car. The scarcity has left teams with a limited number of backup cars and even fewer on site.

Jones is hardly alone in his concern. Drivers and teams for months have lamented a lack of inventory heading into stock car racing’s premier event.

“It is a tough thing,” Blaney said. “Our inventory is not very big currently; no one’s is. … We used to come down here with one or two backup cars for each (driver) just in case things happen. Now we’re sitting on a couple for your whole organization. That’s been difficult, and you have to have that in the back of your head.”

Blaney said he was driving in a practice session Tuesday and thinking, “How hard do I push my teammate to kind of see what my car will do and what his car will do without possibly wrecking him?”

He expects a similar approach in the Duel.

“I think guys are going to be pretty smart on kind of how they race; you’d hope so because everyone’s kind of sitting in the same boat,” Blaney said. “You have to be aware and observant. But you don’t ever want to wreck your 500 car, let alone when we don’t have many things to spare.”

Two of them will get in during single-lap qualifying runs Wednesday night. That leaves four drivers vying for the final two spots in those qualifying races — and dozens of others trying to keep their cars mostly in one piece.

“I think we’re going to be timid for sure,” Jones said. “There is going to be some point where we have to race in a Duel, learn about the car and go from there. But it’s going to be an eyes-wide-open-type deal. If anything starts really getting kind of dicey or out of hand, we’re going to have to be extra cautious on that side of things.”

NASCAR's latest iteration of its stock car is essentially a kit car. Every team buys most of the same parts from the same vendors and then has instructions on how to put them together. Body panels and suspension pieces have been the most sparse, creating angst for teams.

The ultimate goal: the wholesale changes are expected to result in a more durable and economical car, one that could tighten the playing field, at least to some extent.

The Next Gen car debuted at the exhibition Clash two weeks ago at the Los Angeles Memorial Coliseum. But that was a short track that included slower speeds and little, if any, drafting. Daytona will be considerably different, especially since teams have been reluctant to do much bumper-to-bumper drafting in practice and test sessions.

At least one driver expects to take the same approach in the Duel as he would in the 500.

“I’m planning to race,” said Logano, the 2015 Daytona 500 winner and 2018 Cup Series champion. “I think as soon as you get scared of crashing and those types of things, you’re never going to win. I’m going to go race. If we crash, so be it, we’ll figure it out.”