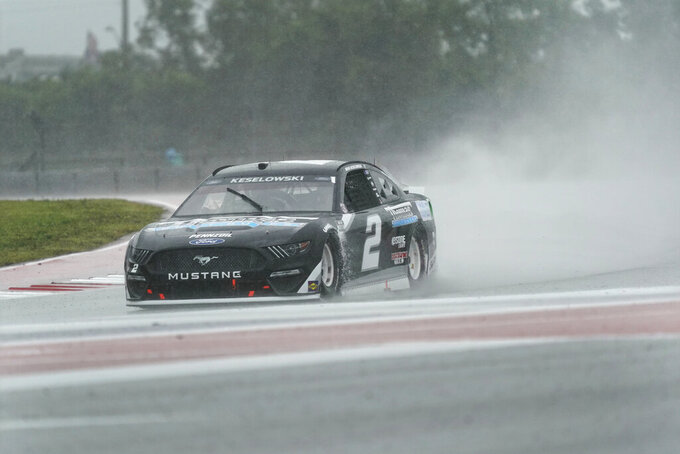 Brad Keselowski (2) drives out of Turn 18 during practice for Sunday's NASCAR Cup Series auto race at the Circuit of the Americas in Austin, Texas, Saturday, May 22, 2021. (AP Photo/Chuck Burton)

AUSTIN, Texas (AP) — NASCAR is set to race the Circuit of the Americas for the first time and all eyes are on both Chase Elliott and an unsettling weather forecast of rain that could make the inaugural Texas Grand Prix a wild one.

Elliott, NASCAR's defending champion and most popular driver, will start Sunday as the favorite given his career mastery of road courses. And he needs a win. NASCAR's season of parity has so far produced 10 winners through 13 races but none from Elliott.

Elliott's been close with five top-five finishes and he was runner-up at the Daytona 500 and at Martinsville. He led a race-high 44 laps on the road course at Daytona but a late yellow flag ruined his chance at victory.

It may not be time to worry about Elliott's season, but his Hendrick Motorsports teammates have all been to victory lane this year. Kyle Larson and William Byron have one win each, while Alex Bowman's victory last week was his second of the season.

"I'm not one to guarantee things in my life," Elliott said when asked this week if he'd expected to win by now. “We all want to win as a team. I want to win as much as anyone else. But we haven't and that's really the bottom line.”

In normal conditions, Elliott should feel as comfortable as anyone on a new track. His five career road course wins are the most among active drivers and he's won four of the last five outings on road tracks.

If he wins a sixth race on a road course, Elliott would be just the seventh driver in history to reach that mark, tying him with Bobby Allison, Richard Petty, Rusty Wallace and Ricky Rudd.

But the dark cloud looming over Sunday is the likelihood of rain, which National Weather Service forecasts at better than 50%. The drivers slipped and slid their way through Saturday morning's windy and wet practice session that may have been fun for some, but likely left none of them feeling comfortable about the race.

For some, it was their first laps around a track that was built for Formula One.

“It was a blast,” said Byron, who was fastest in the session. “I hope it rains. For the fans, I think it would be awesome if if rains.”

Joey Logano was second in practice, ahead of Kyle Larson and Kyle Busch. Busch and Martin Truex Jr. each have four road course victories.

Elliott, who was fifth in practice, admitted this week he doesn't think he's very good racing in wet conditions.

“The rain tire is certainly a bit of a question mark and it's not one I'm very good at,” Elliott said bet. "Especially coming to a new track. (Rain) completely changes everything about the course and what you do.

“For guys who race in the rain enough, they can make that transition. I just haven't done it enough to feel real confident. What to change, where to change it, how to change it, braking zone changes ... There's really not a good way to prepare for that.”

Byron and Logano said the visibility was next to zero on the track's two high-speed straights because of the rooster tail of spray spit out by the cars ahead. That could be a factor if there's more rain Sunday.

Actor Matthew McConaughey will be the Grand Marshal for Sunday's race. It's his second time in the role and the first since he gave the start command at the Daytona 500 in 2005. McConaughey is part of the ownership group of the expansion Austin FC in Major League Soccer. McConaughey's name has also surfaced as a possible candidate for Texas governor in 2022.

Elliot is a 5-2 favorite to snag his first win of the season in the season's first race in Texas, according to FanDuel Sportsbook.... NASCAR will be back in the state for the All-Star race weekend in June at Texas Motor Speedway in Fort Worth... Chris Buescher is the only Texas native who is a full-time Cup Series driver. He hails from Prosper, which is near Dallas... Byron has finished in the top 10 in 11 consecutive races, which ties him with Logano (2015) for the third-longest top-10 streak among active drivers... Elliott isn't the only top-flight driver trying to find a break-through win this season. Kevin Harvick who had nine wins a year ago, and Denny Hamlin, who had seven, are both chasing their first victory of 2021.