IndyCar to showcase series with docudrama on The CW Network 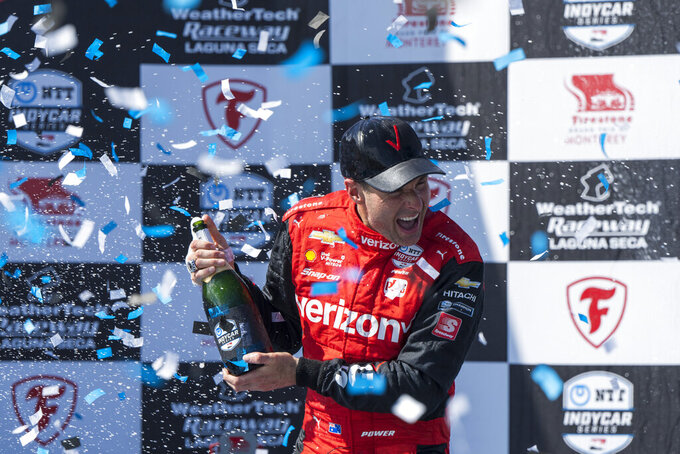 FILE - Team Penske driver Will Power, of Australia, celebrates after winning third place in the IndyCar season finale auto race at Laguna Seca Raceway on Sept. 11, 2022, Monterey, Calif. IndyCar has landed its own “Drive to Survive” type docudrama that will showcase the buildup to next year's Indianapolis 500. The six-part “100 Days to Indy” will air on The CW Network next spring and chronicle the 100-day window ahead of the “Greatest Spectacle in Racing” on May 28, 2023 at Indianapolis Motor Speedway. (AP Photo/Nic Coury, File)

IndyCar has landed its own “Drive to Survive” type docudrama that will showcase the buildup to next year's Indianapolis 500.

The six-part “100 Days to Indy” will air on The CW Network next spring and chronicle the 100-day window ahead of the “Greatest Spectacle in Racing” on May 28 at Indianapolis Motor Speedway. Filming will begin with the IndyCar season opener through the checkered flag at the Indy 500.

“The Indy 500 is the most unique, exhilarating and engaging event on the planet,” said Mark Miles, president and CEO of Penske Entertainment. “It’s an unrivaled spectacle fueled by ambitious, fearless and captivating personalities. This series will give viewers an unprecedented front row seat as the racing season begins and the countdown to Indy accelerates."

The docuseries will be directed by Patrick Dimon, who won an Emmy for outstanding camera work about a champion surfer on HBO's “24/7: Kelly Slater." Bryan Terry, vice president of development for VICE TV, will be executive producer.

Each episode will debut on the CW with a fast re-air on VICE TV. The programming will be the first sports project since Nexstar Media Group, Inc. acquired 75% of The CW, which is considered fifth among the major broadcast networks in the United States.

IndyCar had been seeking a partner to take viewers behind the scenes of the American open wheel racing series for the last few years. Formula One has seen an explosion of North American interest through the Netflix docudrama “Drive to Survive."

The Netflix series sparked massive interest in F1 that has grown the fanbase — there will be three races in the U.S. next season, up from one — and drove new North American sponsors to multiple teams.

IndyCar has tried to play catch-up because it believes its personalities and drama are worthy of being chronicled. Just last season, McLaren Racing poached two top drivers and was embroiled in a messy negotiation with Chip Ganassi Racing for 2021 champion Alex Palou that was decided in mediation, and Andretti Autosport had a public meltdown over in-house tension between its drivers.

The championship was a five-driver fight to the season finale won by Will Power, and former F1 driver Marcus Ericsson won the Indy 500. IndyCar features three drivers who have raced in F1, and next year will have three drivers on the grid that left F2 for IndyCar. Palou, meanwhile, has been named a McLaren reserve driver for next season.

IndyCar was pleased to finally complete a deal for a docudrama that will air on The CW, which Miles praised for its ability to showcase the racing series to a newer, youthful audience.

“‘100 Days to Indy’ is a high-octane adventure grounded in emotional sports storytelling,” said Brad Schwartz, president of entertainment at The CW Network. “We have come together to deliver a series that will follow these champions of the racetrack and keep viewers on the edge of their seats.”