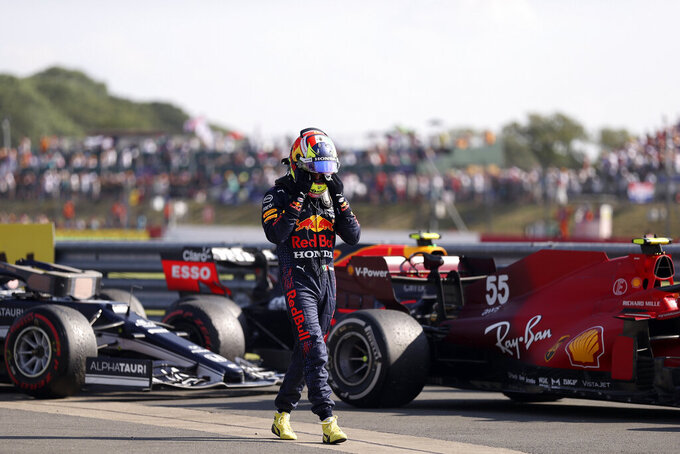 Red Bull driver Sergio Perez of Mexico walks away from his car at the end of the British Formula One Grand Prix, at the Silverstone circuit, in Silverstone, England, Sunday, July 18, 2021. (Lars Baron/Pool photo via AP) 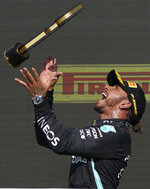 PARIS (AP) — Red Bull team principal Christian Horner is still angry at the crash which knocked Formula One leader Max Verstappen out of the British Grand Prix last weekend, allowing winner Lewis Hamilton to close the gap at the top of the drivers’ championship to eight points.

Hamilton won at Silverstone despite taking a 10-second time penalty after he was judged to have been responsible for Verstappen’s crash on Lap 1 at the high-speed Copse corner.

“We felt at the time, and still feel, that Hamilton was given a light penalty,” Horner wrote in his Red Bull column on Friday night. “We are reviewing all data and have the right to request a review. We are therefore still looking at the evidence and considering all our sporting options ... That crash has cost us approximately $1.8 million.”

Hamilton’s victory was his 99th in F1 but first in two months, and the seven-time F1 champion risked slipping even further behind Verstappen. His win prompted evident relief, but Horner felt the elation was too much.

“I am also still disappointed about the level of celebrations enjoyed in the wake of the accident. The Mercedes team were aware of the gravity of the crash with Max widely reported as having been hospitalized,” Horner said. “It is unimaginable not to inform your driver of the situation, moreover, to protect your driver in case they do not show the necessary restraint in celebrating.”

Hamilton was almost alongside Verstappen when the Mercedes clipped the Red Bull’s rear wheel, sending Verstappen into a tire wall at 51G. He was discharged from the hospital on Sunday night and went home to Monaco.

“I spoke to him again on Monday morning and he felt like he’d done a few rounds with (world heavyweight boxing champion) Tyson Fury,” Horner said.

Horner says Hamilton was reckless under pressure after losing pole position and trailing Verstappen by 33 points heading into the race.

“This was a moment of extreme pressure for Hamilton in the championship, becoming the hunter as opposed to the hunted, and in front of his home crowd,” Horner said. “We all know that these situations can bring out a different driving style and one that is not characteristic of a world champion.”

“It was brought to my attention through the TV broadcast that Toto was going to see the stewards with information he had tried to email to (FIA race director) Michael (Masi) before they had ruled on a penalty," Horner said. "It is a little bit like trying to lobby a jury while they make their final verdict.”

Verstappen entirely blamed Hamilton, who said he did nothing wrong.

“I don’t think I am in a position to have to apologize for anything. We are out there racing,” he said after the race. “I don’t agree with the stewards, but I take my penalty on the chin.”

But his reference to Verstappen’s aggressive racing style, a label the Dutchman has carried since he burst onto the scene, irked Horner.

“The narrative that Max was being ‘overly aggressive’ at that stage was unjustified. You only have to look at the fact Max has zero penalty points on his license and has not been found guilty of any on-track misjudgments in recent years,” Horner argued. “The aggressive 17-year-old F1 rookie Max Verstappen that Hamilton is referring to is not the Max Verstappen of today.”

Horner suggested there are some sour grapes from Hamilton, who is chasing a record eighth F1 title to move one ahead of Michael Schumacher.

“The reality is that Hamilton has met his match,” Horner said. “I agree that both drivers need to show each other respect, but Hamilton was the aggressor on Sunday.”

The drivers meet again next Sunday in the Hungarian GP, the last race before a summer break which could take some heat off their fiery rivalry.