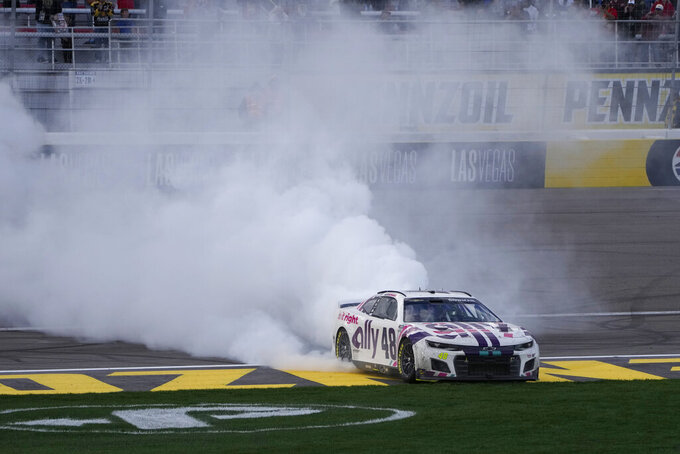 LAS VEGAS (AP) — The racing rule is quite clear at Hendrick Motorsports, where the boss will let his drivers go door-to-door so long as they don't tear up his cars.

After two of his stars tangled last week in California, Hendrick gave his team a rules refresher.

Alex Bowman and Larson went wheel-to-wheel Sunday in a two-lap overtime shootout at Las Vegas Motor Speedway. The racing was clean from the restart to the checkered flag and Bowman bested the reigning NASCAR champion for his first win of the season.

The win made it two straight for Hendrick through three Cup races. The winningest owner in NASCAR now has 281 victories.

Bowman took pride in scoring a seventh career victory with a clean 1-2 finish for Hendrick following the meeting with the boss.

“The talk was a big wakeup call," Bowman said. “When Mr. H calls a meeting like that, it gets your attention.”

Hendrick called the meeting after Larson and Chase Elliott collided racing for the lead at California. Larson said he didn't see Elliott when he squeezed him into the wall and apologized. Elliott was furious, and Hendrick put the matter to rest.

Just a week later, though, the Hendrick cars again had to race one another for the win and make sure to do it without any bumping or banging. The Hendrick chance came when a spin by Erik Jones with three laps remaining brought out the 12th caution of the race and shifted the fight from a pair of Joe Gibbs Racing cars to the Hendrick cars.

Las Vegas native Kyle Busch and teammate Martin Truex Jr. had been in a lap-by-lap chess match for the win until Jones' crash. Busch thought he'd inched ahead of Truex and had the win locked up until the caution.

The Hendrick trio of Bowman, Larson and William Byron all changed just two tires to get off pit road first through third. Busch, who had gone to the pits as the leader, took four tires and came off pit road in fourth.

Larson, the defending Las Vegas winner and winner last week in California, chose the outside line for the restart with Bowman on his inside. The two were in a drag race over the final two laps and Bowman only got significant as he closed in on the checkered flag.

Bowman, who led three times for 16 laps, beat Larson to the finish line by 0.178 seconds.

“Kyle and I historically have always raced each other really clean and this was no different," Bowman said.

Ross Chastain finished third for TrackHouse Racing and a podium sweep for Chevrolet. Chastain, who had led just 75 laps over 117 previous starts, led a race-high 83 laps.

Busch finished fourth in a backup Toyota after crashing in Saturday morning practice when his tire went flat. The wreck destroyed his car and because backups are in short supply at the start of NASCAR's rollout of the Next Gen model, the only option JGR had was a “parts car” not meant for competition.

“True testament to everybody at Joe Gibbs Racing," said Busch after the crews from all four teams helped prepare his car. “Everybody had a hand in being able to make us go."

Byron was fifth to give Hendrick three drivers in the top five and Aric Almirola was sixth and the highest-finishing Ford. Almirola is the only driver to finish inside the top-10 through NASCAR's first three races of the season.

But a sponsorship collapse dealt him a major setback and it took Chastain three years to make it to the Cup Series. He got one season with Ganassi before Ganassi sold the organization to TrackHouse Racing, which retained Chastain.

Through three races, the new arrangement suits Chastain rather well.

“It's a dream come true. This is what all the work is for,” Chastain said after finishing third. "This is why we train, done our whole lives and careers, once we realize we can race at this level is to have race cars like that. Couldn’t be more proud of TrackHouse.

Richard Childress Racing and Hendrick Motorsports both raised awareness for supporting Ukraine during its invasion by Russia.

Richard Childress responded to Ukrainian President Volodymyr Zelenskyy's plea, “I don’t need a ride, I need more ammunition,” by donating one million rounds of ammunition to the country.

Childress is on the board of directors for AMMO, Inc., and worked with the company to secure the donation. He was working with a private company to arrange its delivery.

Rick Hendrick and sponsor Hendrick Automotive Group pledged $200,000 to Samaritan’s Purse to support disaster assistance in Ukraine. Hendrick also promised an additional $2,000 for every lap led by one of his drivers and they combined for 51 laps, or an additional $102,000.

UP NEXT: The Cup Series next goes to Phoenix Raceway, where Truex is the defending race winner. Larson won in November to win his first Cup title.