Wolff shrugs off crashes as a sign Mercedes is quick again 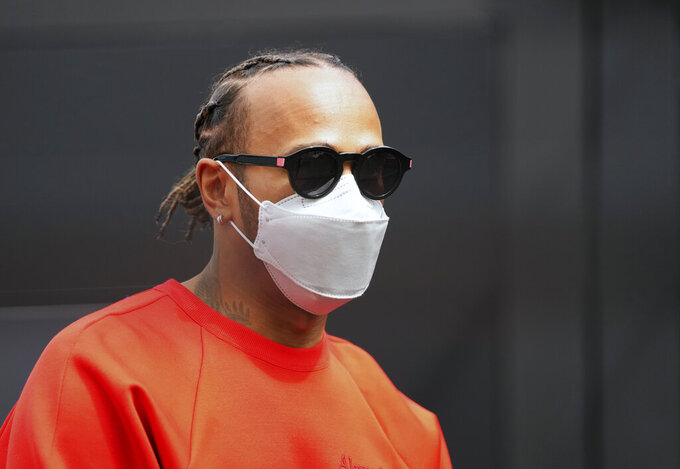 He even joked they were like synchronized swimmers for crashing almost simultaneously in Friday's dramatic ending to sprint qualifying.

“It’s very rare that you see both drivers crashing out, and especially the circumstances. They looked like, I don’t know how you call it in English, synchron swimmers? So that was a good choreography," Wolff said Saturday ahead of the sprint race where Russell starts from fourth place on the grid and Hamilton goes from ninth.

Hamilton is a record-equaling seven-time F1 champion with a record 103 wins and pole positions, but he has not won or taken pole since the penultimate race of last season. He came to Austria with back-to-back podiums and confidence that he was inching closer to a first victory this year.

Then he misjudged a turn and slid off on Turn 8 and into the crash barriers. When the session restarted, another red flag came out when Russell lost the car's rear into Turn 10 and crashed.

Wolff looked at the speed of a newly “competitive car” rather than the outcome.

“The last few corners that Lewis attacked were the fastest overall. Would we have fought for pole position? I'm not sure but we would have been maybe within a 10th (of a second) of the frontrunners," he said. "So that's improvement, and I'd rather have two cars in the wall fighting for pole than a car that is P8 (in eighth place) and drives Steady Eddie.”

Mercedes has struggled to adapt to the new F1 rules and “ground effect” — where the floor generates aerodynamic grip and causes bouncing. That has improved recently and Wolff is confident extra speed has been unlocked.

“Now that we can actually fight for front positions, I’m really happy to see that they attack. The corner before (he) crashed, Lewis was carrying 10K (kilos) more speed," Wolff said. “George, you saw he was up on his delta time. I think the summary is that the car is tricky to drive, but it’s faster now and for me that’s absolutely OK.”

With teams under pressure to work within a cost cap of $140 million — raised by 3.1 percent on Friday to cope with inflation and freight costs — the damage to both cars was widespread and expensive.

Mercedes swapped the chassis on Hamilton's car and both car gearboxes were changed, while the car floors and wings were either repaired or swapped.

"It looked like somebody dropped a lego car on the floor," Wolff said. ”I hope we have a good car for the sprint race to put us in a good position for tomorrow (Sunday's race).”

Austria is the second race this season featuring a sprint race, following the Emilia-Romagna GP in April, and the winner later Saturday collects eight extra points.

Last Sunday, Hamilton was contending for victory at Silverstone until a late safety car. Ferrari's Carlos Sainz Jr. got his first victory in F1. During the race weekend, Red Bull driver Max Verstappen and his team principal Christian Horner were booed by the British crowd at Silverstone, a consequence of the intense rivalry between Hamilton and Verstappen carrying over from last year.

On Friday, fans in the largely pro-Verstappen crowd at the Red Bull Ring in Spielberg loudly cheered Hamilton's crash.

Wolff was asked which was worse. He answered that fans at Silverstone and those who cheered Hamilton's Spielberg crash were wrong.

“Both are not very sportsmanlike. A driver that crashes out and ends up in the barrier, if that is being applauded you should question the attitude. The booing is a personal attack on the driver," he said. "I don't think that's right for the driver. That Christian was being booed at Silverstone, I don't think that's right, either. We love the fans, we want them to be there, we want them to be emotional and passionate. But when it gets personal that shouldn't happen.”