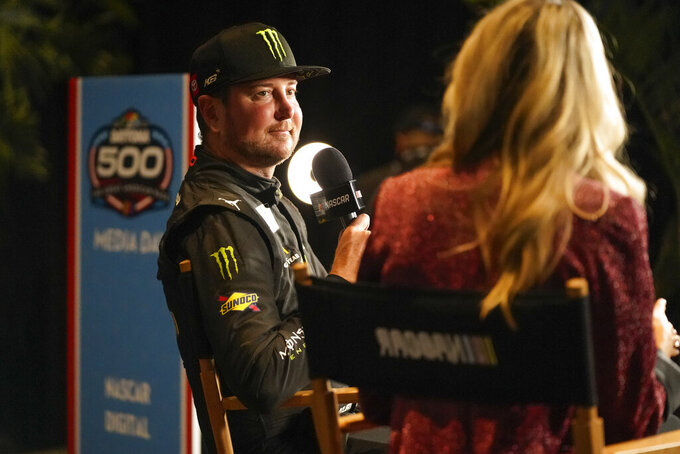 DAYTONA BEACH, Fla. (AP) — Kurt Busch first met Michael Jordan in a board room last summer as the free-agent driver weighed his racing options. Busch was star-struck in an “awesome moment” when the 6-foot-6 NBA Hall of Famer stood and shook hands with his future 23XI Racing employee.

The basketball great already had Bubba Wallace in the fold. Now Jordan made the recruiting pitch for the and-1.

“It was within 2 minutes he says, ‘We will win together,’” Busch said. “Man, it’s the easiest conversation I’ve ever had with a team owner to know that we’re on the same page on Day 1.”

Busch feels bullish on his prospects of helping Jordan celebrate a championship at 23X1 Racing he’s failed to win in other ventures outside of his six rings playing for Chicago. The results surely need a jolt as Busch, the 22-year veteran, joins Wallace for the second season of the team backed by Jordan and three-time Daytona 500 champion Denny Hamlin.

Outside the track, 23XI emerged as an outlier from even the well-funded powerhouse teams in NASCAR.

Want sponsors, the lifeblood of the industry? Busch and Wallace’s firesuits are branded this season with corporate heavyweights DoorDash, the Jordan Brand, Monster Energy, Dr. Pepper and McDonald’s. McDonald’s and 23XI even collaborated on a streetwear line set to drop this week (yes, Hamlin predicted McDonald’s gear would be “eaten up” pretty quickly). Media hype? Netflix filmed a docuseries chronicling Wallace’s rise through the ranks. Diversity? Wallace is the only Black driver in the Cup Series and the first one to lead a lap in the Daytona 500.

“I talk about building a powerful brand that happens to be a race team,” 23XI President Steve Lauletta said. “Not a race team brand.”

Wallace lost rides early in his NASCAR career because sponsorship dried up. But his social justice causes -- he led the call to ban the Confederate flag in 2020 — and Jordan's connections have money flowing to the point where the team rejected potential sponsors.

They won't turn away new fans.

Former crew chief Mike Wheeler, now 23XI director of competition, said his “eyes have been opened up” as he’s watched more diverse crowds grow inside the track — and around the hauler. Wheeler often meets fans attending their first race, in part because of Wallace's raised profile as race winner, social activist and popular pitchman.

As 23XI expands, Wheeler said there’s a commitment toward hiring outside the traditional NASCAR applicant pool.

“We’ve hired multiple people that have never been involved in racing because of their great attitude and the great outlook of what they can bring to the team,” Wheeler added.

Can they help Wallace and Busch go fast, starting Sunday in the Daytona 500?

Hamlin partnered with Jordan to build a team around Wallace, with modest expectations. The hype that enveloped Wallace at times obscured the fact that his season was no better than his years driving for underfunded Richard Petty Motorsports. While his first Cup win at Talladega last season marked one of the more culturally significant moments in NASCAR history, he had only two other top-10 finishes and missed the playoffs, 21st in the standings.

“We want to smooth out the graph on the results chart,” Wallace said.

If Jordan wanted to mold his race team in the image of his old Bulls dynasty, then bringing in a veteran with a one-time Bad Boy image like Busch could shake them into contenders. Busch won the 2004 championship, the 2017 Daytona 500, has 33 career wins — including at least one in eight straight seasons — and is a fixture in the playoffs.

“Everything we’ve asked him to do, he’s done, and he’s done it with the experience that he brings to the table,” Lauletta said. “He wants to see this team succeed and have his hands deep in making this happen.”

Busch could about fill the time allotted in a Hall of Fame speech if he thanked all the owners he’s worked for over a Cup career that dates to 2000. Jack Roush to Roger Penske; James Finch and Barney Visser; Tony Stewart and Gene Haas; and, since 2019, Chip Ganassi. He even won at Darlington Raceway in 2012 in the Xfinity Series while driving for his brother’s team, Kyle Busch Racing. None of them can dunk.

“Let’s face it, I was a different person when I came into this sport as a blue-collar kid from Vegas that had to scrap and throw fits and to run up front to keep my ride,” Kurt Busch said. “Then my years at Penske, I was trying to learn professionalism and that wasn’t going as smooth as I was hoping for.”

Busch, who turns 44 this season, has steadied his personal and professional life, and grew into a respected mentor in the garage. He even recently joined the Drivers Advisory Council, a collective voice for discussions with NASCAR.

“I’m in the right spot now with being able to give back to young crew members and different people that have helped me over the years,” Busch said.