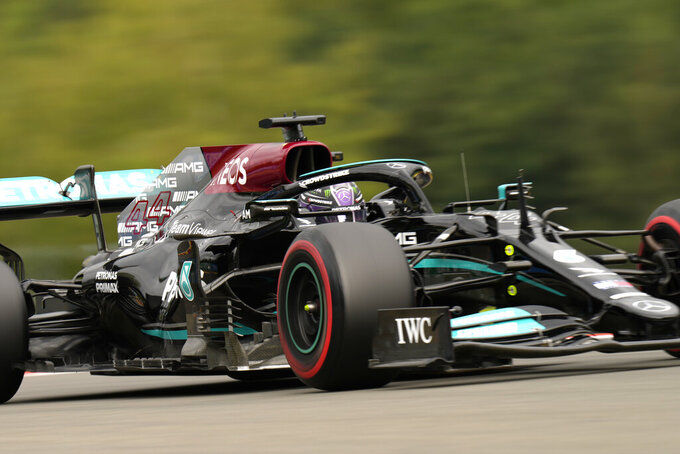 He was .041 seconds ahead of Valtteri Bottas and .072 clear of Bottas' Mercedes teammate Lewis Hamilton, the seven-time defending Formula One champion.

With three minutes left, Verstappen lost the rear of his car and damaged his rear right tire after sliding off into a gravel section and hitting a tire wall.

The red flag halted the practice and there was not enough time to restart as officials cleared gravel and debris off the track.

Conditions had improved in the afternoon and the 7-kilometer (4.3-mile) Spa-Francorchamps circuit was drier than it was at noon.

Despite this, Verstappen and others still struggled with grip.

Then, moments later, the red flag came out for a few minutes when Ferrari driver Charles Leclerc lost control exiting a turn and slid into the crash barriers, damaging the front left tire of his car.

“Sorry, guys,” the driver from Monaco said on team radio.

He was .164 seconds quicker than Verstappen, who led for most of it.

AlphaTauri driver Pierre Gasly was .5 seconds behind Bottas with the third fastest time.

Although Hamilton finished 18th in that session, he was on course to set a leading time before he was impeded by the Williams car of Nicholas Latifi with about 10 minutes remaining.

A slight downpour shortly before the start and overcast skies made for damp conditions.

Japanese driver Yuki Tsunoda spun his AlphaTauri car early in the session and veteran Kimi Raikkonen clipped a wall with his Alfa Romeo entering the pits toward the end.

There is a third and final practice on Saturday morning ahead of qualifying in the afternoon.

Hamilton is chasing a fifth win at the Belgian GP and a record-extending 100th win overall.