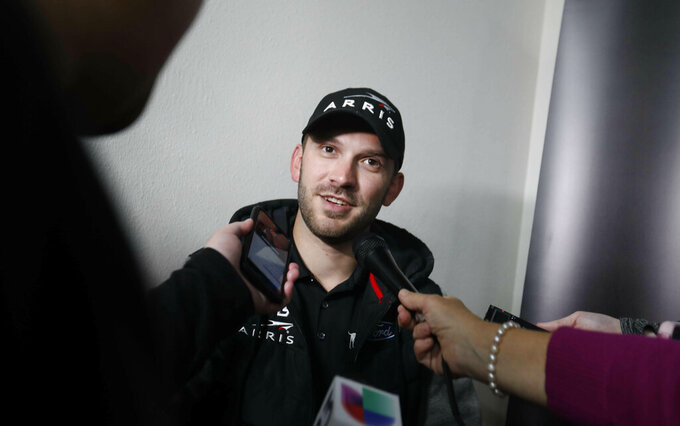 Only six races in with his new team, Suarez is coming off his second top-10 finish.

"It's always good to be with a group of guys like this. Last year, I wasn't unhappy, it was just a little bit different, and this year I just feel more relaxed ... just to do my thing," he said Friday. "I feel like now we are consistent, moving in the right direction."

Suarez qualified fourth for Sunday's race at Texas Motor Speedway, the NASCAR track closest to his hometown of Monterrey, Mexico, just under 600 miles away. He had a group of about 10 friends making the trip from Mexico to TMS to watch him race.

"It's the only race track that actually my family and friends, they can drive from my hometown. It's always cool," said Suarez, 27. "So it's always fun to come to Texas."

After two Cup seasons and 21 top-10 finishes with Joe Gibbs Racing, the team for which he won the 2016 Xfinity championship, Suarez needed a new ride after 2017 Cup champion Martin Truex Jr. was hired by JGR.

His second chance at NASCAR's top level came when he replaced Kurt Busch in the No. 41 Ford for Stewart-Haas Racing.

"It's been average. I think it's been OK," Suarez said about his season. "There's a lot of room to improve, but I don't want to sweat it yet. We have a lot of potential to do good things with this car. ... We still need some speed, some just raw speed, but we're going to get there."

Suarez, who advanced through NASCAR's diversity program, is the only non-American full-time driver at the Cup level.

He started karting in 2002 and won the Mexican national championship five years later. He won 10 races in the NASCAR PEAK Mexico Series in 2008 then moved to North Carolina to pursue NASCAR's national level.

After being the Xfinity Series rookie of the year in 2015, and winning three races on way to his 2016 Xfinity title, JGR had an unplanned Cup opening when Carl Edwards suddenly and unexpectedly retired after the 2016 season — opening that seat for Suarez.

When Suarez was walking up pit road after his 10th-place finish last week at Martinsville, he was sprayed by a drink from a can that was apparently thrown and burst open when it hit the ground.

"I don't think it was thrown at me. The guy had to be extremely good to try to hit me that close while I was walking," Suarez said Friday. "I turned around and saw a lot of drunk people there, but I doubt it was for me. Who knows? ... I don't care."

But Suarez said there was nothing yelled at him or about him before that happened, as some Twitter posts this week suggested.