NASCAR bet more than $1 million to bring cars into Coliseum 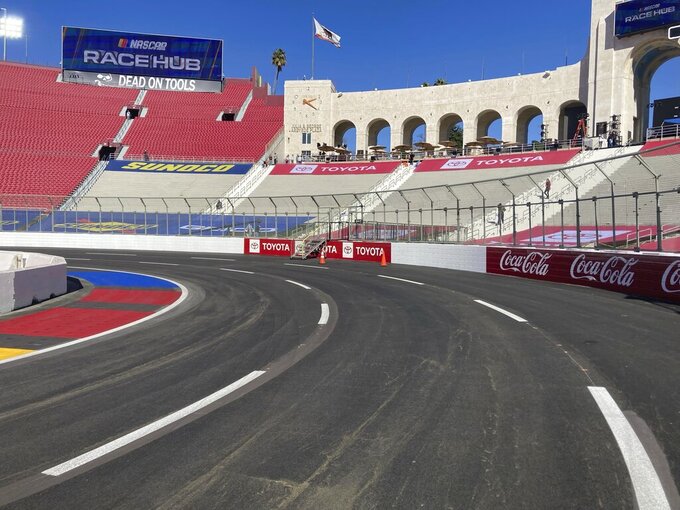 Turn 1 of a temporary auto racing track is viewed inside LA Coliseum ahead of a NASCAR exhibition race in Los Angeles, Friday, Feb. 4, 2022. NASCAR is hitting Los Angeles a week ahead of the Super Bowl, grabbing the spotlight with its wildest idea yet: The Clash, the unofficial season-opening, stock-car version of the Pro Bowl, will run at the iconic coliseum in a made-for-Fox Sports spectacular. (AP Photo/Jenna Fryer)

LOS ANGELES (AP) — NASCAR's top stars have seen the Los Angeles Coliseum on television and they know what it looks like as a football stadium.

But as a racetrack? This they had to see right away, up close as soon as they arrived in Los Angeles.

Much of the NASCAR industry descended on the Coliseum shortly after touching down to get a sneak peek of this bold new venue. NASCAR has taken its biggest gamble yet by moving its preseason exhibition race inside the Coliseum, renovated at a cost of more than $1 million into a temporary quarter-mile asphalt track for a Sunday night sprint shootout.

As the Fox Sports team attempted to explain why the Coliseum is such a progressive step for the sport, a sound check of the audio system drowned out their excitement. Pumped through the speakers was a collection of hits by Ice Cube, the headliner of a halftime act worked in to the Busch Light Clash's run of show.

“What’s it going to take for everybody to consider this event a success?” asked Tony Stewart, the NASCAR Hall of Famer who will join the Fox Sports booth this weekend. "I think the key word is event. This is not just a race. This is an event at a very special place, a very special venue.

The track doesn't officially open until Saturday for a morning practice session followed by early evening qualifying. The Clash is Sunday night but is preceded by heat races that will determine which 23 drivers advance to the main event. The heat races will eliminate 13 drivers from advancing into the finale; only reigning Cup champion Kyle Larson is locked into the field.

The Clash is 150 laps, caution laps won’t count, Pitbull has a pre-race a show, a DJ will be on hand for breaks and Ice Cube has a full stage set for his halftime show.

So the drivers showed up Friday to get a first look at the smallest track most will have ever raced on. At a quarter mile, the transformed Coliseum is almost half the size of Bristol or Martinsville, which both measure at just over a half-mile and NASCAR's smallest venues on the Cup schedule.

Los Angeles Mayor Eric Garcetti also dropped by to see the show that precedes next week's Super Bowl. When the idea of a race at the Coliseum was first broached, Garcetti couldn't grasp the idea.

“I was like, 'You've got to be kidding me. Where? Like, outside the Coliseum?'” Garcetti told The Associated Press after touring the iconic stadium. “My first thought — it was going to be around the Coliseum. Now when you see it, you realize they pulled off a miracle.”

The track was built over USC's football field, and Coliseum general manager Joe Furin conceded the grass that's been covered by asphalt is now dead. But Furin also noted that when NASCAR broke ground on the track in December, it happened to fall on the 100th anniversary of the groundbreaking for the Coliseum.

“The NASCAR event is completely out of the box,” said Furin, “but it is absolutely a worthy event.”

The Clash has been held at Daytona International Speedway every year since its 1979 inception when the made-for-TV event was created as a tune-up for the season-opening Daytona 500. But Ben Kennedy, the 30-year-old great-grandson of NASCAR's founder, is now the senior vice president of strategy and innovation, and he's unafraid to break from the same old way his family has always run the show.

“It’s been a significant investment by NASCAR,” said Steve O’Donnell. “We made a big bet on this, but we think it’s the right thing to do for the industry. When you look at investments, particularly from our standpoint, we’re going to be bold and aggressive if we feel like that’s a way toward future growth."

NASCAR is hoping to piggyback on the hoopla surrounding the Super Bowl, scheduled a week from Sunday at Sofi Stadium, less than 10 miles away. The hometown Rams will play for the NFL championship in a whirlwind week of sports for the city.

Los Angeles has continued to see high levels of COVID-19 infections and Garcetti was under scrutiny recently for not wearing a mask at the NFC title game. Under a Los Angeles County health order, masks are required at all times, with limited exceptions, and Clash fans over the the age of 5 will need to provide proof of vaccination or a negative COVID-19 test.

NASCAR’s competitors are exempt from the rule. Anyone can compete so long as they meet NASCAR’s requirements, and NASCAR does not require vaccination or test competitors.

Garcetti noted that the Coliseum will be used for the men's World Cup tournament in 2026, and the famed facility will be the first to host three Summer Olympics when the Games are in L.A. in 2028.

“Los Angeles is the sports capital of the world, and it really feels like it this week. We can (host) NASCAR one Sunday and have the Super Bowl the next Sunday, all while the NBA and NHL are continuing,” Garcetti said. “We're preparing for what really will be a golden decade.”