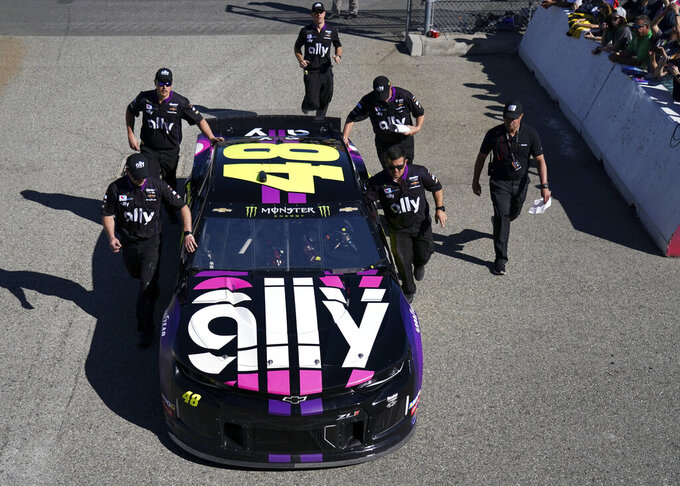 FONTANA, Calif. (AP) — Kyle Busch was dominating yet another race when a speeding penalty on pit road dropped him to the middle of the pack at Auto Club Speedway.

Busch had to pass 17 cars in 73 laps on sizzling old asphalt to get his landmark 200th victory across NASCAR's three major series.

Busch didn't even need 50 laps. He capped a series of brilliant passes by drafting off Joey Logano and Brad Keselowski to seize the lead again, and with this superb driver behind the wheel of a standout Joe Gibbs Racing Toyota, absolutely nothing was stopping Busch's drive into history.

Busch tied Richard Petty's NASCAR record with his 200th win Sunday, making an impressive late surge to claim the Cup Series race on the same weathered Fontana track where he got his first Cup win.

"It certainly is a monumental moment for all of us," Busch said. "I knew we had a great race car and we were fast. I just wasn't sure how we were going to able to come back through traffic and get through the field. Maybe the stars aligned a little bit more perfectly today."

Busch dominated the first two stages before that speeding penalty added a degree of difficulty to this win. After he carved through the field he was aided by a timely late caution that helped Busch take the lead for good with 26 laps remaining.

The win was the fourth Cup victory overall and the third in seven years at Fontana for Busch. He has earned 53 of his 200 wins in the Cup Series, along with 53 in the Truck Series and 94 in Xfinity.

Busch previously expressed ambivalence about the achievement, saying 200 is just a number that doesn't compare neatly with Petty's achievements. All 200 of Petty's victories were in NASCAR's top Cup Series.

Busch's excitement was still obvious after crossing the line.

His team handed him a white flag with a logo emblazoned with "200 WINS" to display from his window during his celebratory drive across the track where he earned his first Cup victory way back in September 2005. He then stood atop his car and waved it toward his large Southern California fan base before taking his customary bow.

"Feels just like No. 1," he said. "Feels just like yesterday. That was such an awesome race car. Dang. I'm glad we put on a heck of a show for these fans. To win 200, whatever it means, it means a lot to me."

"I just wish that we could keep it going, running strong, running well, and winning races."

Logano was 2.534 seconds in back of Busch, while Keselowski finished third, unable to catch the winningest driver of their era while Busch became the first repeat winner this NASCAR season.

Busch equaled Petty's victories mark in the 998th race of his 17-year career. Petty competed in 1,184 NASCAR races over 35 years.

In the barstool debate, detractors point to Busch's many advantages in the Xfinity and Trucks series while observing that Petty's 200 wins all came in NASCAR's top series, compared to just 53 for Busch.

Busch's defenders note his impressive win percentages and the fundamentally different nature of NASCAR competition these days, when a larger field of elite drivers competes in every race all around the country as opposed to the fields of varying depth and quality faced by Petty largely in the Southeast.

Anybody watching Busch's electrifying move through the field at Fontana couldn't doubt his sublime talent.

"He made a couple of moves where I felt like, 'Holy mackerel," said Gibbs, his boss for the last 12 seasons. "Really with a passion, the way he drives the car, we appreciate it so much. I think he's an unusual athlete. If there's anything in front of him, he's driving a race car, he's going to try to get it. That showed up today."

More things to know about Fontana:

Busch reached the brink of the record by sweeping last weekend's two races at Phoenix, but he missed his first chance to tie Petty in the Fontana Xfinity Series race Saturday because of a disastrous late pit stop. He also could have hit the mark sooner if he hadn't been nabbed for speeding on pit road two weeks earlier at his hometown track in Las Vegas. Busch had barely crossed the line Sunday when his mind went to those disappointments — no surprise to those who know his singular mindset.

"Can you imagine if I could have got Vegas and Xfinity yesterday?" Busch said over the radio. "How many in a row? How many?"

Kurt Busch also had an outstanding race, finishing sixth after starting 21st. He promptly jumped out of his car to join his younger brother's celebration of a landmark win.

"He was the lazy one on the couch not doing much when we were kids," Kurt Busch said. "But a number is a number, and it is significant and I am really proud of him. When you are running Trucks, Xfinity (or) Cup, you are wearing your body out every day going after it. And anytime I've run Xfinity and then have to go back it up with a Cup race, it puts a toll on your body. He just keeps going and going. I am proud of him."

Busch has back-to-back wins, but he only has a 15-point overall lead on Logano, who posted his third top-four finish of the young season. The Team Penske star also posted the best Fontana finish of his 11-year career. Team Penske had all three of its drivers in the top-five as Blaney was fifth to join Keselowski and Logano.

While Busch excels, another great is struggling. Jimmie Johnson finished 17th after starting 11th, leaving him 14th in the current points race. The seven-time Fontana champ hasn't won in 64 races since June 2017.