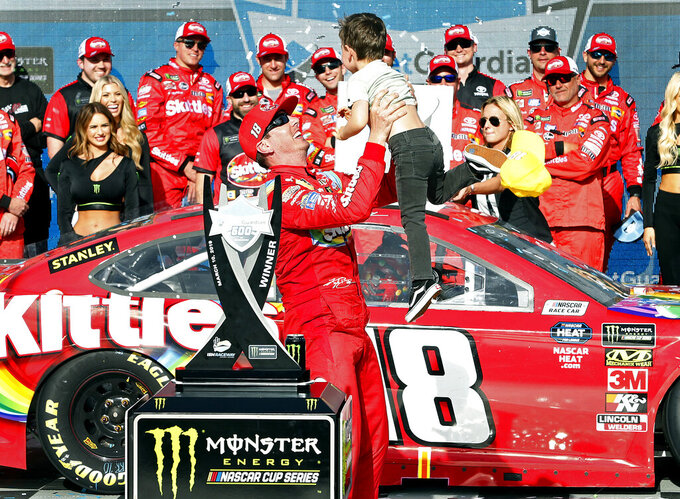 PHOENIX (AP) — Joe Gibbs has spent his career watching Hall of Fame-caliber athletes ply their trades, whether as the Super Bowl-winning coach of the Washington Redskins or the title-winning owner of a race team.

In his mind, what separates them from a run-of-the-mill star is an insatiable will to succeed, the kind of drive that allows them to reach the next level. They set goals, sometimes absurdly difficult to achieve, and then spend every ounce of sweat and blood to reach them.

With Kyle Busch one win away from that milestone following his weekend sweep of the Xfinity and Cup series races at ISM Raceway, his 78-year-old owner is ready to group him with the elites.

Busch will have two opportunities to reach the milestone this weekend at Auto Club Speedway in Fontana, California. He will be back in his Xfinity ride seeking his third straight win in the series, then will hop in his No. 18 Toyota to chase his 53rd win in NASCAR's top series — a far cry from when "Rowdy" made his Trucks Series debut as a 16-year-old in 2001.

"It's pretty incredible, honestly, with what he's done in the modern day to be able to do that," said Joey Logano, one of his former teammates. "I know he's got a lot of Cup wins to go with the Xfinity and Truck wins, but the Cup wins, to me, are the most impressive part — that he's able to do that."

After a couple of feeling-out rides for Hendrick Motorsports in 2004, Busch jumped into a full-time ride and never really looked back. He won twice in 2005, finished in the top 10 in points the following season and continued his march toward the pinnacle of his sport.

He moved to Joe Gibbs Racing in 2008 and really caught fire, winning seven times, and he captured the series championship four years ago by winning the year-end race at Homestead. Just about the only trophy he's missing from his case is the Daytona 500.

Busch has built a 77,000-square foot facility that houses his own race team, along with most of the hardware he's won over the years. Trophies are stacked upon top of other trophies, and the cases that house his Bristol wins are particularly full.

"We've got our fair share of trophy cases we've gone through," he said with a smile, "and every time we get a new one we seem to fill it up. They're all over the place."

So is Busch. His successful Truck Series program soaks up plenty of time, especially when he slips behind the wheel for a weekend. He usually runs the maximum number of Xfinity races. He has been among the fastest cars in the Cup Series for years, regardless of engine, body or rules changes.

He also finds time to dote on his wife, Samantha, and son Brexton, hoisting him up in victory lane on Sunday.

"I guess the fact that's impressive to me is he owns his own truck and he's running his own race team there. That's impressive," Logano said. "It's hard to do and it's something I don't ever really want to do. Obviously, when he's running the Gibbs Xfinity cars they're so fast, and he's able to stack them up there as well, and he's not too bad in the Cup Series."

Where he will ultimately stack up among NASCAR greats is a worthy debate.

Richard Petty won a record 200 times in its top series, though that was a different era. The King is tied with Dale Earnhardt and Jimmie Johnson with seven championships apiece. And more obscure records such as lead-lap finishes are held by Jeff Gordon, himself a four-time Cup champion.

Then again, Busch has been able to win in just about anything with wheels, and the brother of Cup Series driver Kurt Busch is competing in arguably the most competitive age in the sport's history.

"You know, we've been talking about it for a long time," he said of 200 wins, "and certainly, I don't know what to say that I've not already said. It's a goal I set out a long, long time ago."

He doesn't remember exactly when, but chances are it came when he began racking up victories with Gibbs' team. And it hardly surprises Busch's owner that he not only set such an audacious goal, but that the 33-year-old driver is already close to accomplishing it.

"I just think he's an unusual talent," Gibbs said, "and all of us that watch sports, me included, enjoy watching those unbelievable athletes, and we ask, 'How does that happen?' He can just drive the thing when it's several degrees past where a normal person can drive it, and it's just a gift."