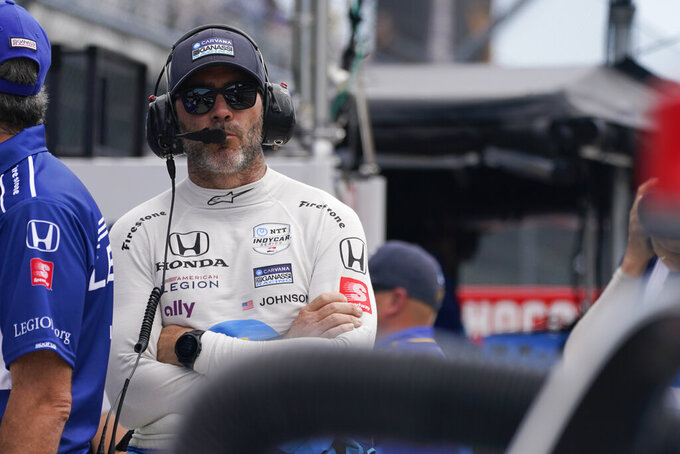 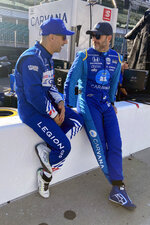 INDIANAPOLIS (AP) — Jimmie Johnson set his alarm for 5:48 a.m. — he uses the number 48 in nearly all his mundane activities — hoping to get a workout in before opening day at Indianapolis Motor Speedway.

Excitement got the best of him.

Johnson awoke 15 minutes before his alarm went off, anxious to get started on preparations for his Indianapolis 500 debut. It's taken Johnson 46 years, but he will finally achieve his childhood dream May 29 as an Indy 500 rookie.

“I am ecstatic and ready to go,” Johnson told The Associated Press on Tuesday morning as he sat with teammate Tony Kanaan on the pit wall at the iconic speedway.

The dream to run “The Greatest Spectacle in Racing" took a while. His career path steered him into NASCAR and he won a record-tying seven Cup Series titles. He left NASCAR at the end of 2020 to try IndyCar with the caveat he would not run ovals out of respect for his wife's apprehension about the safety of open-wheel racing.

It gave him two weeks off last May and he finally attended his first Indy 500. Johnson was a spectator, a fan and an NBC Sports analyst. By the time Helio Castroneves took the checkered flag for a record-tying fourth Indy 500 win, Johnson knew he wanted to be part of the show.

He just wasn't sure how to make it happen.

“I think even 12 months ago today, I didn't think it was possible,” he told AP. “After the race, I started the process I needed to at home, and within the shop, and Tony (Kanaan), and it still took months and months and months to get it right. But when I look back at just 12 months ago, there was no chance of this happening.”

Getting into the 500 started with convincing wife, Chani, that the cockpit-protecting aeroscreen IndyCar added in 2020 had dramatically improved safety concerns surrounding the drivers' exposed heads. Then he had to make sure Chip Ganassi Racing would still have a 500 seat for Kanaan, who ran the ovals last year while Johnson handled road and street courses.

Johnson also had to make sure sponsor Carvana was interested in funding the Indy 500. And then he still had to actually drive an Indy car on an oval to determine if he really wanted this adventure.

All boxes checked, Johnson tested at Texas Motor Speedway and Indy, then finally made his IndyCar oval debut at Texas in March. He finished sixth and instantly became an Indy 500 contender.

Rightfully so: Johnson knows his way around Indy and won four times as a NASCAR driver, including a stretch of three wins in four races from 2006 to 2009. That familiarity was evident Tuesday when Johnson shot to the top of the speed chart in the morning, and was third fastest overall at the end of the day with a lap of 227.722 miles per hour (366.48 kph).

As he pulled off pit lane Tuesday morning for the first time, he looked high above the speedway a nd waved to his father, Gary, who is his son's second spotter for the next two weeks. It's a pairing neither thought would ever happen when Johnson started racing motorcycles as a child.

The rest of the family is not in Indy, yet. Chani Johnson is out of the country for her own work and Johnson has been commuting between North Carolina and Indianapolis since last Saturday's race on the road course so that he could accompany their two young daughters to their own activities.

He plans to return home again briefly Wednesday night and then the entire family will be at the track for qualifying this weekend. Johnson knows his wife still isn't comfortable — he said friends told him she turned her back on the racing early at Texas, “she said ‘I don’t like this, he talked me into something I don't want him to do” — but he believes his strong showing at Texas has prepared her for the Indy 500.

“By the end of Texas she was jumping up and down because I was passing cars,” Johnson said. “Chani is now excited for (Indy) because of how I explained the energy. She of course is a little nervous, but she can feel how special this race is.”

Johnson is one of seven Indy 500 rookies in the field this year, and should he win rookie of the race, he'd be the oldest in the 106 runnings of the Indy 500. Lyn St. James was 45 when she became the first woman to win Indy 500 top rookie honors in 1992.

The rookie award would be welcome, but Johnson is shooting for a trip to victory lane. He believes if he runs a smart race in Ganassi's No. 48 that he has as good a chance as anyone.