Herta to race No. 26 under Andretti banner with Gainbridge 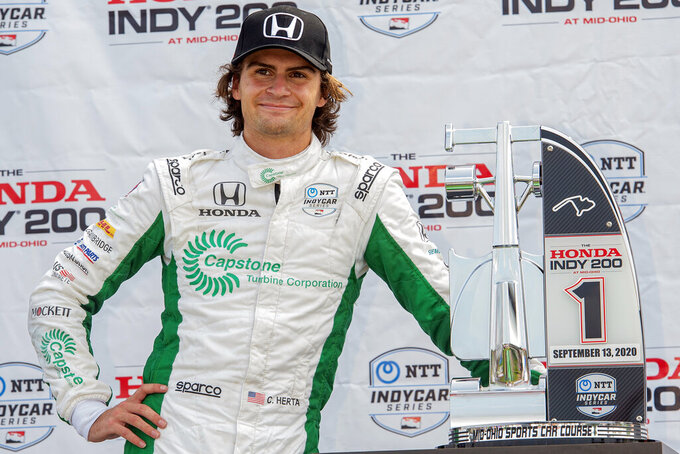 Colton Herta waits on the award stand after winning the IndyCar Series auto race, at Mid-Ohio Sports Car Course, Sunday, Sept. 13, 2020, in Lexington, Ohio. Herta will race for the IndyCar championship in 2021 in a rebranded look from Andretti Autosport. Herta will drive the No. 26 Honda with sponsorship from Gainbridge. He will no longer be part of the Harding Steinbrenner Racing extension of the Andretti team. (AP Photo/Phil Long)

Colton Herta will race for the IndyCar championship in 2021 in a rebranded look from Andretti Autosport.

Herta, 20, will drive the No. 26 Honda with sponsorship from Gainbridge. He will no longer be part of the Harding Steinbrenner Racing extension of the Andretti team. Although Herta was under the Andretti banner in 2020, his IndyCar entry his first two seasons was actually co-owned by Mike Harding and George Steinbrenner IV.

Herta said the Tuesday announcement was “bittersweet” because he's worked with Steinbrenner for several years. Steinbrenner, the 24-year-old grandson of the late New York Yankees owner, first partnered with Herta on an Indy Lights team, then helped move Herta to IndyCar in 2019 by forming a partnership with Indianapolis businessman Mike Harding.

Steinbrenner and Herta at the time were the youngest owner and driver pairing in IndyCar, and Herta became the youngest winner in series history when he won at Circuit of The Americas as a rookie a week shy of his 19th birthday.

Andretti Autosport's relationship with the Harding-Steinbrenner program in 2021 has yet to be determined, and the team is still working on driver deals with Ryan Hunter-Reay, Marco Andretti and James Hinchcliffe. Andretti Autosport aims to be a five-car program again in 2021, but only Herta and Alexander Rossi were signed as of Tuesday.

Herta will retain almost his entire crew from the No. 88 team. Nathan O’Rourke will remain Herta's engineer and Brian Barnhart will still be his strategist.

Herta returns to the No. 26, the number he first used when he started his karting career as an homage to his father. Bryan Herta raced the No. 26 in sports cars at the end of his driving career.

The No. 26 for the last three seasons was raced by Zach Veach at Andretti with Gainbridge sponsorship, but Veach stepped out of the car with three races remaining in 2020 to allow Andretti to plan for a new driver.

Gainbridge, a financial services digital platform that is also the presenting sponsor of the Indianapolis 500, wanted Herta as its driver. Herta has three wins in two full-time seasons and finished third in the IndyCar standings in 2020 ahead of all his Andretti teammates.

“Colton has quickly shown that talent and drive produce winning results," said Dan Towriss, CEO and president of Group1001 and the Gainbridge brand. “Winning demands consistency and the confidence and consistency demonstrated by Colton makes him a great fit."

Herta said his two primary goals for 2021 are improving his performance in the Indianapolis 500 — he was eighth last season — and racing for the IndyCar title.

“For me to get a top-three finish at Indy would set the tone and it's important for me to have a good showing at Indy. We want to win it,” Herta said. “And obviously the goal for the championship is to win it and to compete for more wins and more podiums. If we do that, the championship will come.”

Michael Andretti believes Herta, who turns 21 three weeks after next season's opening race, is ready to race for a title.

“Colton’s career has been on a steady rise," Andretti said. "We’re confident that he will continue to grow and advance, and we’ll see the No. 26 in victory lane soon.”