Gilliland to move Truck Series program from Ford to Toyota 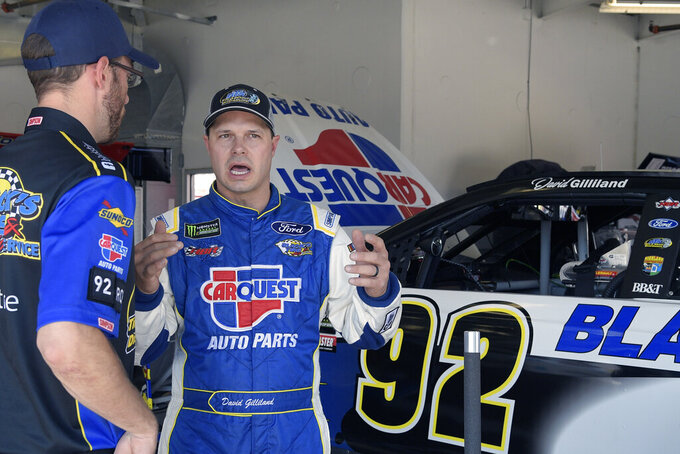 FILE - Driver David Gilliland, right, talks to a crew member in the garage during practice for the NASCAR Daytona 500 auto race at Daytona International Speedway, Saturday, Feb. 17, 2018, in Daytona Beach, Fla. David Gilliland will move his racing organization from Ford to Toyota next season and rebrand it as TRICON Garage, which will field entries in both the Truck Series and ARCA Series. (AP Photo/Phelan M. Ebenhack, File)

David Gilliland will move his racing organization from Ford to Toyota next season and rebrand it as TRICON Garage, which will field entries in both the Truck Series and ARCA Series.

The name change is based on the word’s tri and icon, encompassing the partners in the organization and their plans to compete and win three titles — the driver, owner and manufacturer championships. The team is also involved in three different industries – racing, fabrication and transportation.

“We are thrilled to return to Toyota and compete in the new Toyota Tundra TRD Pro next season,” co-owner Gilliland said. “I’ve seen Toyota’s dedication to the sport firsthand, and we are excited to partner with them going forward. I’m sure this new partnership is going to help TRICON reach our goals of consistently competing for race wins and championships.”

Toyota development driver Corey Heim will run for his first Truck Series championship next season in the No. 11 Toyota. Heim has made 15 starts this season and won at both Atlanta Motor Speedway and Gateway. Tanner Gray will remain in the No. 15 as he runs his fourth full-time season for the team in 2023.

Taylor Gray will begin his championship run in the No. 17 at at Circuit of the Americas in March because the 17-year-old is prohibited by NASCAR age restrictions to compete in the first three races of the season.

Gray has 12 career Truck starts with a best finish of sixth in Richmond in August. He has also raced in ARCA this season with multiple victories on the national, East and West tours.

The fourth truck, the No. 1 Tundra, will feature several drivers throughout the season on a part-time schedule.

“Toyota is pleased to rejoin TRICON with this expanded partnership,” said David Wilson, president, TRD. “We are excited for this new opportunity for our Toyota development drivers and partners to experience TRICON’s success and winning culture.

"The Truck Series is very important to Toyota, and we know TRICON is going to continue to deliver for us as we begin our 20th season in the series.”

Hailie Deegan has spent the last two seasons racing in the Truck Series for Gilliland but as a Ford development driver will not make the move to Toyota with the organization.