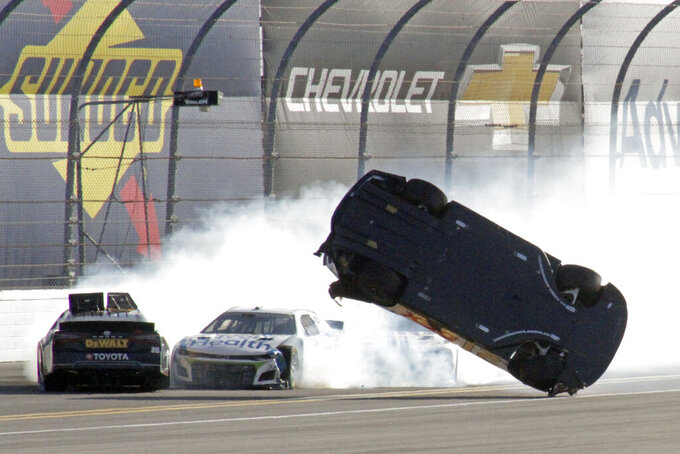 Harrison Burton, right, flips as he wrecks on the backstretch as Christopher Bell, left, and Ross Chastain try but are unable to avoid the crash during the NASCAR Daytona 500 auto race at Daytona International Speedway, Sunday, Feb. 20, 2022, in Daytona Beach, Fla. (AP Photo/Chuck McQuinn)

DAYTONA BEACH, Fla. (AP) — Aric Almirola parked his No. 10 Ford during a brief red flag late in the Daytona 500 and let his mind wander. He had a fast car. He had solid track position. He had everything he needed to finally win “The Great American Race.”

All those thoughts raced through his head as he waited for NASCAR’s season-opening spectacle to resume. And he kept coming back to the same notion: What better time to do something so special than in his 12th and final attempt?

“I thought for sure, like, ‘Man, this is setting up nicely to have that storybook ending,’” Almirola recalled.

Almirola came up short again, finishing fifth Sunday. It was a bittersweet moment for the veteran driver who is embarking on his last full-time season in the Cup Series.

“It’s emotional, honestly. It’s emotional,” he said, his voice trailing off. “Awe, man. That’s a great feeling to be in the thick of it coming down to the end of the Daytona 500. You dream about those things as a kid. I remember sitting up in the grandstands. It’s special. I hate losing, though.”

Almirola had plenty of heartbroken company, including Kyle Busch, Brad Keselowski and Martin Truex Jr. They were four of seven 0-for-ever drivers trying to end double-digit skids in the Daytona 500. Many of them had chances at the end. All of them ended up watching Austin Cindric and Team Penske celebrate in victory lane.

“Every year it doesn’t happen, it makes that intensity go up the next year,” said Fox Sports color analyst Tony Stewart, who was 0 for 17 in the Daytona 500 when he retired.

Truex crossed the line 13th and extended NASCAR’s longest active skid in the 500. It was a disappointing finish for the 2017 series champion who won each of the first two stages in the Daytona 500. But he was caught up in a five-car crash with 50 laps to go when Tyler Reddick broke a part and spun right in front of him.

Busch finished sixth in NASCAR’s premier event. He led four times for 28 laps, passing Stewart for the most laps led in the 500 without winning the race. He was in the mix in overtime despite sustaining some front-end damage during an eight-car crash on lap 62.

Ragan finished a surprising eighth before getting It was a huge payday for Rick Ware’s two-car team. Ragan came out of semi-retirement to drive for Ware. Ragan stepped away from NASCAR’s full-time grind following the 2019 season. But he’s returned every year since to compete in the 500.

The 52-year-old Biffle agreed to drive for startup NY Racing, which spent the last three months hustling to piece together a team, and looked like he might be the first car out when he started having issues in the opening stage. The team pitted, got some things fixed and managed to get back on track and salvage a 36th-place finish.

Keselowski trigged three multicar wrecks, including one just past the start-finish line on the last lap, and came home ninth. It was a tough ending to the start of Keselowski’s new venture. He left Penske after 12 seasons to join Roush Fenway Racing and form RFK Racing. Keselowski, who won a qualifying race Thursday, led six times for a race-high 67 laps but came up short in his bid to finally win the 500 two months after his father died.

Stenhouse was running near the front with six to go when Keselowski gave him a push that turned him sideways and eventually into the wall. He finished 28th.

Stenhouse and others will get another chance in 2023, and none of them should give up hope.

After all, Hall of Fame driver David Pearson needed 15 tries to win the Daytona 500. Kurt Busch needed 16. NASCAR legend and seven-time Cup champ Dale Earnhardt won in his 20th try, a victory that was celebrated by just about everyone in the garage.

Almirola was hoping for something similar, especially in those closing laps, but climbed out of his car with an oh-so-close letdown.

“I believed it, I really did,” he said. “I believed it in my heart that it was going to happen. Just came up short.”