Column: Time for Hamlin to put up or shut up in title race 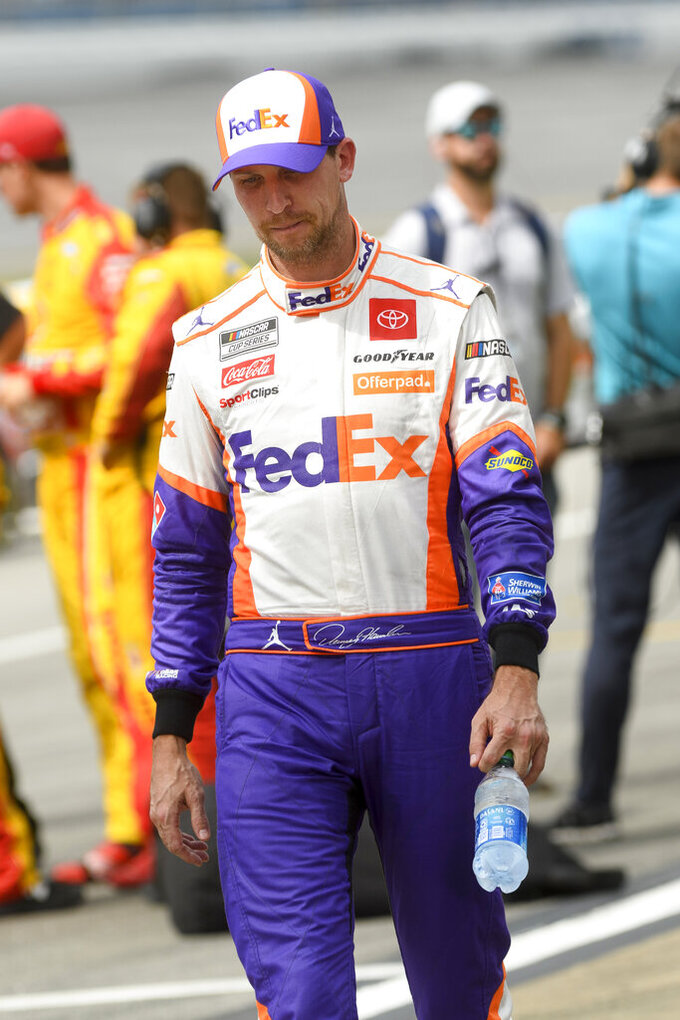 Long recognized alongside Mark Martin as the greatest NASCAR driver to never win a championship, Hamlin gets a fifth try Sunday to at long last grab that elusive Cup Series title.

He finished last in the final four in 2019 and 2020, the year he won eight races and should have been the favorite in the championship round. He ended up third in 2014, the first year of the winner-take-all format, when a botched call not to pit for fresh tires when he was leading cost him the title.

And nobody has forgotten Hamlin's 2010 collapse, when he dominated the penultimate race of the season and had Jimmie Johnson on the ropes until a late fuel stop cost him the win.

Johnson sliced Hamlin's points lead by more than half to 15 points that day, but more importantly he stripped Hamlin of his confidence headed into the finale. Hamlin's legs were shaking under the table during the championship contenders news conference, he was mediocre in practice, qualified a horrific 37th and seemed distant and lost all weekend. When Hamlin spun in the early laps of the race, it sealed Johnson's record fifth-consecutive title.

A decade later Hamlin has still not broken through for a title.

Hamlin, who turns 41 later this month, has long maintained he is fine with his resume, and that he wouldn't trade three Daytona 500s and 46 career victories for a Cup title. And he points out that the elimination format introduced in 2014 that has beaten him three times doesn't necessarily guarantee the best driver and team wins the championship.

Kyle Larson actually has the most to lose Sunday at Phoenix Raceway after nine wins — 10 including the non-points All-Star race — and the regular-season championship. But Hamlin's fifth chance might be the charm and he was on the offensive as soon as the field was set.

Hamlin blocked Martinsville winner Alex Bowman from a proper victory celebration after Bowman spun Hamlin from the lead with six laps remaining. He called Bowman “a hack” in a live television interview in which Hamlin cursed twice and the Virginia native was heavily booed by what should have been a home crowd as his words were aired over the public address system.

Hamlin blamed the fan reaction on fans of Chase Elliott, NASCAR's most popular driver. In a lengthy thread later posted to Twitter, he defended his post-race actions as raw emotion and noted he was twice wrecked by non-playoff drivers with his season on the line.

He pointed to the lack of on-track respect and racing etiquette that has permeated all three national series and challenged his detractors to ask themselves if they'd feel the same about their own favorite driver.

Hamlin basically told the boo-birds to shut up.

“I don’t care what your opinions are. I don’t care what you think of me. You don’t know me,” he wrote. "I got here through the hardest path possible. No last name, no money, no backer. ... I’ve spent 16 years trying to accomplish this sports highest honor. This week brings a new opportunity to achieve it. I’m ready. My team is ready. F(asterisk)k!n bring it.”

Now he's got to back it up in a winner-take-all race against Larson and reigning Cup champion Elliott of Hendrick Motorsports, as well as Martin Truex Jr., Hamlin's teammate at Joe Gibbs Racing. Truex and Elliott have won titles in this format, Larson has never before raced in the finale and Hamlin, well, maybe he's learned enough in four previous losses to close one out.

Hamlin has gradually built his role in the sport in the 17 years since given his break by J.D. Gibbs, the late son of Hall of Fame team owner Joe Gibbs. He was discovered racing Virginia short tracks and entered NASCAR with no shortage of confidence.

He's sparred with veterans and young drivers on and off the track, and even NASCAR itself through social media. Until, of course, NASCAR fined him $25,000 over tweets.

So Hamlin started a driver council intended to give his peers a seat at the decision-making table. His voice has steadily grown as Hamlin immersed himself in understanding the multiple layers in NASCAR's business model with its teams, tracks and television partners.

He secured a long-term role in the sport this year when he founded 23XI Racing alongside friend and fellow co-owner Michael Jordan. The team was built around Bubba Wallace and celebrated its first win last month with his victory at rain-shortened Talladega. 23XI will add a second car next year for Kurt Busch.

But Hamlin has also drawn steady attention for his personal life, which includes an on-and-off again relationship with Jordan Fish, the mother of his two daughters. Fish excoriated Hamlin in a public breakup done on Twitter just days before the playoff opener — a race in which Hamlin ignored the exploding drama of his personal life to score his first win of the season.

“I’m a professional and do my job the best I can,” Hamlin said after the win at Darlington. “My team is always giving the best effort, and I know my job every Sunday.”

His job at Phoenix will be to win the race and Hamlin and he has yet to deliver when the biggest prize is on the line.

Hamlin has done his share of posturing and preening. His first winning Daytona 500 car sits in an annex off his living room. His 30,000-square foot lakefront abode also features a bowling alley, a simulated golf course and a landing pad for the helicopter he used to take his daughters to the state fair last month.

There's a lot of flash and glamour surrounding Hamlin, who leads a bachelor's lifestyle, probably has one of the largest Air Jordan collections (he knows a guy: Jordan), and counts rapper Nelly and golfer Bubba Watson among his friends.

Those Daytona 500 victories and fancy life are nice, but it's time for Hamlin to grab that last big piece of hardware and cement his NASCAR legacy.