Column: Kyle Busch's mark stands on its own not vs Petty's 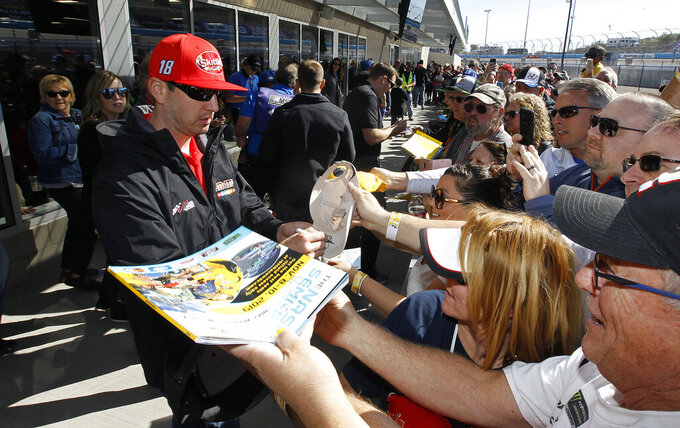 Kyle Busch (18) signs autographs for fans outside the drivers meeting room prior to the start of the NASCAR Cup Series auto race at ISM Raceway, Sunday, March 10, 2019, in Avondale, Ariz. (AP Photo/Ralph Freso)

CHARLOTTE, N.C. (AP) — Kyle Busch has 200 NASCAR national series wins, the same number as Richard Petty, and the totals will never stack up equally into a pair of neat columns that make for an easy debate between the two.

The wins can never be compared because they were in different eras, under different NASCAR rules and against dramatically different levels of competition. Petty and Busch were born 48 years apart, and Busch didn't even meet the minimum age requirement to compete in NASCAR until 11 years after Petty's retirement.

So what is with the obsessive handwringing in comparing the statistics?

Busch on Sunday collected his 200th checkered flag with a victory at Auto Club Speedway in California. Petty won all 200 of his races at the Cup level. Busch's win at Fontana was the 53rd of his Cup career, but accompanies 53 Truck Series victories and 94 in the Xfinity Series — both records for NASCAR's minor league national series.

Win No. 200 came a day after he finished second in the Xfinity race and capped a three-week West Coast road trip in which Busch never finished lower than third in seven races. His stops in hometown Las Vegas, Phoenix and finally California netted back-to-back Cup wins, two Xfinity Series victories and a runner-up finish and a Truck Series win at Vegas.

For those keeping score at home, his average finish was 1.42 in seven events spanning three series.

His older brother, the 2004 series champion, succinctly summarized just how improbable Busch's accomplishments are on a weekly basis.

"When you are running Trucks, Xfinity and Cup, you are wearing your body out every day going after it," Kurt Busch said after visiting his little brother in victory lane. "Anytime I've run Xfinity and then have to go back it up (the next day) with a Cup race, it puts a toll on your body. He just keeps going and going. I am proud of him."

So just remove Petty from the discussion. His 200 Cup victories are a record that will never be broken, and Busch did not break or even tie that mark. What Busch did stands on its own and, no matter how his 200 victories are sliced and diced, he already rates as one of NASCAR's all-time greats.

Is he the greatest? That's an argument without an answer. There's zero consensus as to who holds that title, be it Petty, Dale Earnhardt or Jimmie Johnson, all seven-time champions. David Pearson won 105 races, beating Petty in many of them, so he deserves mention, as does four-time champion Jeff Gordon, who debuted in Petty's finale then blazed his own Hall of Fame career.

There's no denying that Busch is a polarizing figure among fans.

Many love his passion and drive — he didn't hide his disappointment in finishing second in the Daytona 500, which was a 1-2-3 Joe Gibbs Racing sweep and a monumental celebration for the organization. Because Busch didn't win, he didn't really feel like partying.

Other fans find him abrasive, accuse him of being a poor loser and discredit a bulk of those 200 victories because they came in lower series against drivers climbing the developmental ladder. He beat whoever lined up on the track with him, same as Petty did, and it is a stretch to claim Petty always beat the very best in NASCAR. His 1960 victory at Orange Speedway in Hillsborough featured all of 18 cars, eight of which didn't finish the race, and Petty was the only driver on the lead lap at the finish.

Busch seems to fall in the same category as Johnson, who won a record five consecutive Cup titles — seven total championships in 11 years — but has been underappreciated despite his dominance. Johnson's accomplishments have often been taken for granted, and perhaps another driver will come along one day and equal his feats.

But no one will touch Petty's mark of 200 Cup wins, and it is highly unlikely another driver will come close to putting together the numbers Busch has across NASCAR. Busch has been at it full-time since 2003 and he has raced with various rules packages at a time when NASCAR has put the squeeze on how often superstars can step down to Xfinity and Trucks.

In 2015, when he broke his leg and ankle in a crash in the season-opening Xfinity Series race, he came back from injury and won five Cup races and the championship. He added a pair of Truck Series victories and six Xfinity Series wins, as well.

Stop worrying about where Busch stacks up against Petty or anyone else. Appreciate what he continues to do on a weekly basis and that he still cares so much about racing that adding trophies to his massive collection is all that really matters to him.