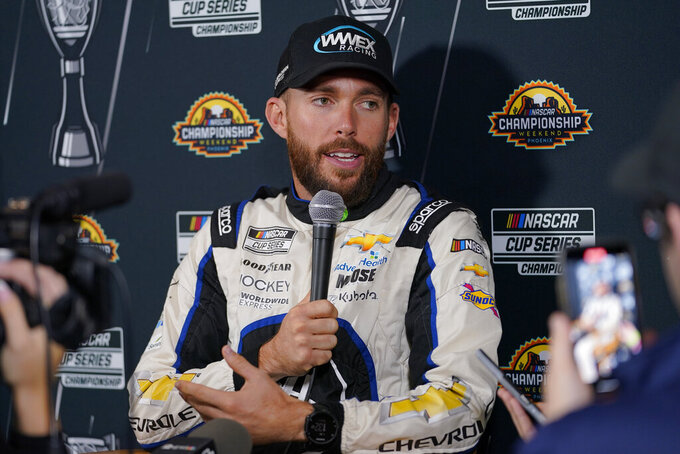 PHOENIX (AP) — Ross Chastain's video game-inspired ride along the wall at Martinsville carried him across the finish line, into the NASCAR championship finale and around the world.

Like it or not — there's plenty on both sides — the hands-free, foot-to-the-floor Chevy slingshot ride catapulted Chastain and NASCAR into the social media stratosphere.

“It’s wild just to try to comprehend how far this has really went,” Chastain said on Thursday. “People that are overseas in Asia or Mexico, people that don’t normally talk about NASCAR are talking about it. They’re going to watch this weekend.”

A championship is on the line this weekend at Phoenix Raceway, but there's nearly as much attention on Chastain's bold move as who will win the Cup Series title between him, Joey Logano, Chase Elliott and Christopher Bell.

Two spots behind Denny Hamlin for the final transfer spot into the finale, Chastain had an out-of-the-video-box thought as he crossed under the white flag for the final lap at Martinsville Speedway.

Heading down the backstretch, Chastain shifted into fifth gear, deliberately smacked into the wall and took his hands off the wheel. His No. 1 Trackhouse Racing Chevy roared past the other cars so fast it looked like a doctored video, even to those watching it in person.

One bold, risky move and the eighth-generation watermelon farmer is competing for a championship four years after driving a motorhome to make extra money.

“I have never seen anything like that,” NBC analyst and former NASCAR driver Jeff Burton said. “When it was happening, I will be blunt with you, I didn’t know what the hell was happening. My initial thought was he hung the throttle on the damn thing and oh my god. Then I realized what he was doing and I was taken aback by it.”

Drivers had always joked among themselves about using a move they tried on NASCAR 2005 on his Nintendo GameCube. Kyle Larson even made a run at Darlington Raceway last year, without much success.

Chastain pulled it off, earning a spot in the championship round for the fourth time by landing on the right side of the sharp edge between foolish and genius.

“Ross should be really credited because only those unique things can take you outside your own bubble and your own world,” JR Motorsports owner and former Cup Series driver Dale Earnhardt Jr. said. “And for a moment this week, we were in a lot of places we usually don’t exist.”

The wow factor pulled eyes toward NASCAR, but had a few within it cover theirs, hoping no one else will try it again.

“This is not the X-Games. This is NASCAR,” Logano said. "There’s a place for it, it was cool, it was a neat move. We all talked about doing it before, he actually did it. He had a good reason to do it and he’s rewarded by being here in the championship, so that’s fun. But the next time it happens, it is not as cool."

If there is a next time, it won't be by Chastain, at least not in Phoenix.

The 29-year-old refused a chance to try it on the NASCAR simulator this week and said the move isn't going to win the race at Phoenix. And slamming a 3,500-pound car into a wall at high speeds isn't exactly fun, despite what it looked like from the outside.

Chastain had his viral moment and, for now, that's good enough, particularly if it ushers in new NASCAR fans.

“'I'm here for it,” said Chastain, who is still trying to answer the 1,000 text messages he's received since Martinsville. “I don't know what the ripples of that will be, but it's probably going to be around long after I'm gone.”