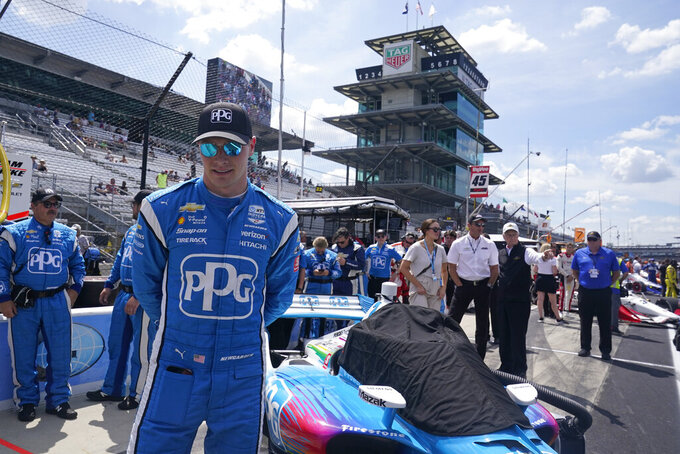 NASHVILLE, Tenn. (AP) — Josef Newgarden wasn't at peak physical condition when he raced last week at Indianapolis, that much he admits.

But sitting out would have crippled his championship chances, so earning the medical clearance to compete following his post-race collapse at Iowa was Newgarden's only choice. He finished fifth to maintain his hold on third place in the IndyCar standings.

“I wasn't 100% but I felt good, I felt normal in a lot of respects, but I'm trying to get myself even better,” Newgarden said. “We needed to be in the race, and I was happy to be there.”

Next up is his home race, the second Music City Grand Prix through the downtown streets of Nashville. Newgarden was an ambassador for last year's inaugural race and the commitments admittedly stretched him thin ahead of his deflating 10th-place finish.

That won't be good enough Sunday for Newgarden's quest for a third IndyCar title. So he slimmed down his obligations ahead of this year's race and used several days this week to reset following his Iowa disruption.

Newgarden won the first race of the Iowa doubleheader last month to take the IndyCar points lead, but crashed hard the next day while leading in pursuit of the weekend sweep. The incident dropped him to third in the standings and then came a medical scare: Newgarden was cleared in the care center but then lost consciousness in the motorhome lot and hit his head.

It's believed he suffered a concussion when his head hit the pavement. That required deliberate care to ensure Newgarden would be cleared to race the road course at Indianapolis last Saturday. When that race ended, he felt “just tired.”

“I was fatigued from the intense week,” he said. “It wasn't so much that I was dealing with symptoms, I just wasn't 100% energy. I feel like this week, I've had more time to rest, and I'll be more myself this weekend.”

Newgarden is in a tight title fight with six drivers separated by 52 points with four races remaining. His Team Penske teammate Will Power cycled into the lead for the third time this season after Indianapolis; Newgarden, with an IndyCar-high four wins this season, is 32 points behind his teammate.

Newgarden is passionate about IndyCar in Nashville and last year packed his schedule with pre-race appearances to promote the event debut. This year he cut back to only his fourth annual ping-pong tournament for charity. About a dozen of his fellow competitors played in the Thursday afternoon tournament. Newgarden's team advanced to the final but lost.

He said the charity tournament was a priority. Newgarden, via an IndyCar bonus program, already earned a $1 million prize this season and $500,000 was split between two charities of his choice. The tournament also benefitted the two charities, Wags and Walks of Nashville and the SeriousFun Children’s Network.

Newgarden's support has helped Wags and Walks — where Newgarden and his wife adopted one of their dogs — break ground on its first facility that will double the amount of pets it helps save each year. Both founder Kathryn Dhall and Clea Newman, who runs the SeriousFun Children's Network that was started by her father, the late actor Paul Newman, attended the tournament.

The debut Music City Grand Prix was a mess — nine cautions that made for 33 of the 80 laps to be run under yellow — and winner Marcus Ericsson opened the race with an airborne crash he recovered from to pick up his second win of the season.

But the traffic jams, track blockage, water on the racing surface and bumpy Nashville city streets all played a part in one of the sloppiest IndyCar races in years. It's led to track tweaks ahead of Sunday's race on Nashville’s 11-turn, 2.1-mile course.

—The restart zone is now located along the long straightaway exiting the Korean War Veterans Memorial Bridge and into Turn 9. That was the starting spot last year; restarts were at the start-finish line.

Colton Herta dominated last year's entire weekend until he crashed with five laps remaining chasing Ericsson for the win. He lauded the change.

“I think it is a good decision. It’s going to be tough as the leader, I think, to get a good jump on the field, but it is a really long straight,” Herta said. “It’ll for sure promote some passing, I believe.”

—The entrance into Turn 9 has been narrowed by 25 feet to 60 feet on the driver’s left to make room for suites in front of a gas station. The change is expected to slow the corner and create a passing zone.

—The Turn 11 apex has been widened by 4 feet, which should offer a better sightline for drivers.

—A bump in Turn 5 has been reprofiled to lessen the disturbance coming up the hill into the turnaround section of the course.

Firestone will debut its eco-friendly guayule tire this weekend as part of IndyCar's sustainability efforts. The tire was used during the pit stop challenge at Indianapolis in May but has never been on the racetrack.

The tire is partially composed of a new sustainable natural rubber derived from the guayule shrub, which requires less re-harvesting than traditional sources of rubber. It will be used as the alternate tire this weekend at Nashville.

Guayule is a drought-resistant, heat-tolerant woody desert shrub native to northern Mexico and the southwestern United States. Natural rubber can be extracted from the branches, bark and roots of the shrub, but because guayule is not currently a commercial crop, Bridgestone must produce the seed and grow the crop.

The guayule natural rubber is located within the sidewall. Bridgestone race tire engineers decided to use the guayule rubber in the entire sidewall because that area is made up of the most natural rubber. This allows Firestone to maintain the same quality and performance as the existing race tire.

Bridgestone plans to incorporate guayule natural rubber into more of its race tires starting in 2023.