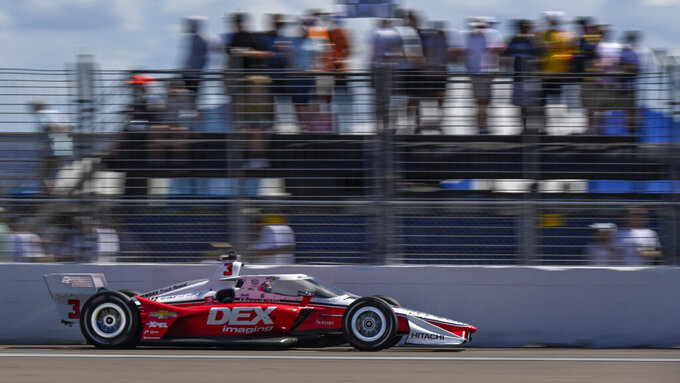 ST. PETERSBURG, Fla. (AP) — Scott McLaughlin drove to his first IndyCar victory and tumbled off his winning car during the celebration.

Out of breath under a clear sky, he sat on the car to collect himself. Then he jumped again, this time because the heat from his exhaust was burning his behind through his firesuit.

Then he sat on the ground to video call his parents in New Zealand, who listened to the race on the IndyCar app. The pandemic has kept McLaughlin from his family for two years and they've yet to see him race in his new home and new series.

He at last called for a cold beer, but when McLaughlin noticed Australian fans in victory lane, he amped up the party. He took off his racing boot and dumped the beer inside for a “Shoey” — Aussie style. The move ruined his favorite racing shoes.

It was quite the day for McLaughlin, who at last proved his decision to leave Australia after three consecutive V8 Supercars championships to join IndyCar. The 28-year-old had a difficult first year but broke through Sunday for his first IndyCar victory in the season-opening race through the downtown streets of St. Petersburg.

“I knew I'm a rookie and I wasn’t kidding myself, but at the same time it’s hard to go from the mindset of, ‘OK, win every week and that’s all that matters, nothing less,’ to going, ‘Hey, I’d love a top-15,’” McLaughlin said. "I don’t work like that. I’m a competitive bloke. I want to win. I want to get poles. I want to dominate races and not even worry about things. I did that for four years, and then coming here... it just mucks with your head, and you’ve got to be realistic about things.

“I put a lot of pressure on myself, like, ‘Why isn’t this happening? Why am I sucking in qualifying when I’m good?’ I’ve done that before, I’ve proved that. It’s a mind game, man, and you’ve got to be on top of it. You’ve got to just believe in yourself.”

Now the New Zealander will have to see how far his first victory takes him: The winner of IndyCar's season opener has gone on to claim the championship the last three years.

“Oh, mate, I don't know. Let's keep it low key," McLaughlin said about his title chances. “Let's be the underdog for a little while longer.”

McLaughlin made his IndyCar debut at St. Pete in the 2020 season finale and declared the experience “far out!" and “the best day of my life apart from my wedding,” even after a crash caused his early exit. In his third trip back, he made qualifying his priority and was rewarded with his first career pole.

He led 49 of the 100 laps but had to hold off reigning IndyCar champion Alex Palou over the closing laps to secure the victory. McLaughlin was held up by rookie Devlin DeFrancesco, the last car on the lead lap, on the final trip around the track. That gave Palou the chance to take one look at a pass for the lead, but he couldn't get close enough and McLaughlin followed DeFrancesco across the finish line for another win for Team Penske.

“It was close. It was really, really close, but I don’t think we had the pace he had,” Palou said. “He was on rails and he knew where to go fast and where to obviously save some fuel at the end. I was just there trying to make some pressure so hopefully he made a mistake or anything.”

McLaughlin stood atop his car in victory lane to celebrate but then tumbled off it to the ground in his excitement.

“I couldn't believe it, I jumped and my legs just wouldn't move, they were like jelly," he said. “And when I hit the ground, I was done. I was trying to make it as delicate as I could, and I just looked like a wombat out there.”

He was greeted with a hug by team owner Roger Penske, who just one week ago celebrated his 85th birthday with Austin Cindric's win in the Daytona 500.

“Thank you to Roger Penske for trusting me and giving me the opportunity to come here," McLaughlin said as he sat on his car trying to catch his breath. “He’s the one that calmed me down last year. He said, ‘Hey, it’s a long story, not a short one.’ To pay back that faith and prove the trust he put in me is a very proud moment.”

But sitting on the car for relief backfired under a clear sky and temperatures nearing 80 degrees Fahrenheit (26 degrees Celsius) at the checkered flag.

“My butt is getting burnt. Oh, that hurt, on the exhaust,” he said. “Oh my God, I’m just — love you Australia, New Zealand, miss you guys. Thinking of everyone in the Queensland floods at the moment. But oh, I can’t believe it.”

The wins by Cindric and McLaughlin are a marked turn for Team Penske, which didn't get an IndyCar driver into victory lane until the 10th race of last season. But the team has exploded out of the gate in 2022: Joey Logano won NASCAR's exhibition Busch Clash in Los Angeles to open the season and Penske now has three straight victories to start the year. Cindric started from the pole later Sunday in the NASCAR race at California.

Palou finished second for Chip Ganassi Racing and Honda, and Will Power, who started alongside Penske teammate McLaughlin on the front row, was third to put a pair of Chevrolets on the podium.

Colton Herta, the defending race winner and favorite, was fourth for Andretti Autosport and followed by teammate Romain Grosjean in his debut with the team. Rinus VeeKay was sixth for Ed Carpenter Racing and Graham Rahal seventh for Rahal Letterman Lanigan.

Ganassi drivers Scott Dixon and Marcus Ericsson were eighth and ninth, and Takuma Sato completed the top 10 in his debut with Dale Coyne Racing.

NEXT UP: IndyCar is off until its March 20 race at Texas Motor Speedway, which will be the IndyCar oval debut for Jimmie Johnson. A seven-time NASCAR champion, Johnson won seven times at Texas.