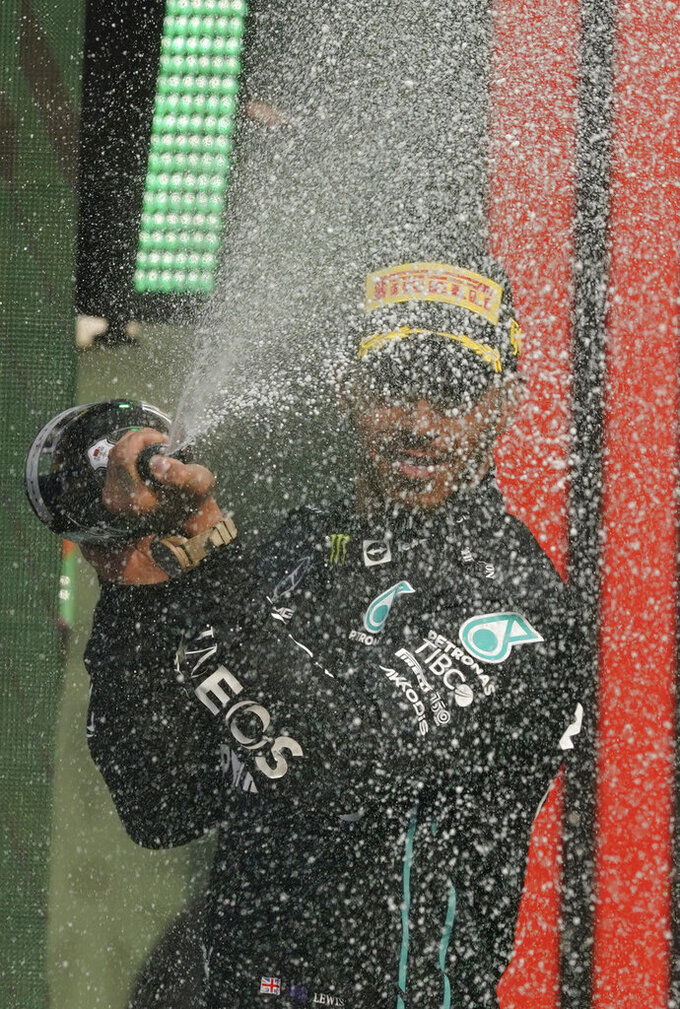 Mercedes driver Lewis Hamilton, of Britain, celebrates at the podium after coming in second in the Formula One Mexico Grand Prix at the Hermanos Rodriguez racetrack in Mexico City, Sunday, Oct. 30, 2022. (AP Photo/Fernando Llano)

Lewis Hamilton is coming off a crushing defeat for a record eighth Formula One championship and on the verge of the first winless season of his 16-year career.

His Mercedes has been a beast to drive all season and a flaw in its design created a bouncing effect that causes his teeth to chatter and his back to ache. New teammate George Russell outranks him in the season standings — Russell is fourth, Hamilton is sixth — and a 24-race schedule is looming for next season, when Hamilton will be 38 years old.

Many thought he'd quit the sport when he lost last year's F1 championship to Max Verstappen in a controversial series of calls in the December season finale at Abu Dhabi, but he returned for what will go down as arguably one of the most difficult seasons for the driver who holds the F1 record with 103 career victories.

Now comes word that Hamilton has opened talks with Mercedes on a multi-year contract extension on the deal that expires at the end of next season.

Ahead of the Sao Paulo Grand Prix in Brazil, where earlier this week Hamilton was awarded honorary citizenship, The Associated Press asked Hamilton why he wants to continue to race into his 40s and why he didn't quit F1 following the injustice he believes he was dealt last year in Abu Dhabi.

He used an analogy of a rare day off he had last week to explain how he's wired. He'd traveled to Kelly Slater's Surf Ranch in Lemoore, California, where Hamilton spent eight hours in the wave pool.

“I was in the pool the whole time, and I fall and I stumble off of a wave and I get back up and try to do it again. And I continue to do that, and that's just something in my DNA," Hamilton told the AP. "I love this sport. I love racing. I would have definitely said at the end of last year that I lost a bit of the love for it, because as you know, it was difficult.

“But I just refuse to let that moment be a deciding factor in my life and my career. And I still feel fit and focused and there's no stopping. You know? We want to get number eight.”

It won't be this season as Verstappen clinched a second consecutive F1 title last month, and despite the progress Mercedes has made in improving its car this year, the team still can't challenge Red Bull on speed for wins. Verstappen, meanwhile, has won a record 14 times this season and heads to Interlagos hoping to extend Red Bull's winning streak to nine consecutive races.

Hamilton, however, is coming off consecutive consecutive runner-up finishes to Verstappen that have buoyed Mercedes.

“Even though we've had the most difficult year this year, I feel that we have climbed mountains together as a team,” Hamilton told AP. “It's been one of the most beautiful experiences to see everyone working so hard. And you know, we just had two seconds in a row and that feels like wins for us.”

Hamilton last November won in Brazil to start a three-race winning streak that sent him into the Abu Dhabi finale tied with Verstappen for the championship. Hamilton dominated the entire race until a late caution scrambled the finish and the since-fired race director broke from protocol in his rulings.

It allowed Verstappen to pass Hamilton for the win and the championship, and Hamilton vanished from public view immediately after the race. He told the AP that two month period after Abu Dhabi was the hardest he's ever had to work on his mental health.

“It was one of the hardest times of my career, for sure I struggled,” Hamilton told the AP, explaining how he surrounded himself with immediate family, put down his phone, and avoided social media and all news. He also went to the beach with his niece and nephew and let them bury him in the sand.

“So I get up every day and focus on being present and making the most of the time that I had and creating memories. It was to keep myself in a happy place and not focus on racing."

Hamilton has not won since that three-race streak ahead of Abu Dhabi, which wasn't really what he expected when he re-emerged at the end of January to begin preparations for 2022. Mercedes wasn't aware it had taken a wrong turn in the development of its car and would need the entire season to undo the damage.

“You just pivot. Instead of how do we get on top of this car and fight for the championship, it was ‘OK, we’re most likely not going to be fighting for the championship, so how do I steer this ship that's going in the wrong direction? How do I keep this team motivated?'” explained Hamilton. “We have dug deeper and become a stronger, more complete team. So I know that when we build the car that I dream of, next year, I know as a team we are more solid and have a better foundation than ever before.”

That Hamilton isn't planning to retire anytime soon is not a surprise to Russell, who has found his fellow Englishman to be the consummate professional and teammate. Russell said Hamilton is dedicated to turning Mercedes around.

“He’s definitely not lifted his foot off the throttle pedal, and he’s definitely the last few races performing probably better than ever,” Russell said. “For me to have the opportunity to be his teammate, to go directly head-to-head with him and grow on this journey that we’re on together, because it really does feel like a journey that the two of us are on, along with the rest of the team, in trying to bring Mercedes back to winning ways.

“I think we’ve got a really, really great relationship, transparent relationship and yeah, be great to be teammates for a number of years to come.”