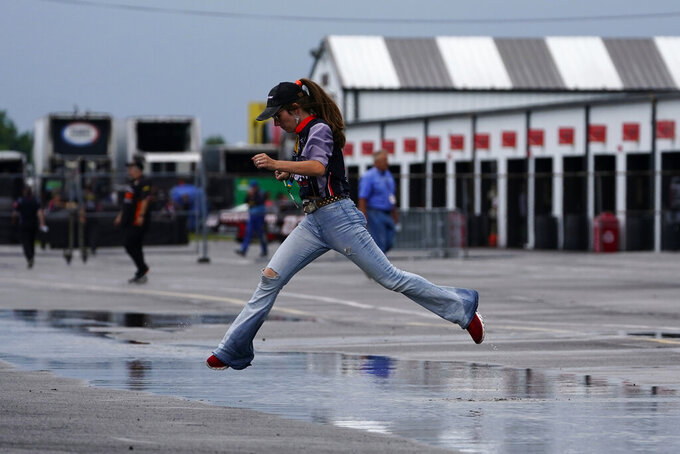 PHILADELPHIA (AP) — Kyle Larson tried to explain the feeling of his role as the public face of the Urban Youth Racing School when a fan -- one of many -- wanted a second of the 2021 NASCAR’s champion’s time.

Larson obliged the request and flashed a smile, just a few seconds out of his day, but a moment years in the making as part of his role with the Philly-based program that creates opportunities in racing for minorities.

Larson might seem an unlikely ambassador in the wake of his 2020 suspension for using a slur during an iRacing event that cost him his ride driving for Chip Ganassi. He instead built on his existing relationship with the program and grew it into something deeper: Zoom calls with students, buying race simulators, making personal appearances -- all while mending fences with the Black community and spreading the word of UYRS’ mission statement.

“The journey that he was on was extraordinary,” NASCAR President Steve Phelps said. “We asked him to do a series of things, and he did so much more than that. To have the school embrace him like they did, that true love affair that exists between the school and Kyle, I think is amazing.”

Sure enough, take a look at Larson now: Reigning Cup Series champion, wildly popular with grassroots racing fans, a dedicated mentor at UYRS and hey, he even won an ESPY this week for best driver. Of course, Larson wasn’t on hand to accept the award in Los Angeles -- he was out racing Wednesday night on the half-mile dirt track at Port Royal Speedway in Pennsylvania.

The entire Hendrick Motorsports fleet of Larson, Chase Elliott, William Byron and Alex Bowman were among a handful of NASCAR drivers that raced Friday at the UYRS Grand Prix in Philadelphia. The race team with Richard Childress Racing driver Austin Dillon won the fundraising event.

The NASCAR stars teamed with UYRS students and local personalities on a makeshift track on the property of a Philadelphia children’s museum. The race was held on a small slice of city property, but the couple of hundred fans, school buses filled with kids, food trucks and DJ’s cranking out tunes gave the course the party vibe that has made street racing so appealing to NASCAR.

NASCAR announced this week its first street course to the Cup schedule with a planned 2023 race through downtown Chicago. The Cup Series will race July 2 against the backdrop of Lake Michigan and Grant Park as part of a three-year deal with Chicago.

“I think it’s going to be an off-the-charts success,” Phelps said at the Grand Prix. “Could we have other street courses in the future? I certainly wouldn’t rule it out.”

The Grand Prix -- as small as it was -- provided a window into the kind of young, diverse environment NASCAR has strived for under Phelps and the rest of the current leadership group. Though, don’t expect so many fans in Chicago wearing Allen Iverson jerseys.

“Just look at the crowd. We’re a sport every day that gets younger and more diverse,” Phelps said. “That’s exactly what this is. Some of these people are younger. Some are more diverse. But I think it’s just this melting pot of people with everyone feeling welcome.”

Larson hoped the scene was a taste of what NASCAR could become on race weekends.

“I think NASCAR works really hard to try and get to that point,” Larson said. “There’s no reason why not. I think events like this is where it starts. This is probably a lot of people’s first times ever behind the wheel of a go-kart. Should be a good introduction.”

The Urban Youth Racing School was hatched by Philly native Anthony Martin, who left a sports marketing career to pursue his love of racing and mix it with a dream of introducing inner-city kids to NASCAR. The school has served more than 7,500 students from ages 8 to 18 over almost 25 years and teaches all aspects of auto racing, including driving and Black racing history.

Before he made the short trip to Pocono, Larson had to pay back the program that stood by him in 2020 and offered him a very public second chance.

“I’ve been able to give back and support them, as well,” Larson said.

Larson’s redemptive path put the school in the spotlight, fueling UYSR with more determination to graduate students to NASCAR.

“Look around, you’ve got a lot of folks of color here, and that’s what the goal was,” Martin said. “We wanted people to come here and see, here’s the drivers, here what they do, and see it for themselves.”

One thing Larson doesn’t have on his plate is time to dwell on his near miss last year at Pocono Raceway. Larson was about a mile away from winning the race when a blown tire denied him a fourth straight Cup victory.

Larson has only one win last season, well off his smashing 2021 season when he won 10 times. Larson does have crew chief Cliff Daniels back from a four-race suspension after the No. 5 Chevrolet lost a wheel at Sonoma Raceway.

“Our car has been fast,” Larson said. “We’ve got to get better on pit road, and get better behind the wheel, too, and hopefully we’ll be in contention more often.”

This year is the first time Pocono will not host two Cup events in the same season since 1982. Once a summer stalwart with a pair of 500-mile races on the schedule, Pocono will run a lone 400-miler on Sunday. Pocono had a race moved to World Wide Technology Raceway, nestled just across the Mississippi River from the Gateway Arch and downtown St. Louis.

Phelps said moving one of the races “was not a shot on Pocono” but the series has simply embraced ambitious schedule changes -- like its preseason race on a track inside the Los Angeles Coliseum. But Pocono wasn’t necessarily going away.

“I’m not suggesting they would come off the schedule, I’m not suggesting that all,” Phelps said. “But I think the opportunity to expose our racing to a different market is important. I think we’ll continue to look to do that moving forward with our schedule. It’s an important thing for us and, by the way, it’s successful.”

The Xfinity Series also races Saturday at Pocono. Sage Karam races at Pocono for the first time since his involvement in a fatal 2015 IndyCar wreck at the track. Justin Wilson died from injuries suffered in the race.

Kyle Busch, still racing without a contract for next season, is a 7-1 favorite to win for a fifth time Sunday at Pocono, per FandDuel Sportsbook. Busch cruised to an 8.654-second victory over Larson in the second race of last season’s Pocono twinbill. He has led a total of 522 laps in 34 career Cup Series starts at Pocono and his average finish at the track 15.1.