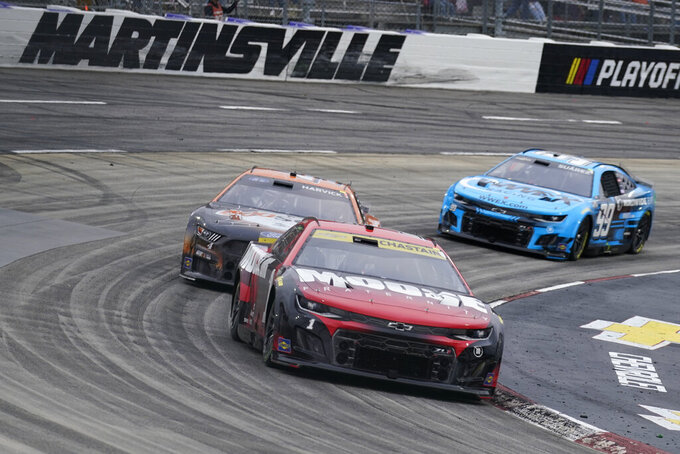 AVONDALE, Ariz. (AP) — Kyle Busch Motorsports is switching from Toyota to Chevrolet for its two new drivers in the NASCAR Truck Series.

Chase Purdy will drive the No. 4 full-time and Jack Wood will have at least 10 races in the No. 51 while sharing it with Busch, other Cup and Xfinity drivers. Busch even teased seven-time NASCAR champion Jimmie Johnson might get a start in his truck.

Busch, the all-time wins leader in the Truck Series, is eligible to run five races as a Cup driver under NASCAR rules. He signed to drive the Richard Childress Racing No. 8 car in September.

KBM also announced Friday it is forming a technical alliance with Rev Racing for an entry in the Truck Series with Nick Sanchez driving the No. 2.

“Obviously, there will be a lot of change at KBM in 2023, but our goal as an organization remains the same that it always has been and that’s to go out and win races and provide the young drivers in our lineup everything they need to reach their full potential,” Busch said. “We have the right people in place to be able to accomplish those goals for our two trucks.”

NASCAR championship contender Ross Chastain was fastest at Phoenix Raceway in Friday's only practice and he didn't need the wall to help him do it.

Chastain became a viral sensation last week when he used a video-game inspired move on the final lap at Martinsville Speedway to earn a spot in the NASCAR Cup Series championship round with Joey Logano, Chase Elliott and Christopher Bell.

Chastain topped the entire board Friday — not just the title contenders — with a a lap at 133.24 mph on the mile oval. Chastain crew chief Phil Surgen doesn't believe Friday practice gives the Trackhouse Racing team any early advantage.

“Obviously the final four are here for a reason,” Surgen said. “I would expect all ... championship drivers to be fast on Sunday.”

Logano in a Ford for Team Penske was seventh in practice, Elliott in a Hendrick Motorsports Chevrolet was 10th and Bell 20th as the drivers prepare for Sunday's winner-take-all finale. The Joe Gibbs Racing camp didn't hide from its poor early showing for Bell, who twice won playoff elimination races to make it to the finale.

“We just didn’t unload like we thought we would and the speed chart definitely showed it,” Bell crew chief Adam Stevens said of the Toyota. "But they’re not handing out any trophies on Friday.”

Chastain, meanwhile, is now a fan favorite and his garage stall was crowded with cheering fans not usually seen by the journeyman or his Trackhouse team, which was Chip Ganassi Racing until it was bought by Justin Marks and Pitbull ahead of its second season.

“The vibe was great. A lot of excitement. A lot of people around,” said Surgen, who praised the rare three-day weekend for the Cup Series and Friday practice. The COVID-19 pandemic has cut the Cup weekend to two days and limited practice at all but a handful of events.

Championship weekend at sold-out Phoenix Raceway is a traditional three-day Cup weekend, which brought a crowd to Chastain's stall that the crew rarely sees.

“It felt really good to have a 50-minute practice. We had been a couple years now with pretty limited practice,” Surgen said. “Most of us remember three, four, five years ago ... when it was four and a half hours of practice. A lot of us get excited for the extra practice now. There was a good vibe in the garage.”

He won't repeat as champion, but is relishing his turn to pass on his thoughts to whoever wins the title this weekend.

“It’s something that’s so special that you want to read it once when you get it and once again before I give it to the next guy,” Larson said Friday. “It’s an extremely special book. That was the thing that I was most excited about from winning the championship was to receive that. I’m sure everyone in the final four right now feels the same way.”

The Champion's Journal tradition started in 2011, when NASCAR vice chairman Mike Helton suggested champion Jimmie Johnson write something in a small brown leather book. The book has been passed to the winning driver every year since, with the contents remaining a secret to everyone except the select few who have won a title.