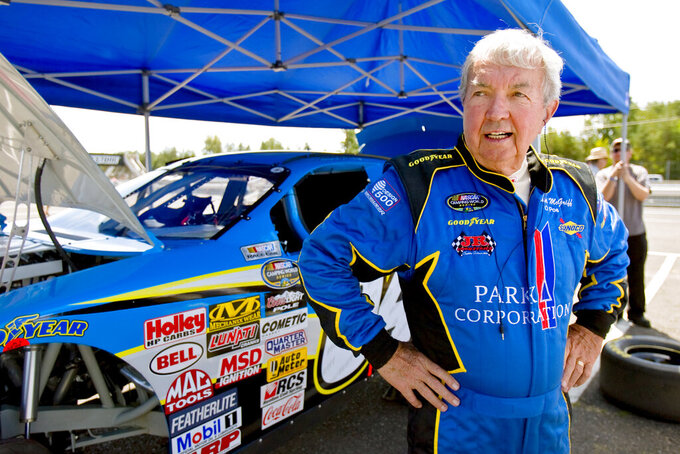 FILE - In this Saturday, July 18, 2009, file photo, Hershel McGriff stands next to his car at Portland International Raceway in Portland, Ore. McGriff was elected to NASCAR's Hall of Fame on Wednesday, May 4 2022. (Ross William Hamilton/The Oregonian via AP, File)

CHARLOTTE, N.C. (AP) — Matt Kenseth was doing yardwork when wife Katie came outside with her phone in hand, letting him know he'd just been selected to the NASCAR Hall of Fame.

A short while later Kenseth “celebrated” the night by cooking dinner for his daughters.

“I never really thought about it,” the even-keeled Kenseth said on a conference call about his chances of making the Hall of Fame.

Fellow driver Hershel McGriff and crew chief Kirk Shelmerdine were also selected to the NASCAR Hall of Fame on Wednesday. Mike Helton was named the Landmark Award winner for outstanding contributions to the sport.

They will officially be inducted into the Hall of Fame in a ceremony on Jan. 20.

Kenseth was a first-ballot selection, Shelmerdine was voted in on his third try on the modern day ballot. McGriff made the pioneer ballot on his seventh try.

The 50-year-old Kenseth, who recently ran the Boston Marathon, drove 18 full seasons on the NASCAR circuit before retiring in 2020 with 39 Cup victories and 20 poles. He's 21st on the career victory list with 39.

“I never looked forward (to the Hall of Fame) when I was racing and I never really looked back at some of the wins that I had," Kenseth said. “It was always the next race and what can I do better the next race?"

He called the selection an honor, saying “I am really grateful for everything this spot has done for me and my family.”

He won the Daytona 500 twice, the Coca-Cola 600 and the All-Star race. He also captured the 2003 Cup Series championship capping a dominating season in which he led the points standings for the final 32 weeks of the season. He made the NASCAR playoffs in 13 of 14 seasons and finished runner-up twice.

Kenseth made an impact from the beginning, winning Cup Series rookie of the year in 2000. He also won 29 Xfinity Series races.

He had the longest driving career ever in NASCAR.

McGriff started 85 races in parts of 28 NASCAR Cup Series seasons, capturing four wins – all of those coming in 1954.

He was one of the best drivers in what is now known as the ARCA Menards Series West. Competing in parts of 35 seasons, McGriff won 37 races — third on the all-time on the West Series wins list. His signature year came in 1986 when he won the series title.

McGriff beat out the 87-year-old A.J. Foyt, who made 128 Cup Series starts over 30 years, winning seven races and finishing in the top 10 36 times.

The 64-year-old Shelmerdine worked as a crew chief from 1977-92 and won 46 races with 15 poles and helped Dale Earnhardt captured four Cup Series championships (1986, ’87, ’90, ’91). Over his 16-year crew chief career with Earnhardt, Ricky Rudd, James Hylton and Richard Childress, he won 46 races and posted top-10 finishes in more than half his starts.

Shelmerdine said he was “in shock” that he got in, saying he thought "it would be a few more years before it happened."

Shelmerdine said being reunited with Earnhardt and car owner Richard Childress in the NASCAR Hall of Fame is special.

“It's always been a surreal thing for me being in the middle of all these legends,” Shelmerdine said. “As the years go by the stats pile up and and you start to be in the sentence with it all.”

Shelmerdine said everyone had their own role on those winning teams simply fit together well. “Everything just clicked together,” he said.

Helton was the first person outside of the France family to be named NASCAR president.