Johnson struggling at Detroit, trying to stay out of the way 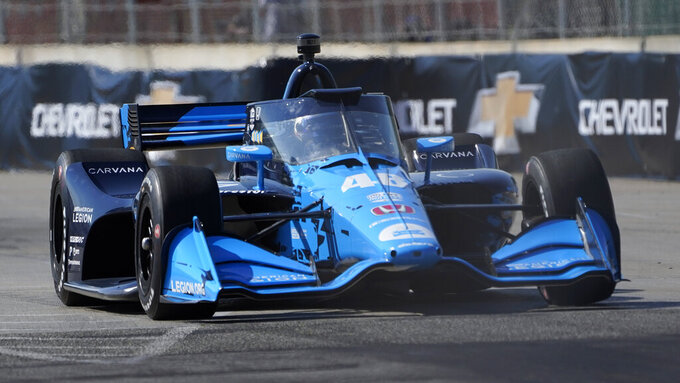 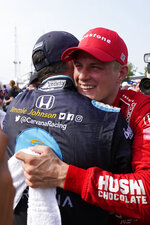 DETROIT (AP) — Jimmie Johnson has struggled to get around the Raceway at Belle Isle Park and at times has been more than 5 seconds off the pace of the leader.

The most challenging track the seven-time NASCAR champion has ever raced was not kind to Johnson in Saturday's first race of a two-day doubleheader: Johnson finished 24th, 14 laps down, because a sensor on his throttle pedal had to be replaced during a lengthy pit stop.

“Although the results don't show it, we had a productive day,” Johnson said.

And he didn't get punched in the face by Will Power, either.

Power was seething following the lone 75-minute practice on the temporary street course around the Belle Isle public park because one unnamed driver continued to hold him up every lap.

It set the paddock abuzz to find the perpetrator, although both Power and Pato O'Ward both exonerated Johnson and said the rookie IndyCar driver does a good job getting out of the way of faster cars.

Johnson did so during Saturday's race when he pulled off to the side of the track so Power, the leader at the time, could cleanly get past him.

Johnson before the race said he spoke to Power immediately after practice and Power revealed to him the driver who was in his crosshairs and assured Johnson he was not the problem.

But Johnson did admit there's a backup created on track when cars approach him because he's having a difficult time on 2.35-mile, 14-turn temporary street course that is so rough and bumpy the only thing Johnson could compare it to was Darlington Raceway before its 2007 repave.

No preparation on the simulator had Johnson ready for just the second street course of his career and fourth IndyCar race.

“That issue is something I have a hard time with and it's largely because I'm the slowest guy out there right now and everybody does everything they can to get by and then back up to give themselves a gap,” Johnson said. “It's more different than anything I've every experienced before.”

Paddock speculation was that Power's frustration was with Ed Jones and Power specifically said: “Just kept backing everyone up. This dude, how many times you want to back up? You eventually have to do a lap time.”

Asked if the Power perpetrator might possibly be backing up to avoid Johnson, Johnson said he did not know.

“He didn't cuss me,” Johnson shrugged.

Johnson in Saturday qualifying went 1 minute, 19.0944 seconds and was eliminated in the first round. O'Ward won the pole for Saturday's race at 1:15.5776, nearly four seconds faster than Johnson.

Alexander Rossi qualified second with only 0.0808 separating him from O’Ward for pole.

Johnson is one of seven drivers in the field making their debut at Detroit, a track O'Ward called on social media a “Proper old school street track.” But in Spanish the 22-year-old was even more expressive, declaring Detroit “Esta pistoooona es para HOMBRES,” — or, “this super track is for men.”

This weekend marks the first doubleheader weekend for the 45-year-old rookie on what is likely the most challenging circuit on the schedule. Chip Ganassi Racing recently added retired driver Scott Pruett to its support team and Pruett will take an individualized coaching role with Johnson.

Dario Franchitti is the official Ganassi driver coach but will spend his time on the radio with the other three Ganassi drivers, including championship points leader Alex Palou, who will start last because of an unapproved penalty for an engine change made during Indianapolis 500 preparations.

Pruett was to be on Johnson's radio for both races at Detroit and Johnson said he's still trying to just stay out of the way as he learns the circuit, the car and improves at this new discipline. Pruett has raced IndyCar, NASCAR and IMSA sports cars.

“I've been the fast guy in a series and watched rookies come in not be aware of what's going on around them,” Johnson said. “On the flipside, Dario is telling me, ‘Hey, worry about yourself. I think you’re putting yourself in a bad position at times because you're worried about others.' One thing I've seen about going off line in one of these cars is that oftentimes it takes a lap, if not more, to get back up. So I'm aware. I will move out of the way, but I am not going to get off the line.”