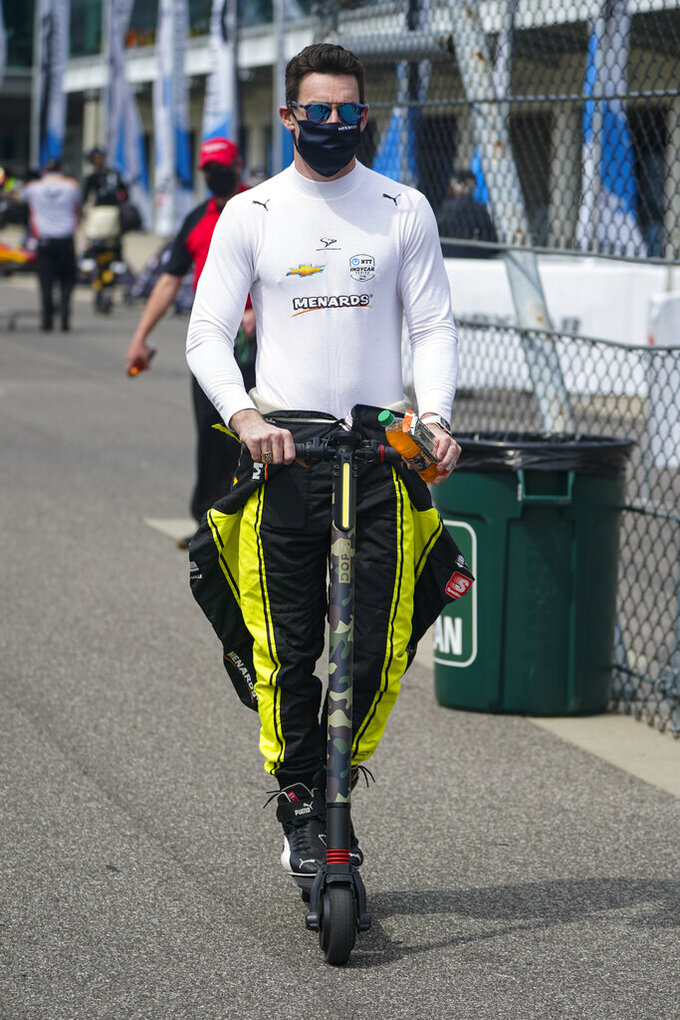 Simon Pagenaud of France rides a scooter through the pit area during practice for the Indianapolis 500 auto race at Indianapolis Motor Speedway in Indianapolis, Tuesday, May 18, 2021. (AP Photo/Michael Conroy)

INDIANAPOLIS (AP) — Max Chilton could have panicked when travel rules stranded him in England and forced him to miss an IndyCar race at Indianapolis Motor Speedway.

Instead, the 30-year-old driver and his Carlin team stayed poised, focused and disciplined.

The composure appears to be paying off as Chilton had the third-fastest lap without a tow Wednesday in practice for the Indianapolis 500. It was a boost after the Carlin team spent most of the first two practice days near the bottom of the speed charts.

“We've always struggled on speedways and super speedways so we made a big, big push over the winter," Chilton said after his lap of 220.799 mph. “I think we were fourth yesterday, third today and we spent the final hour working in race trim, which is something we don't always get to do. So things are going well."

Just being on track was a relief for Chilton, who returned to England last month because he doesn't typically race the oval events. He skipped the doubleheader at Texas and figured he'd have no issues returning in time for last weekend's Grand Prix on the Indianapolis road course.

“We had been allowed to travel with a waiver but something in the administration changed," he said. “That's what we believe it was.”

Chilton was aided by U.S. Senator Todd Young of Indiana, as well as IndyCar Series owner Roger Penske and league president Mark Miles, who teamed to get Chilton into the United States.

Carlin withdrew the entry Friday morning and when Chilton arrived in Chicago halfway through Saturday's the race, he listened to the second half on the radio as he drove to Indy in a passenger car.

When practice for the Indianapolis 500 began Tuesday, there were more bumps. During the first hour of track time, Chilton's air hose came apart and started fluttering in the wind as he turned laps. Then as crew members tried to fix it, light rain brought out a yellow flag. Chilton wound up with the fourth slowest car out of 34 at 221.890 mph.

Rather than make wholesale changes, though, Carlin stuck to the plan. On Wednesday, Chilton moved up to No. 26 with a fast lap of 223.190 but he wound up third on the non-tow leaderboard behind two 500 winners — Alexander Rossi and Simon Pagenaud.

“I think the best thing is we're being disciplined," he said. “We've definitely been in much worse shape."

Four months after Beth Paretta announced she would form a race team of mostly women, she returned to the speedway with a roster of crew members for Simona de Silvestro's No. 16 Chevrolet that includes at least 10 women.

Andra Buzatu, a mechanic who served four years in the U.S. Coast Guard, said crew members have been practicing pit stops at Team Penske's shop in North Carolina. Over the past several months, Buzatu said the team has cut its times from 17 or 18 seconds to roughly five. But it won't be all women on pit lane for the May 30 race.

“The crew over the wall will be co-ed," Paretta said. “The No. 1 priority is safety and then competition. And if you don’t see any women over the wall at the 500, then you'll see that moving forward."

Team owner Dennis Reinbold is back at the 500 with a familiar driver, Sage Karam, a new paint scheme and sponsorship heavy on Indiana businesses.

Reinbold's new primary sponsor is AES Indiana, formerly known as Indianapolis Power & Light. His other sponsors are all Indiana businesses, too — the 500 Festival, Mecum Auctions and Sun King Brewery. Together, they're helping Dreyer & Reinbold Racing get back on track after the COVID-19 pandemic delayed their plan to transition into a full-time IndyCar team.

“We’ve taken the time to refocus and reprioritize what's important to us and that’s this month," Reinbold said. “So we're still trying to grow and become a full-time team. The series is really on fire and growing, and we want to be part of that growth so we're still working toward our goal. It just got postponed a little bit."

Music City Grand Prix officials will honor the late Bryan Clauson by naming its pole-winner award after him.

Qualifying on the street course in Nashville, Tennessee, is scheduled for Aug. 7 — the five-year anniversary of Clauson's death. The 27-year-old racer died from injuries suffered in a crash at the Belleville Nationals midget race in Nebraska.

The trophy celebrates Clauson's racing career and his decision to be an organ donor, which has been credited with saving five lives and helping another 75 lives with tissue donations.

“Bryan Clauson was the definition of a racer. He was an extremely talented driver and just an incredible person,” Music City Grand Prix CEO Matt Crews said. “Losing him was very painful on the entire racing community, but his legacy lives on and there’s no truer statement than that. His heart literally lives on. By presenting the NTT P1 Award winner with the Bryan Clauson Pole Trophy, we at the Big Machine Music City Grand Prix want to recognize Bryan’s generosity and encourage others to #BeTheGift.”