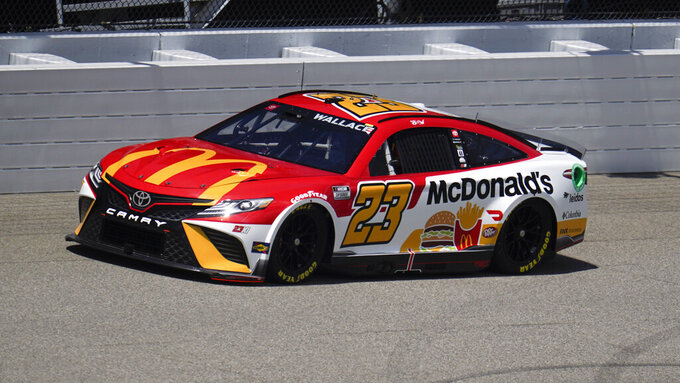 Wallace will drive the No. 45 Toyota for 23XI Racing the rest of the season instead of his usual No. 23. The team announced the move Wednesday. The switch was made because the No. 45 car, previously driven the by the injured Kurt Busch, is competing for the Owner's Championship.

Ty Gibbs had been subbing for Busch the past several races. Gibbs will move to Wallace's No. 23 for the rest of the season.

Wallace will continue with his crew chief Bootie Barker while Gibbs will keep working with Billy Scott. Other than the numbers, 23XI said there will be no changes to the primary partners on either car.

Jordan, who owns the team with racer Denny Hamlin, famously switched from No. 23 to No. 45 when he returned from his first NBA retirement with the Chicago Bulls in 1995. Jordan eventually returned to No. 23 during that year's playoffs.

Busch had qualified the No. 45 for the NASCAR Cup Series playoffs with his win at Kansas this past May. But he suffered a concussion in a crash during qualifying at Pocono and missed the final six regular-season races.

Busch, who was not cleared to race at Darlington to start the playoffs, on Sunday withdrew from the postseason.

23XI team president Steve Lauletta said they consulted with NASCAR and agreed the switch was in the best interest of the organization.

“While Ty has done a great job for us in the No. 45 car, we feel that Bubba’s experience in this car, at the upcoming playoff tracks and his recent momentum will give 23XI the best chance at maximizing our points each weekend," Lauletta said.