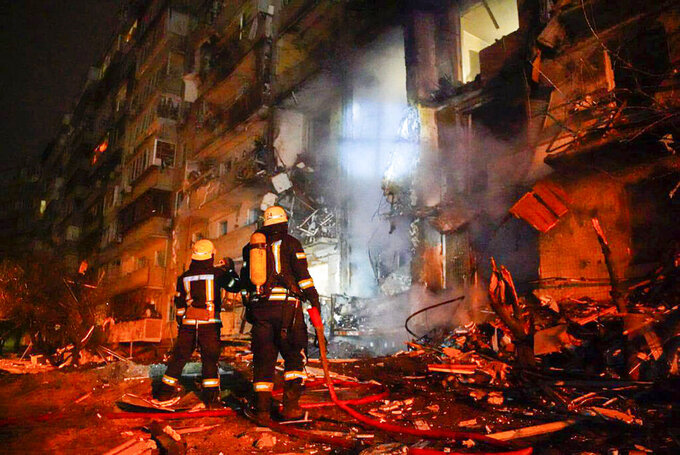 In this handout photo taken from video released by Ukrainian Police Department Press Service released on Friday, Feb. 25, 2022, firefighters inspect the damage at a building following a rocket attack on the city of Kyiv, Ukraine, Friday, Feb. 25, 2022. Russia is pressing its invasion of Ukraine to the outskirts of the capital. That comes a day after it unleashed airstrikes on cities and military bases and sent in troops and tanks from three sides. (Ukrainian Police Department Press Service via AP)

NICOSIA, Cyprus (AP) — After a barrage of airstrikes on cities and military bases around the country, Russian forces were closing in on Ukraine's capital on Saturday. The city warned of street fighting and urged residents to stay inside and take cover.

With growing signs that Russia aims to overthrow him, President Volodymyr Zelenskyy called on Ukrainians to “stand firm,” saying the "fate of Ukraine is being decided right now.”

He refused American help to evacuate, according to a senior U.S. intelligence official, who quoted Zelenskyy saying that he needed anti-tank ammunition but “not a ride.”

It is unclear how much or little Russian forces have seized or the extent of the casualties. Russian Defense Ministry spokesman Maj. Gen. Igor Konashenkov claimed Saturday that since the start of Russia’s attack, its military had hit 821 Ukrainian military facilities, 87 tanks and other targets.

Konashenkov didn’t say how many Ukrainian troops were killed and didn’t mention any casualties on the Russian side. His claims and Ukraine’s allegations that its forces killed thousands of Russian troops could not be independently verified.

However, U.S. defense officials said they believe the Russian offensive has encountered considerable resistance and is proceeding more slowly than Moscow had envisioned, though that could change quickly.

Here are the things to know about the conflict and the security crisis in former Soviet-dominated Eastern Europe:

Kyiv officials are warning residents that street fighting is underway against Russian forces. They advised residents to remain in shelters or if home to avoid going near windows or on balconies, and to take precautions against being hit by debris or bullets.

The Ukrainian military said a battle was underway near a military unit to the west of the city center. Kyiv Mayor Vitaly Klitschko said new explosions shook the area near a major power plant that the Russians were trying to attack.

A missile slammed into a high-rise building on the southwestern outskirts of Kyiv, Klitschko said Saturday. He said rescue workers were heading there and posted an image on a messaging app, showing a gaping hole on one side of the building.

Russian troops were trying to advance on the city from several directions. The Russian invasion of Ukraine began Thursday with massive air and missile strikes and ground troops moving in from the north, east and south.

The Russian military said Friday it had encircled the cities of Sumy and Konotop in northeastern Ukraine, but was “taking steps to ensure civilians’ safety.” It said it also seized a strategic airport outside Kyiv, allowing it to quickly build up forces to take the capital.

Meanwhile, a senior U.S. defense official said Friday it’s estimated that Russia has now launched more than 200 missiles into Ukraine and some have hit residential areas, although it was unclear if they were deliberately targeted.

A second Russian Ilyushin Il-76 was shot down near Bila Tserkva, 50 miles (85 kilometers) south of Kyiv, according to two American officials with direct knowledge of conditions on the ground in Ukraine.

HINTS OF TALKS TO STOP THE FIGHTING

Hopes for a negotiated end to the war rose and then dimmed on Friday after a tentative agreement to discuss Zelenskyy’s offer to designate Ukraine a non-aligned country appeared to break down.

The Kremlin initially said it was ready to send a delegation to Belarus, then later backpedaled, saying the Ukrainian government had indicated it preferred to meet in Warsaw and then halted communications. Russian Foreign Minister Sergey Lavrov also questioned the sincerity of the Ukrainian president's offer and said Zelenskyy should have agreed to talks earlier on.

But late Friday, Zelenskyy spokesman Sergii Nikiforov wrote on Facebook that the two sides were consulting on a place and time for the talks.

Hungary’s foreign minister, Peter Szijjarto, offered Budapest as a possible location. Also writing on Facebook, he said he put the proposal to both Russia's and Ukraine's government and neither dismissed it.

Before the invasion, the West had rejected Russia’s demand to keep Ukraine out of NATO. Putin used the refusal to justify the invasion, claiming that the West left him no other choice.

Waking to the second day of Russia's invasion, horrified civilians found themselves at risk as artillery shells rained down on some residential buildings on Kyiv's outskirts.

After 8 p.m., a large boom was heard near Maidan Nezalezhnosti, the square in central Kyiv. And the mayor said five explosions struck near a major power plant just outside the city. The causes of the explosions was not immediately known.

Ravina Shamdasani, a spokeswoman for the U.N. High Commissioner for Human Rights, said its staffers have so far verified at least 25 civilian deaths and 102 injured, mostly from shelling and airstrikes.

A spokeswoman for the U.N. refugee agency, Shabia Mantoo, said more than 100,000 people were believed to have left their homes in Ukraine and that “up to 4 million people may flee to other countries if the situation escalates.”

Thousands of Ukrainians crossed Friday into neighboring countries to the west in search of safety from the unfolding war in their country.

With men of military age banned from leaving the country, most of those who crossed borders were women, children and the elderly.

One woman from Kyiv who arrived in Przemsyl, Poland, described how men were pulled off trains in Ukraine before they got to the border.

Cars were backed up for several miles at some border crossings as authorities in Poland, Slovakia, Hungary, Romania and Moldova mobilized to receive the Ukrainians, providing shelter, food and legal help. These countries also eased their usual border procedures, including COVID-19 testing requirements.

The pope broke protocol with an in-person visit Friday to the Russian Embassy to “express his concern about the war” in Ukraine.

Pope Francis’ extraordinary gesture was viewed as a sign of his anger at Russia’s actions, and his willingness to make a personal appeal for the end of hostilities.

The pope traveled to and from the embassy in a small white car, with Vatican officials saying they knew of no such previous papal initiative.

Reviving Cold War fears of a nuclear showdown, Putin has warned in a speech that he has the weapons available if anyone dares to use military means to try to stop his takeover of Ukraine.

Whether an empty threat or not, Putin's words re-animated the specter of nuclear war — through accident or miscalculation.

The Russian president said in a speech early Thursday that despite “losing a considerable part of its capabilities after the fall of the Soviet Union," Russia remains “one of the most powerful nuclear states" and has “a certain advantage in several cutting-edge weapons."

TURNING THE SCREWS ON RUSSIA

The West has taken a military option in Ukraine off the table, but world leaders — with the exception of Moscow ally China — are preparing measures aimed at hurting the Russian economy and its leaders, including Putin himself.

The U.S., Britain, Canada and European Union said Friday they will sanction Putin and Lavrov, his foreign minister. The EU unanimously agreed to freeze their assets.

Russian Foreign Ministry spokeswoman Maria Zakharova said the sanctions showed the “total helplessness” of the West. “Who are you going to talk to? ... A nuclear power, a great country; who have you decided to play with?” Zakharova said in televised remarks.

Asian and Pacific countries have joined the West in taking punitive measures against Russia, including export controls aimed at starving its industries and military of semiconductors and other high-tech products.

In retaliation to a British ban on Aeroflot flights, Russia’s civil aviation authority forbade U.K. flights to and over Russia starting Friday.

And in pop culture, the wildly popular Eurovision song contest also banned Russia from the May finals in Turin, Italy.

SPORTING WORLD TURNS ITS BACK

Russia has been stripped of hosting the Champions League final by UEFA w ith St. Petersburg replaced by Paris, and Formula One dropped this season’s Russian Grand Prix in Sochi in September

The showpiece final in the European men’s football season will still be held on May 28 but at the 80,000-seat Stade de France.

The International Ski Federation announced Russia will not host any more of its World Cup events this winter, and the European curling championships scheduled to be held in November in Perm, Russia, will also be relocated, the sport’s international governing body announced on Friday.