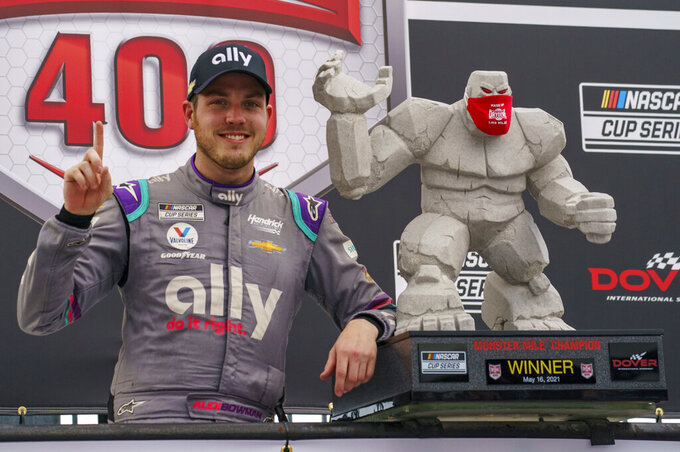 The Hendrick Motorsports train rolls into Sonoma Raceway on a three-race winning streak that pushed it past Petty Enterprises as NASCAR's winningest organization.

Think the juggernaut will be stopped Sunday at NASCAR's first visit to California in nearly two years?

It's going to be tough.

Sure, Martin Truex Jr. is the two-time defending race winner dating to 2019, the final time before the pandemic that NASCAR stopped at the picturesque rolling road course in wine country. In the time since, though, reigning Cup champion Chase Elliott has become king of the road and the four Hendrick cars have hit a different dimension.

Truex is the last non-Hendrick driver to win a race, nearly a month ago at Darlington Raceway. Since then it has been all Hendrick Motorsports, starting with an Alex Bowman 1-2-3-4 sweep at Dover. Elliott then got the win at Circuit of the Americas in Texas over teammate Kyle Larson when the race was called for rain, and Larson last Sunday beat Elliott at Charlotte to give Rick Hendrick his 269th Cup win — one more than Richard Petty-owned cars.

Out in wine country, Elliott will be seeking his first career victory at Sonoma. But six of his 12 career wins are on road courses, including five of the last six stops. Those six wins tie him for third on NASCAR's all-time road course win list with Bobby Allison, Richard Petty, Ricky Rudd and Rusty Wallace.

Sonoma was not good to him in four previous visits, with a fourth-place finish in 2018 Elliott's best result. He led the first three laps of his career at Sonoma in 2019 but dropped out of the race 30 laps short of the finish with an engine issue.

“Sonoma is a place that I haven’t done a very good job in the past,” Elliott said. “It’s been a pretty big challenge for me. It’s been a couple of years since we’ve been there, so it’s been a while. When we were there in 2019, I felt like we were doing a great job and in a good position before we had our mechanical issue, so I’m looking forward to getting back and having another shot at it.”

NASCAR has raced at Sonoma 31 times since its inaugural 1989 event on two different configurations of the track.

The famous Carousel was eliminated in 1998 in favor of a chute that shortened the track to 1.949 miles, but Speedway Motorsports scrapped that after the 2018 race. Now the Carousel is back and the multi-elevational layout is 12 turns over 2.52 miles with several high-speed sections.

NASCAR used a higher downforce package when it raced Sonoma last in 2019, and it returns with lower downforce and no practice or qualifying because of pandemic precautions. The Carousel goes down from Turn 4 through Turns 5 and 6 before leading into the course’s longest straightaway and the Turn 7 hairpin.

Truex went to the Toyota simulator earlier this week “just to kind of reacclimate myself to the track,” but drivers aren't sure what to expect with this downforce package and the Carousel.

“I think it’s just a really awkward corner, and it doesn’t feel like a corner a race car should be going through,” said Cole Custer, who has only run a K&N Pro Series West race on the configuration.

“It’s really tight, really downhill, off camber. It’s just a really tough corner, and it’s something that you never go through there and feel like you did it right. It never feels natural, so it’s one of those things you just kind of have to hit your marks and make sure you don’t overdo it through there.”

ODDS AND ENDS: Elliott is the 11-5 favorite to win Sunday, according to FanDuel Sportsbook. ... Truck Series regular Ben Rhodes will make his Cup Series debut driving for Spire Motorsports in the No. 77 Chevrolet. He won the truck race on the Daytona Road Course earlier this year and is the fifth different driver to pilot the No. 77 for Spire this season. ... There are five California natives in the field, including Cole Custer from Ladera Ranch and Tyler Reddick from Corning, both making their Sonoma debuts.