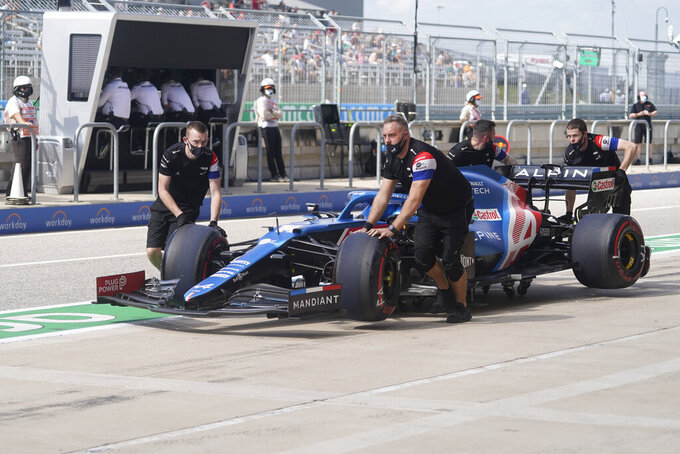 The crew for Alpine driver Fernando Alonso, of Spain, push his car back to the garage during a practice session for the F1 US Grand Prix auto race at the Circuit of the Americas, Friday, Oct. 22, 2021, in Austin, Texas. (AP Photo/Darron Cummings) 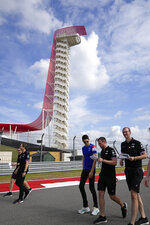 AUSTIN, Texas (AP) — The red-hot rivalry between Max Verstappen and Lewis Hamilton returned to the race track with a flip of the finger and an insult.

It was only practice but the exchange Friday between the Formula One title contenders made for a spirited opening day of the U.S. Grand Prix and showed this championship duel between the Red Bull and Mercedes drivers is just hitting its peak heading into the final six races of the season.

Welcome back to Texas y’all.

It was mere minutes into the second practice when Verstappen and Hamilton found themselves side-by-side entering the long straight at the starting grid.

Verstappen said he was first to the spot, but Hamilton sprinted with him all the way to the end and took the inside line into the corner. It was the sort of risky, wheel-to-wheel move drivers seldom make in practice, especially these two given their history of collisions this season.

Verstappen backed off, but flipped Hamilton his middle right finger and called Hamilton a “stupid idiot” in a radio message to the Red Bull garage.

“Ignore it,” was the message back from the team.

It’s impossible to ignore what's to come between those two in Sunday’s race and beyond. Verstappen clings to a miniscule six-point lead over Hamilton for the season championship as the 24-year-old Dutchman chases his first championship.

Hamilton, 36, has won seven championships and an eighth would break his tie with Michael Schumacher for most in F1 history.

“I don’t know, we were all lining up to go for our laps and I don’t really understand what happened there,” Verstappen said of the clash with Hamilton.

The Texas race is the first of a two-part swing in North America as the series heads next to Mexico City. Both races were canceled amidst the pandemic last season.

Mercedes has been dominant the Austin track, winning five times since it opened in 2012. Hamilton has won four of those races and teammate Valtteri Bottas won in 2019. Bottas and Hamilton went 1-2 in Friday morning's first practice.

Verstappen was third behind the Mercedes drivers in the first session, and the incident with Hamilton in second practice was another frustration for the Dutchman. Verstappen was well off the leaders pace in the afternoon while Red Bull teammate Sergio Perez was fastest.

But it wasn't smooth sailing in the Mercedes garage. Bottas' car needed an internal combustion unit change and he'll have a grid penalty Sunday. Hamilton had the same issue two weeks ago and another engine issue at this stage of the season could have a huge impact on the championship.

“I think you see that we are suffering with reliability this year,” said Mercedes boss Toto Wolff. “We are trying to really get on top of the problems. Points lost can be decisive.”

Formula 1 hasn’t seen such a tight championship battle since Hamilton lost out to teammate Nico Rosberg in 2016. The series hasn’t had two teams fighting it out so late in the season since 2012, when Red Bull’s Sebastian Vettel rallied late to beat Ferrari’s Fernando Alonso.

The race weekend is expected to draw massive crowds with Sunday’s race expecting a capacity 140,000. Although the entire series is experiencing increased attention and energy in the U.S., at COTA it is Perez who is the star of the show.

The native of Guadalajara, Mexico, brought huge cheers when his car was the first one on the track in the morning, and again when he paced the second practice. He drew at least 10,000 spectators to a demonstration in downtown Dallas last weekend, and it's all just a preview of what’s to come for him next week in Mexico City, where he is adored.

“I don’t feel so far away from my people, and the support I receive in the United States is incredible,” Perez said “Without a doubt, I will be the driver with the most support on Sunday.”

Off the track, reports of Michael Andretti's bid to take over Alfa Romeo continued to flow through the paddock. The American owner of Andretti Autosport and son of former F1 champion Mario Andretti has been vocal in his bid to expand his reach into F1.

Zak Brown, the American head of McLaren and a friend and business associate of Andretti's, wouldn't disclose how close Andretti may be on a deal.

“What I can say is he’s very serous about Formula One. He loves Formula One," Brown said. "Obviously, he’s got a lot of history, including his father being a world champion. I think it would be great if Michael and the Andretti name was involved in Formula One. We’ll see what happens.”

There's been rampant speculation that Andretti will attempt to move 21-year-old American IndyCar driver Colton Herta to F1 if he can get Herta the license required to compete. But even without Herta there still may be an American driver on the way.

Williams said Friday it signed 20-year-old Logan Sargeant to its driver development academy after three seasons in Formula 3. F1 hasn’t had an American driver since Alexander Rossi’s brief stint with Manor at the end of 2015.

“We expect him to move up fast,” Williams Chief Executive Jost Capito said. “We will have a good program for him.”