Formula One finale to be reviewed by FIA for future lessons 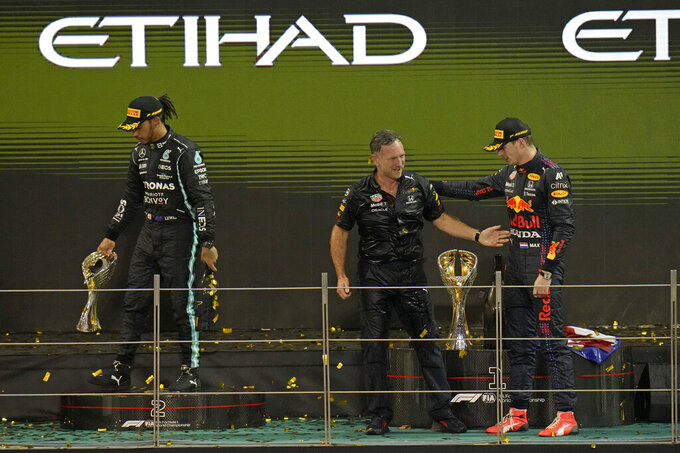 Red Bull team chief Christian Horner, center, celebrates with his driver Max Verstappen of the Netherlands after winning the Formula One Abu Dhabi Grand Prix in Abu Dhabi, United Arab Emirates, Sunday, Dec. 12, 2021. Max Verstappen ripped a record eighth title away from Lewis Hamilton, left, with a pass on the final lap of the Abu Dhabi GP to close one of the most thrilling Formula One seasons in years as the first Dutch world champion. (AP Photo/Hassan Ammar)

ABU DHABI, United Arab Emirates (AP) — The motorsports governing body for Formula One said Wednesday it will conduct “a detailed analysis" of the wild ending at the season finale that decided the championship in favor of Red Bull driver Max Verstappen.

The FIA said Sunday's title-deciding Abu Dhabi Grand Prix had created a controversy that is “tarnishing the image of the championship.”

Verstappen claimed his first world title when he passed Lewis Hamilton of Mercedes on the final lap. He was given the opportunity after a key decision by race director Michael Masi.

Hamilton had led 51 of the 58 laps until a crash by Nicholas Latifi brought out the safety car with five laps remaining. Verstappen stopped under yellow for a fresh set of tires, and Masi flipped his decision and let the drivers separating Verstappen from Hamilton pass the safety car under yellow.

The race resumed with one lap remaining and Verstappen restarting second behind Hamilton. He passed Hamilton in the fifth turn and won his first title.

Mercedes filed two appeals that were dismissed and has now asked for a further review from the International Court of Appeal. Verstappen is set to receive his championship trophy Thursday night.

The FIA delivered a report on the incident Wednesday to the World Motor Sport Council in Paris, then said in a later statement the finish “notably generated significant misunderstanding and reactions from Formula One teams, drivers and fans." It said the argument "is currently tarnishing the image of the championship and the due celebration” of Verstappen and constructors’ title winner Mercedes.

The review will be to “draw any lessons from this situation and clarity to be provided to the participants, media, and fans about the current regulations.”

“It is not only Formula 1 that may benefit from this analysis, but also more generally all the other FIA circuit championships," the FIA said.

Verstappen, meanwhile, said Wednesday he feels “a bit sorry” for Latifi because of the online abuse he has received since his crash. Latifi, a Canadian who drives for Williams, has faced a barrage of criticism since Sunday that was exacerbated when Verstappen’s boss, Christian Horner, joked he’d give Latifi a lifetime supply of Red Bull for the race-altering crash.

Latifi has apologized for influencing the outcome and said he made a mistake.

“I think this is very unfair. Every driver tries to do their best,” Verstappen said. “I think nobody crashes on purpose. I feel very sorry for Nicholas. I think what is important for him is just to turn off your phone and don't listen to it.”

Horner said it was time for the controversy to end. Mercedes boss Toto Wolff texted his congratulations to both Verstappen and Horner, the Red Bull winners said, and Horner was ready to move on.

When asked by The Associated Press if he would feel differently if it had been Verstappen who had a nearly 12-second lead wiped out and then lost the championship, Horner said a number of variables out of Red Bull's control came into play that decided the race.

“We didn't ask Nicholas Latifi to crash, that happens, and that's the risk that you take,” Horner said. "And we found it surprising that Mercedes strategically, you know, they left Lewis out on a set of tires that had to have been close to 40 laps on them. So of course, if the race were to restart, he was going to be vulnerable.

“Strategically, that was a mistake. I think we made the right strategy call, and as the following car on a track that isn't easy to overtake, Max still had to make that pass. And he did it," he said. "A safety car caused by Williams gave us an opportunity to throw something strategically at those last five laps and it paid off."