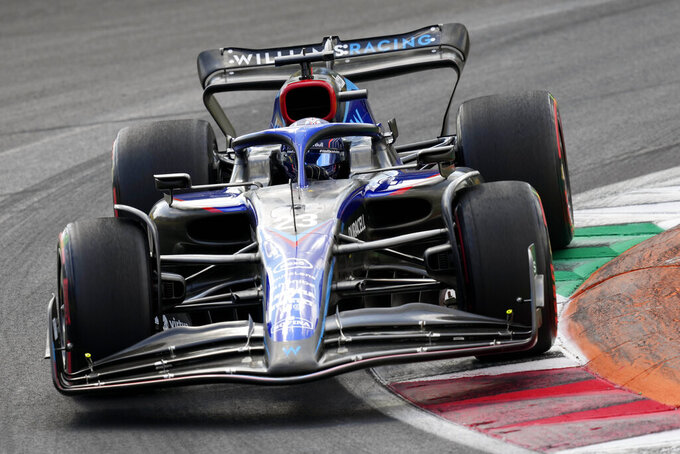 Williams driver Alexander Albon of Thailand steers his car during the first free practice at the Monza racetrack, in Monza, Italy, Friday, Sept. 9, 2022. The Formula one race will be held on Sunday. (AP Photo/Antonio Calanni)

MONZA, Italy (AP) — Formula One driver Alex Albon suffered “respiratory failure” and had to be put on a ventilator following complications from surgery.

Albon was ruled out of the Italian Grand Prix with appendicitis on Saturday morning and underwent successful surgery but then had to be moved to intensive care as he required assistance breathing, his Williams team said in a statement on Monday.

“Following surgery, Alex suffered with unexpected post-operative anaesthetic complications which led to respiratory failure, a known but uncommon complication,” Williams said. “He was re-intubated and transferred to intensive care for support.

“He made excellent progress overnight and was able to be removed from mechanical ventilation yesterday morning. He has now been transferred to a general ward and is expected to return home tomorrow. There were no other complications.”

Williams added Albon is focused on recovery and preparation for the next race, the Singapore GP on Oct. 2.

Albon signed a multi-year contract extension to continue driving for Williams last month. The Thai driver has picked up four points this season with a ninth-place finish in Miami and 10th-place finishes in Australia and Belgium.

Albon, who took part in both practices on Friday, was replaced at Monza by the team’s reserve driver and Formula E champion Nyck de Vries. The Dutchman finished an impressive ninth to score points on his F1 debut.