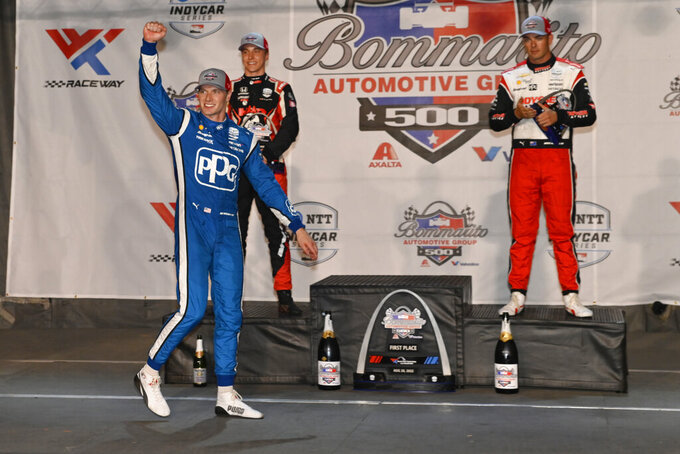 Fast facts: Larson's victory was his second of the season and the 11th in a row for Chevrolet on a road course. ... Elliott clinched the regular season title and Larson moved to second in the points race. He's the eighth multiple race winner of the season. ... Ryan Blaney is 25 points ahead of Martin Truex Jr. for the final playoff spot if there's not a 16th different winner in the final race of the regular season. ... Kurt Busch will miss his fifth consecutive race while recovering from a concussion sustained at Pocono. He received an injury waiver from NASCAR, and because there can be no more than 16 regular-season race winners, he’ll still be in the playoffs if he’s recovered in time.

Last race: Kyle Larson grabbed the lead with five laps to go at Watkins Glen when teammate and leader William Byron and Ty Gibbs spun in front of him.

Fast facts: Runner-up A.J. Allmendinger posted his 19th top 10 finish through 22 races and leads Gibbs by 61 points and Justin Allgaier by 70 with four races remaining before the 12-man playoffs begin. ... Byron, who led 35 laps, and Gibbs, who led 25, made contact again during the final laps and finished 25th and 27th, respectively. ... Allgaier finished 38th — last — after an early crash. ... Sammy Smith, 18, was third in just his fourth career start and led seven laps.

Last year: Max Verstappen won after starting on the pole.

Last race: Verstappen, the defending series champion, overcame a spin and his worst starting spot of the season to win the Hungarian Grand Prix, his second victory in a row and eighth in 13 races, stretching his championship lead.

Fast facts: Verstappen leads Charles LeClerc by 80 points and Red Bull teammate Sergio Perez by 85 through 13 of 23 races. ... LeClerc has won seven poles; the rest of the drivers in the series have combined to win six. ... The top seven drivers in the points are the only ones to have finished in the top three in any race and only four have won at least once.