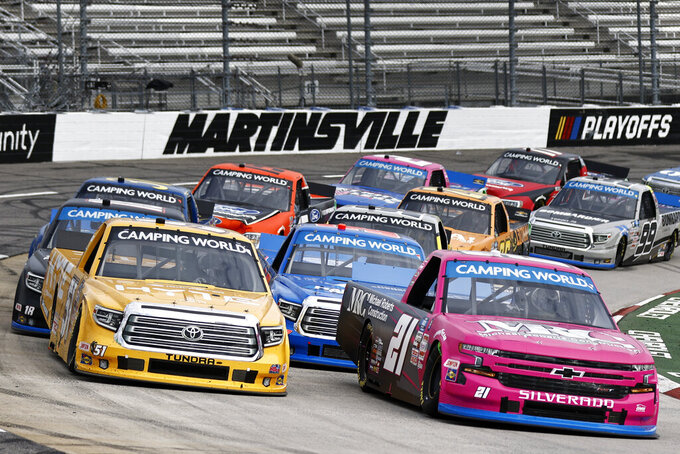 Driver Zane Smith (21) leads Corey Heim (51) and the rest of the field on a restart during the NASCAR Truck Series race on Saturday, Oct. 30, 2021, in Martinsville, Va. (AP Photo/Wade Payne)

PHOENIX (AP) — Matt Crafton sat his 8-year-old daughter on his lap and said he had no trouble teaching her how to race with respect — the ins and outs of racing etiquette — as she starts her karting career.

“I’m not going to be here and be their dad and tell them what they’ve done right and wrong,” Crafton said.

With a Truck championship berth at stake, tensions and tempers flared last week at Martinsville Speedway and respect was the hot topic out of the race.

Sheldon Creed lost a chance to defend his series championship and exchanged words with Crafton, accusing him of racing without respect in the closing laps. John Hunter Nemechek nearly lost a spot in the field when Austin Wayne Self wrecked him out of the race. And yes, respect — or perceived lack of it — was on the tip of Nemechek’s tongue.

Crafton believed cooler heads would prevail with the Truck championship on the line Friday at Phoenix Raceway. Crafton, Nemechek, Ben Rhodes and Zane Smith in the championship four. The first to finish out of the four contenders is the 2021 champion.

Smith, in a bigger fight for his racing career, said there’s enough room on the track for contenders to get their space.

“I feel like always the ones that complain about how rough we are, are the ones that are the roughest,” Smith said. “I mean, there’s the veterans in this sport that like to pull that card of giving them respect because they’re the veteran. I don’t know, make room because there’s new guys here.”

Nemechek, the series leader with five wins, paced in the Kyle Busch Motorsports hauler over the final laps at Martinsville and his 39th-place finish was good enough to get him into the field.

“It was a helpless feeing sitting there on the sideline not being able to do anything about your position,” he said.

Unlike Crafton, Nemechek had concerns that undisciplined driving could affect the outcome.

“You don’t know how others are going to race,” he said Thursday. “Whether it’s playoff guys or non-playoff guys. It goes back to what everybody’s been preaching for a quite some time now. It’s respect more than anything. I was that young guy at one point coming in that didn’t know any better than just go out there and race everybody just as hard. I expect that when we race tomorrow.”

Nemechek took an unconventional road to Truck Series contention. Nemechek had just three top-10 finishes in Cup last year and was out of his ride at the end of the season. Rather than join a team not capable of winning races, he dropped down to drive Kyle Busch’s truck to prove he’s competitive. Nemechek made the most of his move and he was the points leader most of the season.

Like Nemechek a year ago, the 22-year-old Smith faces a cloudy future.

Smith tries keep his focus on winning the championship that eluded him last season, when he was runner-up at Phoenix. His GMS Racing team is moving to the Cup Series next year. Smith said he asked his representatives to not discuss any potential rides for next season until after Sunday.

“Wins and championships make that happen,” he said. “This is my life. I don’t have a family. I don’t have something to fall back on. You make it or you don’t or you fail.”

Smith only has to look back at last week’s race at Martinsville as an example of turning the improbable into opportunity. He was last in the eight-driver field at Martinsville and had to win to earn a spot in Friday’s winner-take-all finale.

Smith snaked across the line for the win when he emerged from a three-ride scramble to the finish with the checkered flag.

By the numbers at Phoenix, the championship is truly up for grabs.

Nemechek has two second-place finishes in seven career starts, Rhodes has never finished better than fourth in six starts, Crafton has one runner-up finish in 20 starts and Smith was second in the 2020 championship race.

Only one will hoist a trophy over his head.

The others, well, they’ll find something to moan about in defeat.